We left Bordeaux the morning of the 8th and started making our way towards our first stop in Spain, San Sebastian. We needed to get there by no later than 4:30pm in order to check into our hotel room and we had about a 3 hour drive ahead of us. We seemed to have enough time to make a stop and several friends had recommended we visit Arcachon, a beach town just southwest of Bordeaux, and since it was on the way to San Sebastian, we headed there for a quick pit stop.

The town was very cute, but it was pretty chilly and windy. We checked out the beach, which not surprisingly wasn’t very populated and then had some lunch at a brasserie on the boardwalk. Everyone seemed to be ordering les moules, so we jumped on the bandwagon and enjoyed some rather delicious mussels. They were apparently so delicious, or maybe the service was just so slow as it seems to be everywhere in France, that by the time we got back to the car we realized we’d spent much too long in Arcachon and were now running late getting to our hotel in San Sebastian! Thank goodness Chris is a speed demon and has a very loose respect for the rappel (speed limit). We started the drive at 17 minutes over our scheduled arrival time, but quickly narrowed the gap and arrived just slightly late. Val jumped out of the car in hopes of catching the hotel clerk before he left, while Chris went to park the car. Check-in went smoothly, but parking not so much. Chris parked in an underground garage that’s 4 levels deep, with hundreds of spots, and multiple exits, so when he surfaced (with Val’s heavy-ass bag and his bags in tow) in a new city, needless to say he was a bit lost.

That first night in San Sebastian we did a bit of walking around and headed to Parte Vieja (the old part of town) to grab some tapas or as they’re called here, pintxos. There are tons of bars and they all have multiple plates of different pintxos lining the bar. You take a plate and just grab whatever you’d like, order a drink, and stand around eating and drinking. When you’re ready to go, you tell the barman what you had and pay. This honor system has been in effect for decades and seems to work really well! 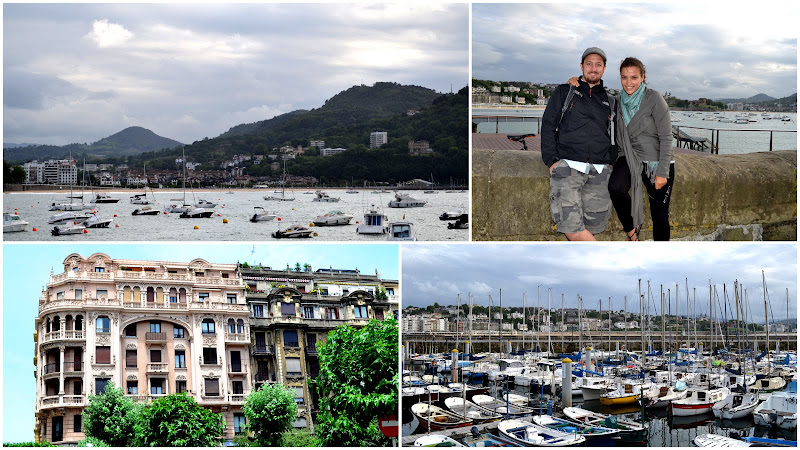 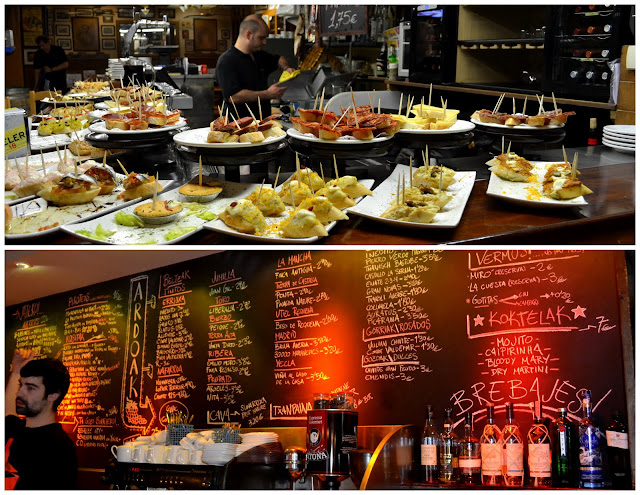 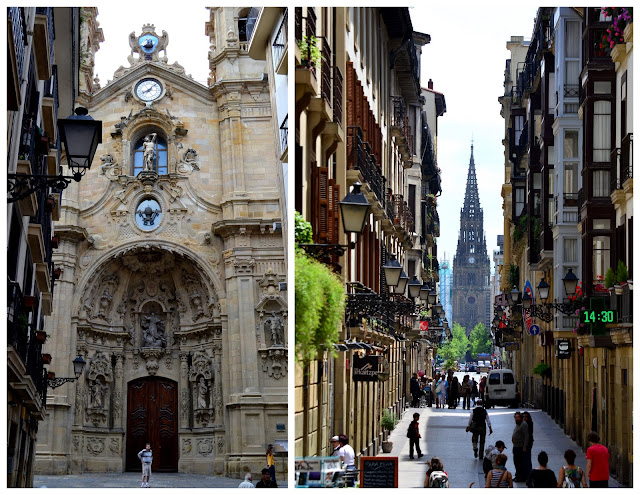 The next day we embarked on a mission to find an Orange store to purchase a micro SIM card for our iPad. After a long journey across town, we found the store, but the sales lady wasn’t the nicest and from what we could understand told us that Orange doesn’t sell those anywhere in Spain. It was so much easier in France, so why does an hour past their border make things so much harder??

Along the way we marveled at the city’s buildings. The architecture is definitely different than what we saw in France. Not quite as uniform in its old-ness, it’s taller and the facades have been restored/renovated. Interestingly, most of the buildings here are 5 stories, whereas in Bordeaux most were 3 stories, we’ll have to look up why. You still get the old world feel with the decorative accents, iron work, and heavy brick, but it feels more modern and urban. We also checked out the beach. It was not a warm day by any means, but there were actually people surfing and sunbathing (in the nude!). 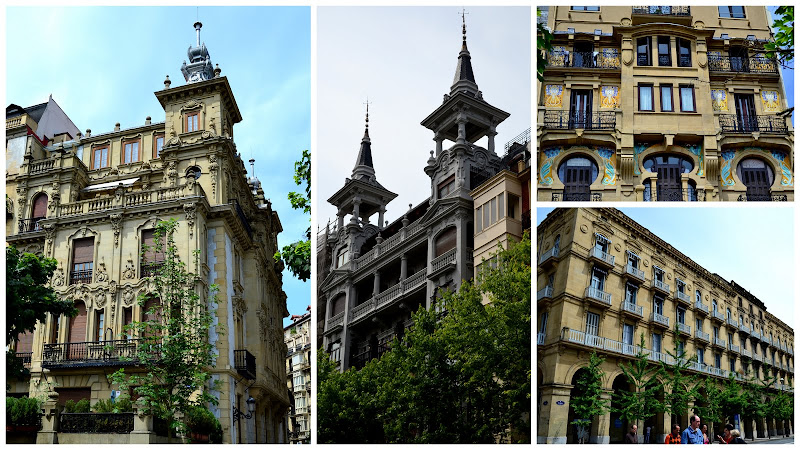 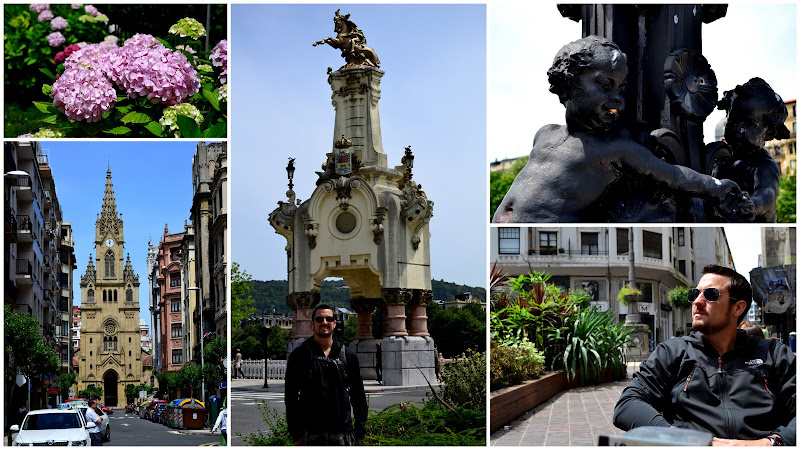 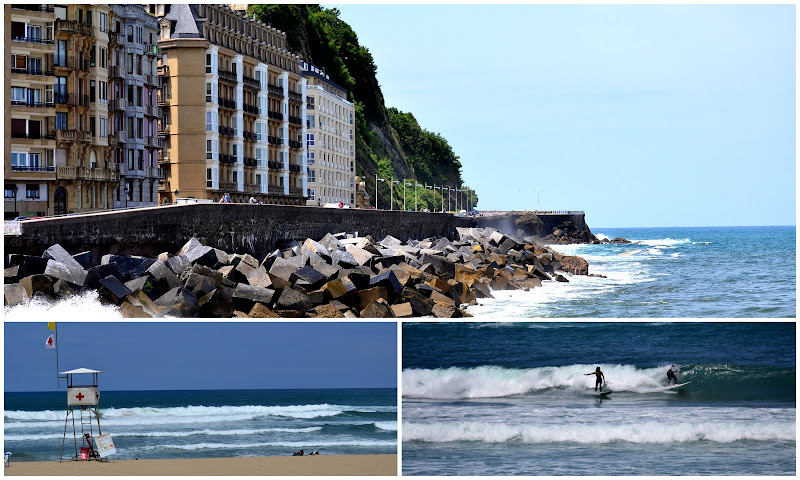 The day before we’d seen a huge statue of Jesus perched on top of big hill/small mountain, so we headed to Monte Urgull Mendia to see him up close. Instead of taking the easy way, which was a long, winding stroll around the mountain, our American need for immediate gratification had us hiking straight up one incredibly steep set of steps after another. We saw this as a challenge, but it wasn’t nearly as challenging as dodging all of the dog poop left to surprise us in random places. People don’t pick up their dog’s shit here!

The view was beyond stunning, a full panorama of the whole city! 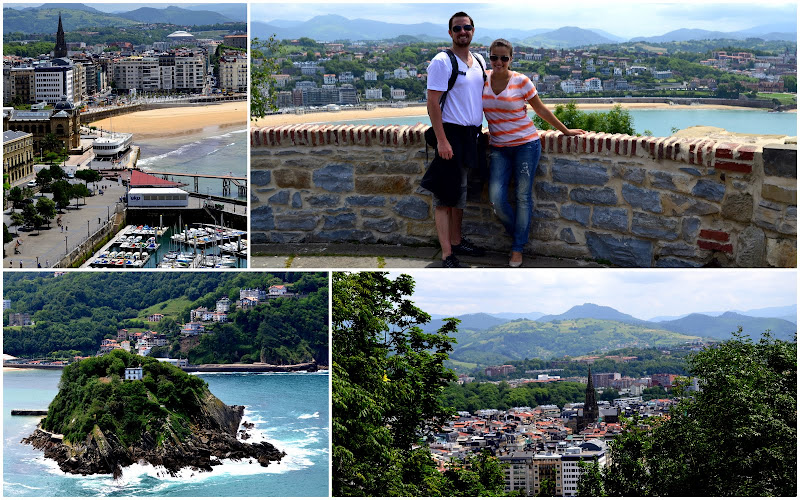 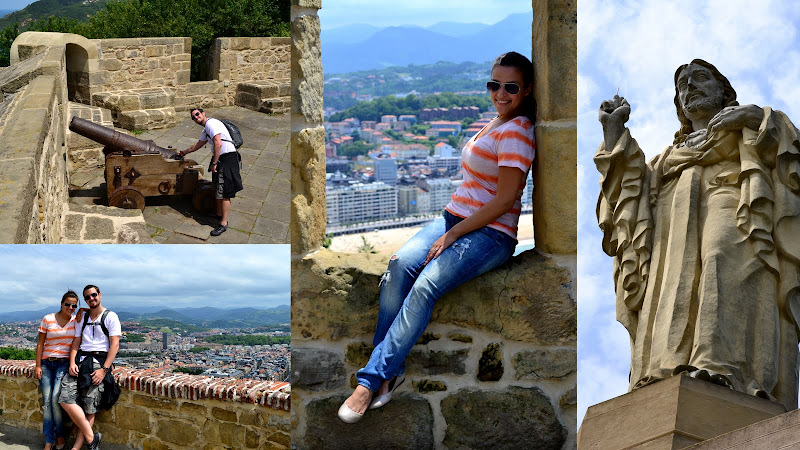 After our climb we head back to Parte Vieja for dinner. On our stroll the previous night we had noticed a restaurant, ‘A Fuego Negro’, which carried a Michelin guide recommendation. It looked like every other pintxo bar, but it had a restaurant in the back which specialized in tasting menus – we opted for the 12 course. It was some of the most unusual pairings of food we’ve had, but they oddly worked together! For example, one of the courses was crab, avocado, and licorice ice cream! We also had a fantastic waiter, Julen, who spoke great English and told us a bit about the Basque region. Highlights of the meal were a flash frozen tomato soup ball that explodes in your mouth, a juicy kobe beef slider on a sweet potato bun, and a politically-motivated dessert called ‘Regalize it!’ 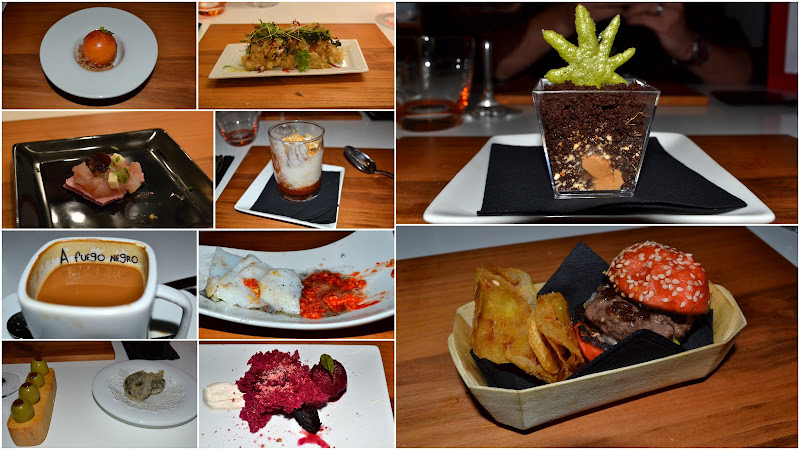 With our bellies full, we headed home through the old square where a bunch of protesters were camping out. Chris said we could have skipped the hotel and just camped along with them to save money – yeh right!! 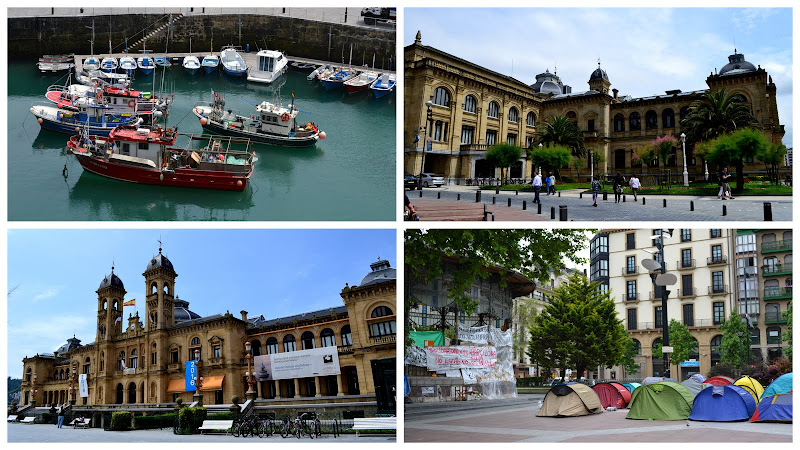 Tomorrow we leave San Sebastian in the morning and have a full day of driving to Vigo, Spain on the east coast of Spain.

We’d love to hear from you! You can comment on our posts or shoot us an e-mail.