While checking out of the pseudo hostel in San Sebastian on the 10th, the owner politely asked if the storm had disturbed our sleep. We guess there was some of the worst rain and wind they had seen in months at around 5am. We had no clue as we had only turned in at 3am, which seems to be the habit for us, and had us in our deepest sleep at the storm’s peak.

Anticipating the bad weather rolling into the region, we planned to spend the entire day trekking across north-east Spain to the coastal town of Vigo. Our total drive time was just under 8 hours, which is already a full day, but Val insisted that we make a small detour to enjoy some cultural enrichment. She’d lived in NY for 7 years without visiting the Guggenheim there, so we figured we’d make up for that by visiting the Guggenheim Museum in Bilboa – sounded like it couldn’t hurt. 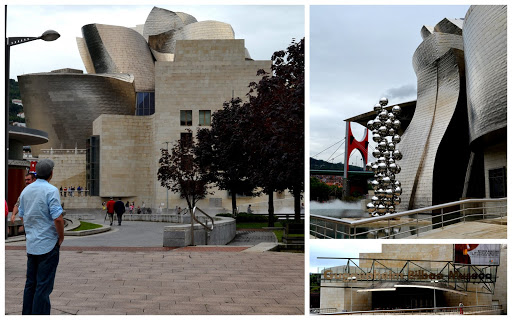 We plugged the address into Bitsy’s GPS and away we went. Arrived in Bilboa in no time and the Guggenheim is massive, so we had no problem finding it. We did however have a problem parking. It would appear, after doing multiple loops around the track as if we were racing NASCAR, that there is NO PARKING lot!  Chris was so perturbed that he wanted to leave town altogether. Luckily we found a spot on the road (cursing stopped), paid the meter (more cursing), walked past the 30 ft tall cat/dog (you decide) and paid our €16 entrance fee. 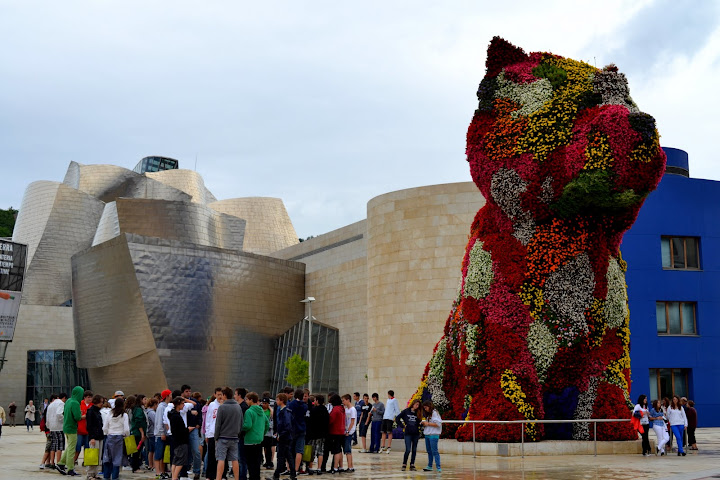 The Guggenheim is a museum of modern art. That feels like a factual statement and most of you read it as such. Two problems though; (1) there was nothing in the thing to hold even the most inquisitive mind in a state of muse and (2) we didn’t see a single thing that fit any definition of art. No one clocked us and we didn’t ask Guinness to weigh in, but we may have broke the record for least time in this 100,000 sq ft building. No more modern art for us. We struck out at Whitney in NY and this put the final nail in that coffin.

Back on the road with 7.5hrs to go. 20 years ago that would have been lots of counting sheep and listening to Spanish radio. 10 years ago that would have been counting sheep but listening to your favorite collection of CDs. In 2011 it is no sheep and watching the first 6 episodes of The Wire (HBO series) on your iPad 2. God bless technology!  Best part of this technological marvel was that Val had to hold the iPad in place on the dash with her toe.  Hi-tech meets low-tech in a perfect marriage and no it is not unsafe to drive and watch TV at the same time.

Vigo was a quaint little coastal town. We got a tip from a local as to where we could get some good grub and called it an early night.  It was a utilitarian stop so we only took this one picture as we pulled away (Chris took the photo, therefore it sucks – no clue how it got so jacked). 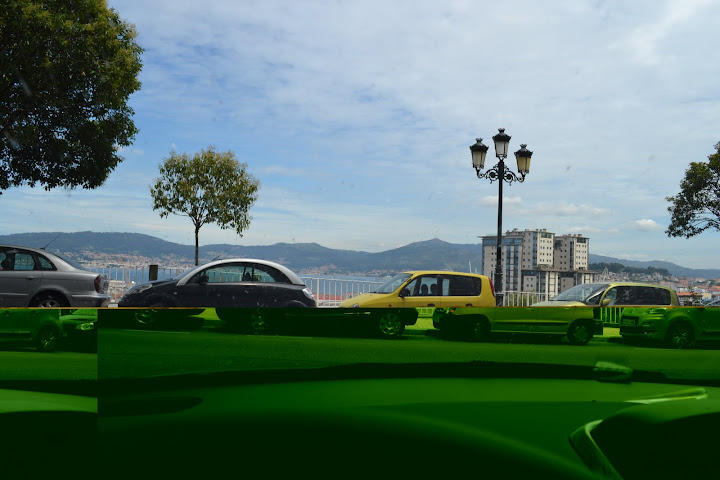 Today, June 12th, we made a quick hop down the coast and crossed into our third country, Portugal, to the town of Porto. We did our customary shopping for an iPad 3G microSIM and got some of the Colonel’s Famous Chicken and then popped back to the hotel to catch up on some emails, calls, and other administrative stuff. The highlight of the day was Val’s lesson in learning to drive a manual transmission.  It wasn’t her first, but may be her last.  She actually cried; Chris was loving and held in his laughter. (Val’s editorial note: it was extremely traumatizing, never have I felt so stupid, frustrated, and inept and now I understand how Chris must feel when I try to teach him to dance.)

Tomorrow we will climb another short mountain to get the panoramic view of this great town and then we will shoot into Lisbon to enjoy some beach time for the next 3-4 days.