Sunday morning, we checked out of our hotel and headed to the old center of Porto to find a monument which Lonely Planet said was worth a 225 step climb for panoramic views of the city. We couldn’t find it, but marveled at the beautiful old city as we drove around. The architecture is stunning, made even more so interesting by all the years and history the buildings have lived through. Many of the facades are covered with ceramic tiles, some colored, others patterned and just about all of the doors seem to have a circular iron gate above them. 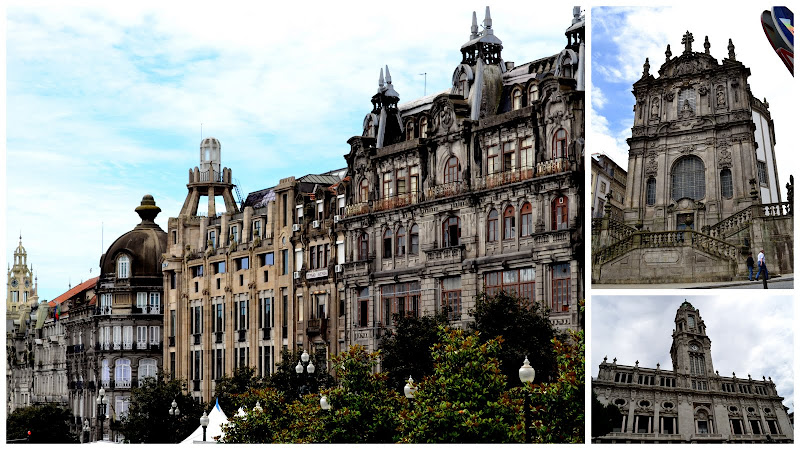 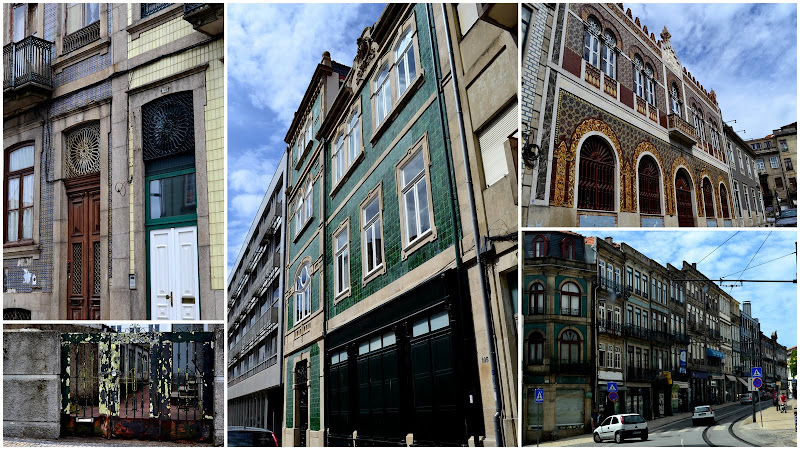 About an hour drive south, we arrived in Lisbon and checked into the Sheraton Lisboa. We’ve been staying at a series of 2 and 3 star hotels, all perfectly clean and adequately furnished, but the Sheraton is a 5 star property and we felt like kids on Christmas checking into it. Our SPG status got us upgraded to a premium room and we came off the elevator to find frosted glass walls and dark brown leather doors that opened up to sweeping views of the town, a ridiculously comfy king size bed, and a nice deep tub. The bathroom had a glass wall so that you could still see the city views while brushing your teeth. There was a big parade and street party happening later that evening and we had full intentions of going, but after a heavy dinner and several past nights of fitful sleeping, we decided we’d rather enjoy the luxuries of our room. We ended up watching the second season premiere of The Wire from the comforts of our tub…it was heaven! 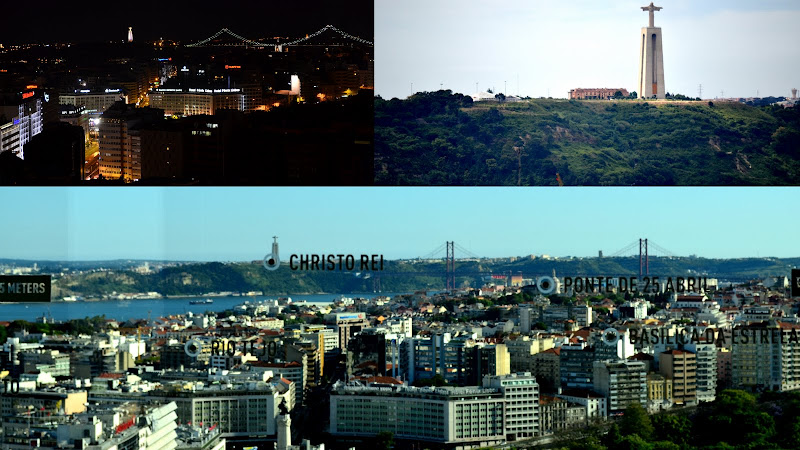 Best night’s sleep of our whole trip so far and can be attributed to two factors, 1.) you don’t appreciate a mattress until you’ve slept on a bunch of crappy ones, the W bed is like sleeping on a cloud. We fully intend on buying one when we get back, 2.) black-out curtains make for perfect caves in which to hibernate. The Batman strobe light could have been pointed at our window for hours and we’d never have noticed. All that good sleep had us sneaking into the breakfast buffet ten minutes before it closed so that we could gorge on some American breakfast food, it was the first time we’ve had scrambled eggs for breakfast since we started this trip! 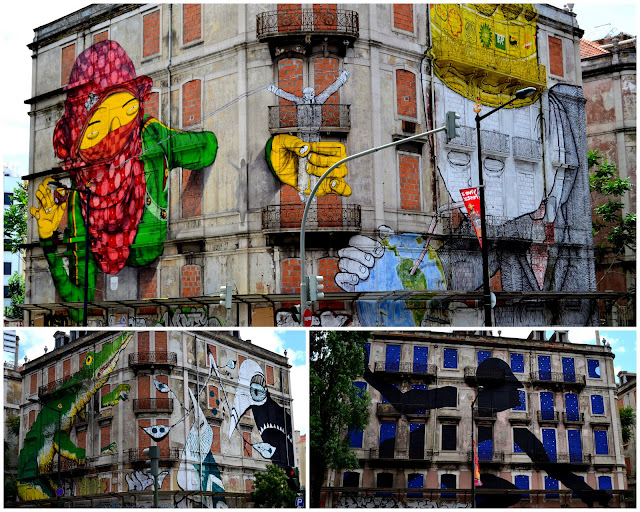 After reluctantly checking out of the hotel, we drove down to the old center (every city seems to have one) to check out some monuments, which we unfortunately can’t name at the moment as we left the map in the car. The streets were a bit perilous to navigate, not only because they were made out of uneven stones, but because they were loitered with broken glass from the festivities from the previous night – fun times with Chris making fun of Val for wearing her new white sandals at the wrong time…we’re sure this won’t be the last time this happens. We ventured up one winding alleyway after another to get some photos of the town below and then headed back down and towards the waterway to get some photos of the square. Chris buzzed his hair a couple of days ago and has been sporting his earrings again, so he’s become a prime prospect for profiling. At least three upstanding gentleman approached him offering to sell him hash…again, we’re sure this won’t be the last time this happens either. 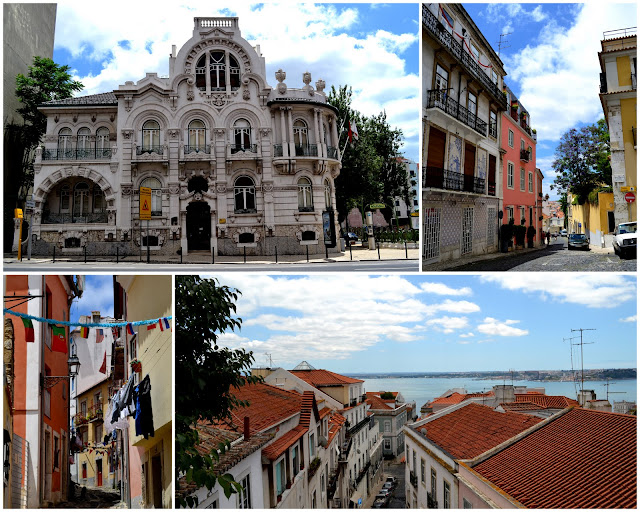 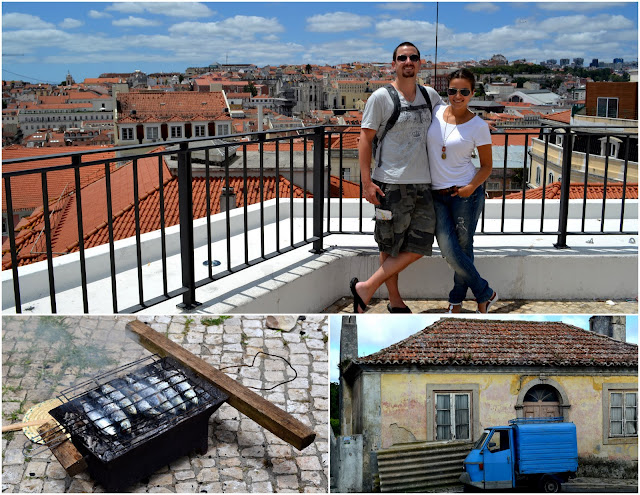 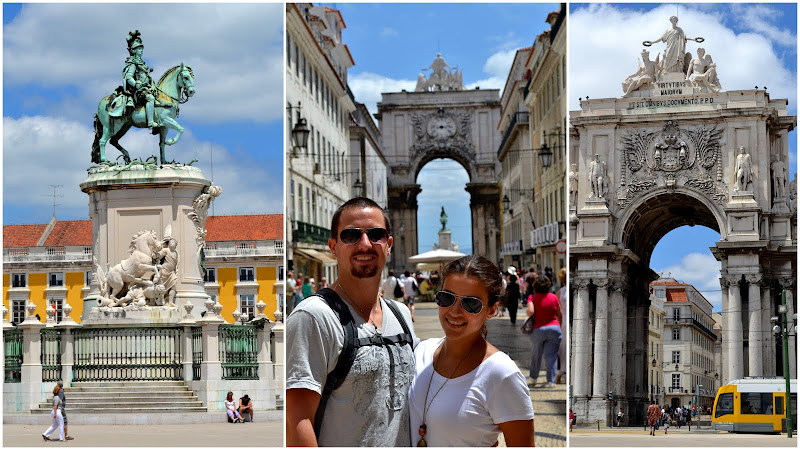 From Lisbon, we headed about a half hour northwest to the city of Sintra, which is a picturesque town with castles and palaces that royalty used to vacation in. To say Sintra is beautiful or stunning wouldn’t do it justice, it’s simply magical. The surroundings are incredibly lush, with fancy chalets built into the mountain and boulders and rock formations in the jungle-like forest. We drove up the windy mountain road to reach the Moorish Castle at the top. It was at least a 15 minute drive and we passed about ten people doing it on foot and one biker. They must have calves/buns/thighs of steel because it was all steep uphill and easily over an hour walk – more power to them, but boy oh boy were we happy we had Bitsy.

From the castle entrance to the top of the fort it was a 250m uphill climb, which Val again did in her new white sandals since she kept forgetting to change into more sensible shoes. Needless to say, said sandals are no longer so new or white…lesson learned hopefully! There were quite a few tourists doing the trek with us and its funny to hear the male/female interaction is the same in any language with the men constantly coaxing the women along to keep going up with either c’mon, allez, or da’vay. The castle ruins were super cool, but the view they offered was what took your breath away. 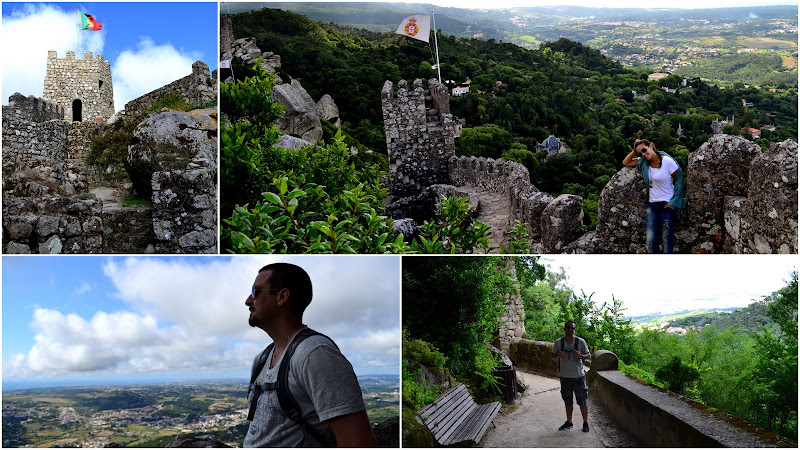 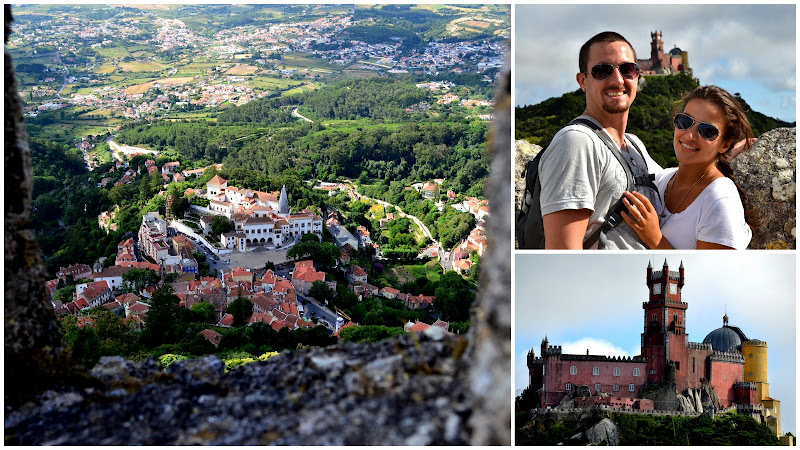 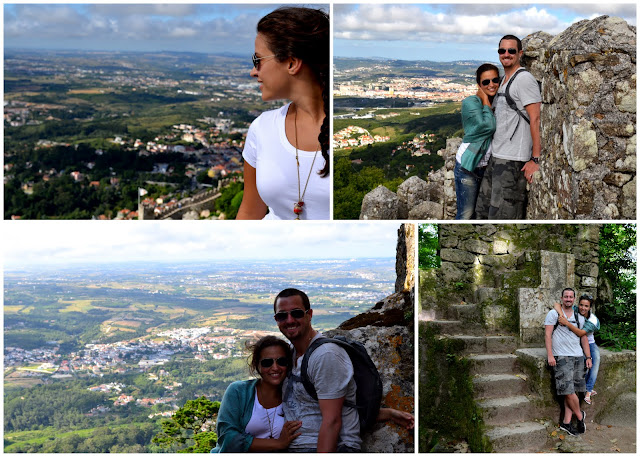 Can’t recommend visiting Sintra highly enough! Val wishes we had more time to spend here, but we had to head to Almada, a beach town just south of Lisbon, where we have hotel reservations for the next two nights. There’s definitely a difference in Chris and Val’s sight-seeing style…Chris sees something out of the corner of his eye and that’s enough for him to feel that he’s seen the place, whereas Val would have loved to explore every attraction Sintra had to offer. At least we’re compatible over bread – Chris likes the cruchy crust and Val likes the doughy middle.