We’re a few days behind in posting, but blogging is harder than it looks (it takes quite a while to download photos, edit photos, make collages of photos, upload photos to web, write post, etc), especially when one doesn’t have a good internet connection! We rented an apartment for our stay in Barcelona and as luck would have it, the wi-fi was down the whole time thanks to some kind of circuit shortage in the area. Of course, the Spanish don’t really work on weekends,  so we were left with the wi-fi generously provided by McDonald’s, which isn’t the most conducive environment to writing posts. We’re now in Lyon, France and writing from the comforts of a cushy bed at a Best Western, so without further ado, here’s all about our time in Barcelona!!

We had about three weeks worth of laundry and this was the first time we had access to a washer/dryer in our place of living, so we did a few loads and left them hanging on the balcony to dry – there’s something very quaint about the smell and warmth of sunshine on air dried clothes.

Our apartment was right around the corner from the famous Sagrada Familia and it was conveniently located across the street from McDonald’s, so it had the grand honor of being the first Barcelona attraction that we visited.

It’s an incredibly impressive and unique church, designed by Gaudi, that’s been under construction for over a hundred years (it began in 1882) and is still not completed (slated to end in 2026)!

There are two entrances, this is the more modern one – 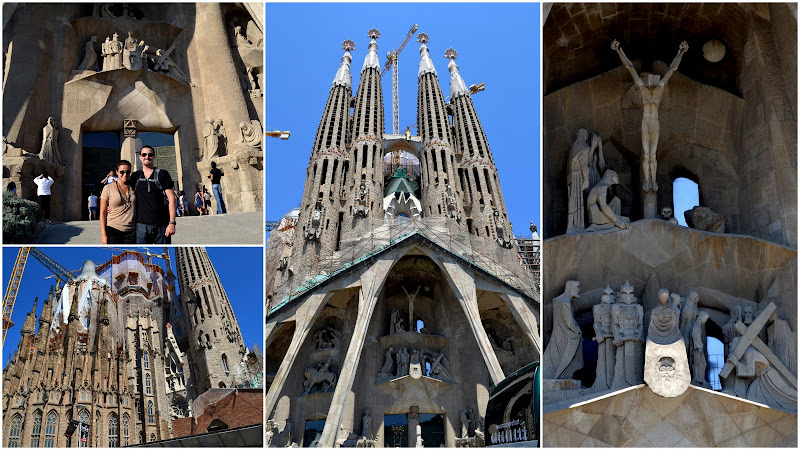 These are close-ups of the statues, designed by Josep Maria Subirachs – 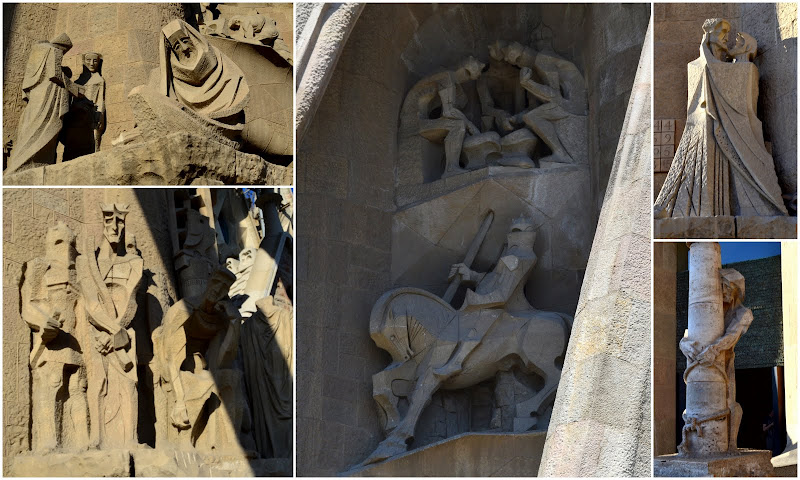 This is the interior and close-ups of some of the architectural details. Unlike anything we’ve ever seen, jaws drop as everyone marvels at how elaborate and space-like the interior is. It’s very grandiose, most of the effect coming from how tall the ceiling is, it’s easily twice the height of most basilica’s: 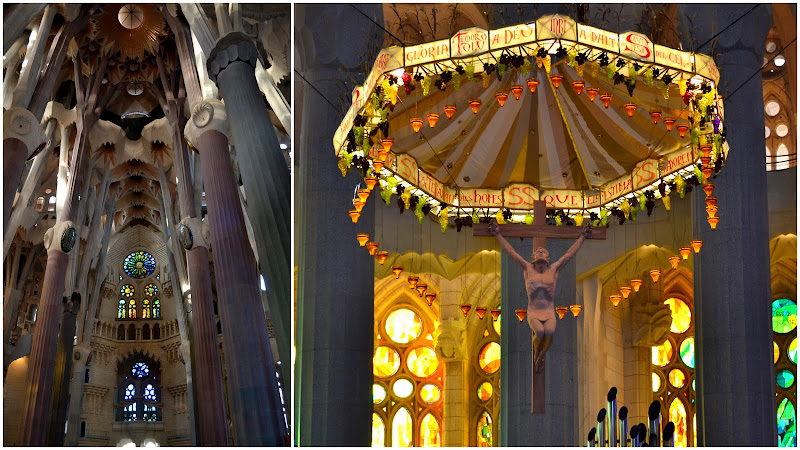 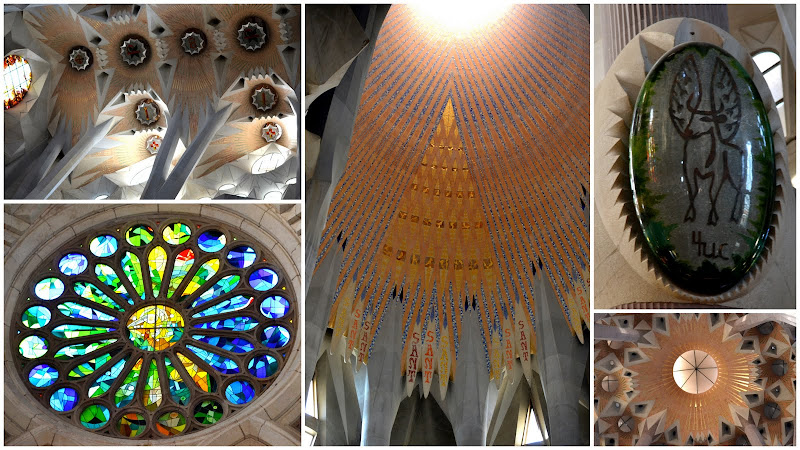 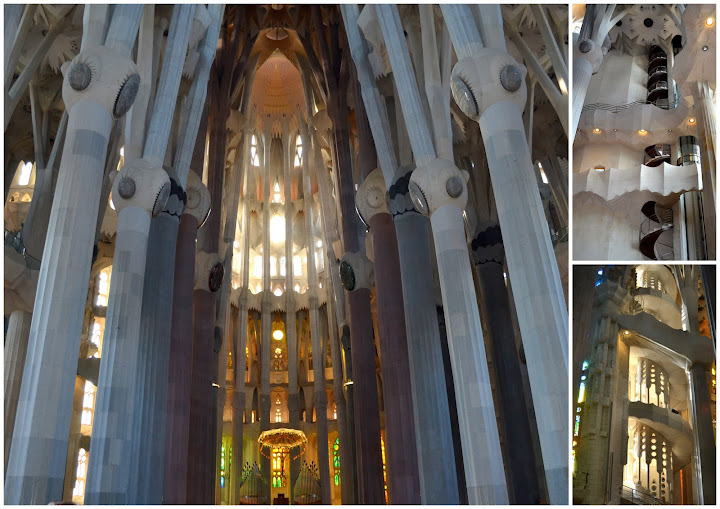 The other entrance has a different facade, focusing on the nativity story, it’s much older and way more intricate – 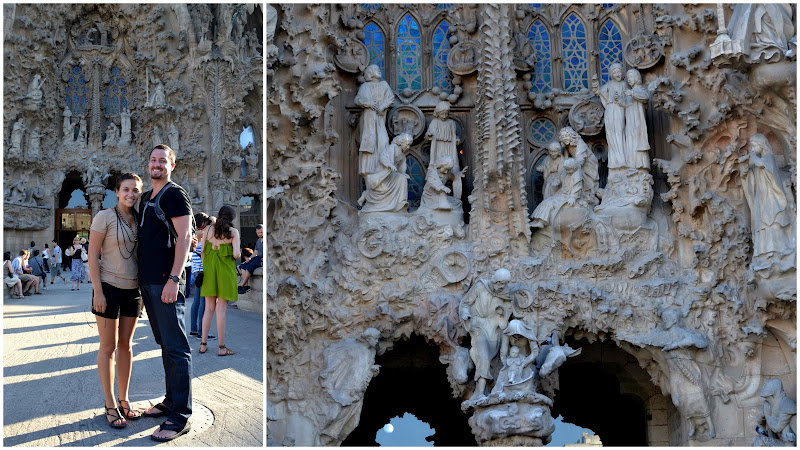 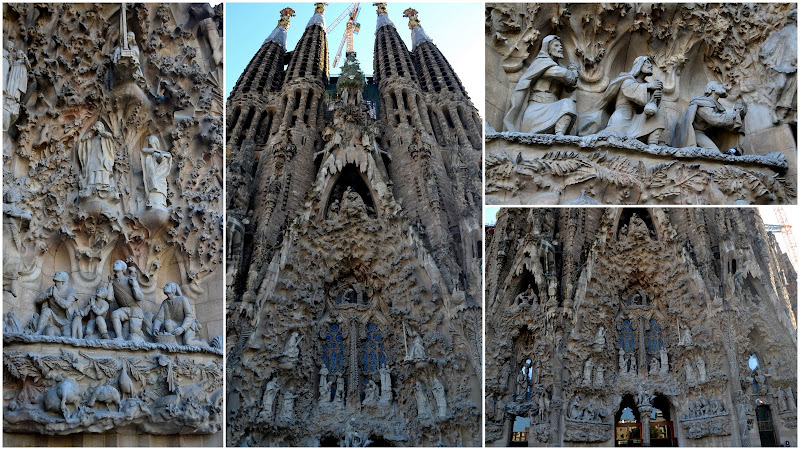 There is also a museum on premise that was very interesting and details the history of the construction of the church and Gaudi. There are plaster models of what the final structure will look like and a chart that shows which parts were completed/are scheduled to be completed. 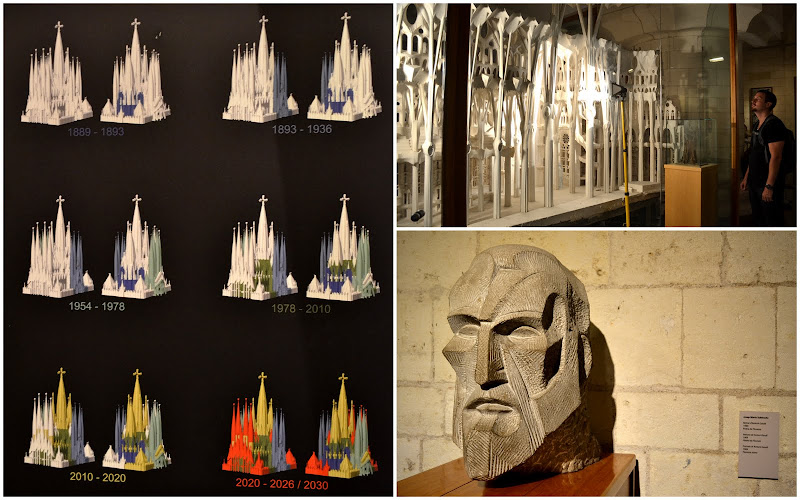 It’s really kinda crazy to think about how long this has been under construction, not to mention how much it costs!! We definitely understood why they were charging so much for an entrance fee once we’d gotten the full story. Highly recommend checking it out if you find yourself in Barcelona!

Even though Barcelona is smaller than Madrid, it surely didn’t feel that way and things felt more spread out, plus there was more to see, so once again we decided to do a sight-seeing bus so that we could optimize our time. It was a pretty sweltering day and while sitting on the upper deck means getting the best views, it also comes with constant sun on a 90+ degree day. It was worth it though, we got to see some more of the famous architecture that Barcelona is known for, the soccer stadium (the biggest in Europe), the beach, and we took a cable car to the castle on top of Montjuic- what a view that was!! 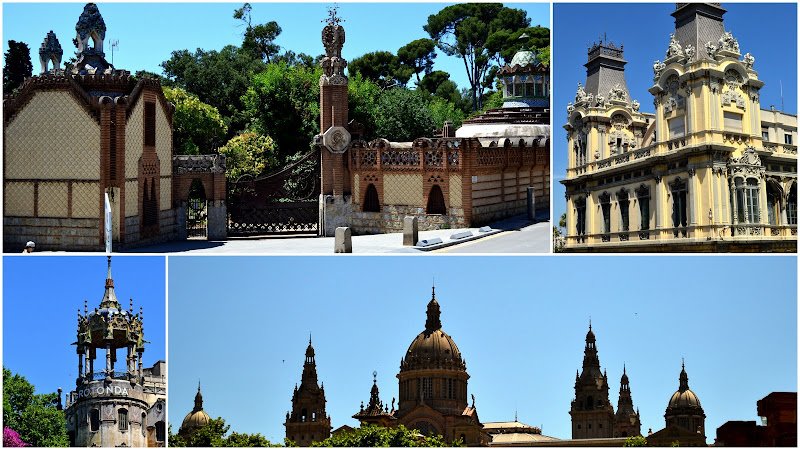 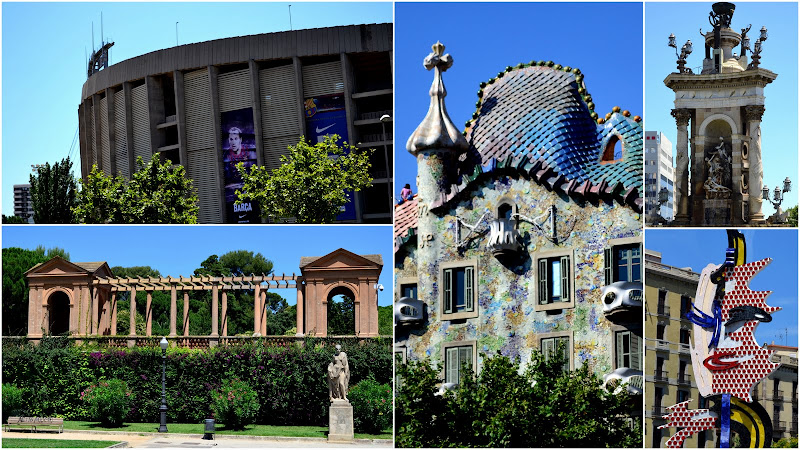 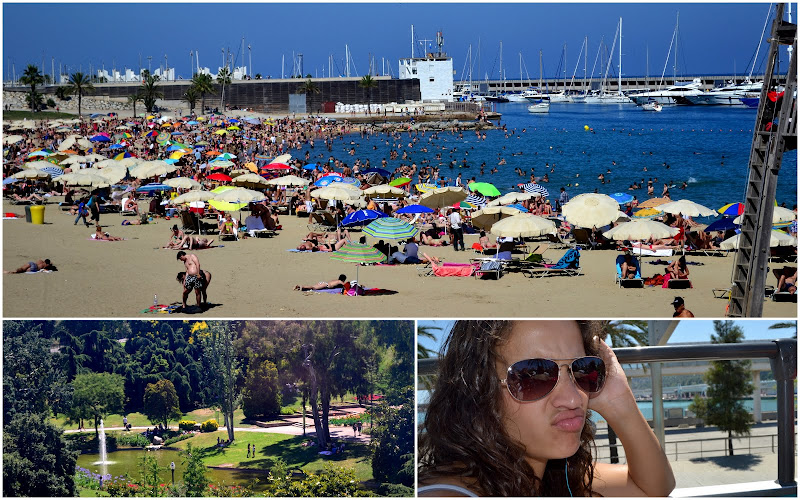 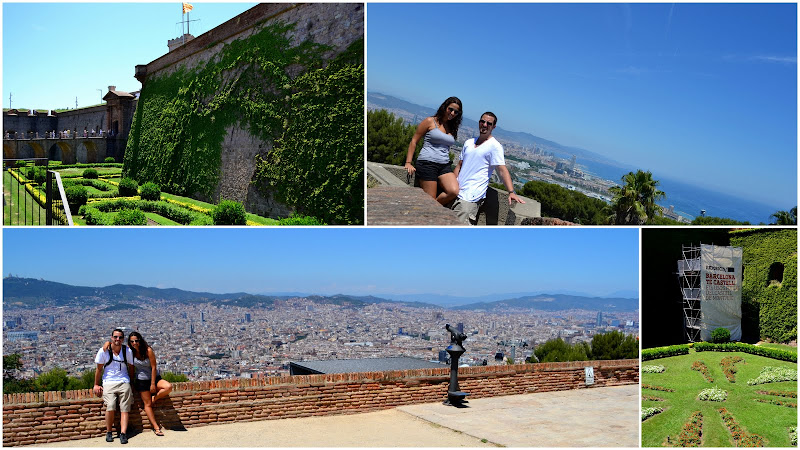 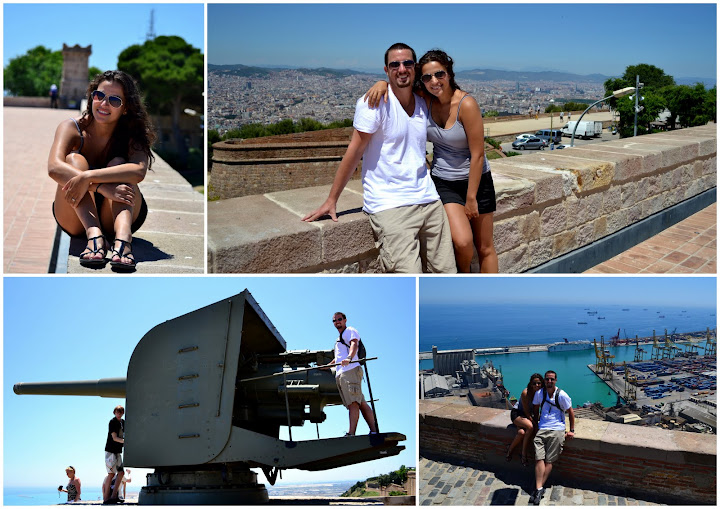 After a full day in the sun, Val did as natives would and passed out for a nap. Seizing the moment, Chris took the opportunity to explore one of the sites seen earlier on tour. It was near the beach, down the road from a statue or two and had perfectly manicured greens everywhere the eyes could wander – the Grand Casino!

Feeling that we’d gotten a good feel for the city from the previous day, we decided to explore a few areas we didn’t get to by foot on the way to the beach. We took a leisurely stroll down Las Ramblas ( a wide street with shopping, kinda reminded us of Broadway in SoHo) and popped into Boqueria Market – so many smells and colors!! The beach was great – the sand was hot, the breeze alleviated the scorch of the sun, and the chill of the Mediterranean water was definitely very welcome. We need to start being more diligent with the sunscreen as we both got a bit of a burn.

Since we slept and played poker instead of doing dinner the night before, we decided to splurge on our last night and headed to Cal Pep, which had come highly recommended both by friends and websites. What a meal!! Easily the best food we’ve had all trip and certainly the best out of Spain. We had sauteed clams (best ever!!), sauteed spinach w/ chickpeas, deep fried mixed seafood, monkfish and potatoes, tuna tartare, bread with tomato and olive oil, and flavored whipped creams. It was mouth-watering deliciousness and we’re still craving those clams!

We liked it so much, we had to take a photo with the chef – 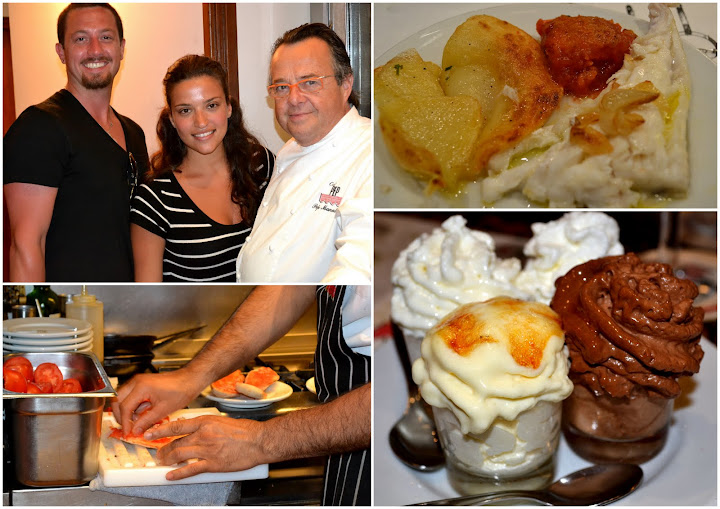 **Chris would like to note that in the above photo, he has the darker complexion…only happens a couple days a year.

With our bellies full, the last item on our agenda was to see the fountain show at Montjuic. It was still light out, so we hit up a bar with a strong wi-fi connection for about an hour so that we could download some more episodes of ‘The Wire’ – we’re addicts, we know!

Once it became nice and dark we hitched a cab up the mountain and quickly realized we were out about 12 euros as there was no magic happening that night. We had failed to properly educate ourselves and quickly discovered that the fountain only does its show Thurs-Sun and seeing as it was Monday night we were outta luck….this is our sad face/pose – 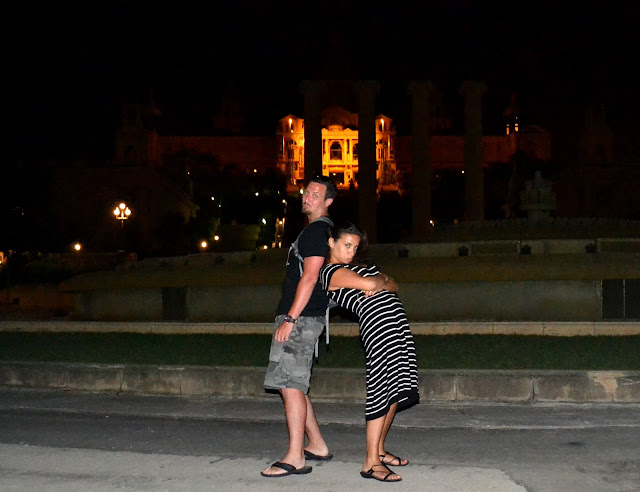 However, thanks to YouTube, here is what we would have seen and recorded for all of you to watch had we been there on the right night!

If you’ve made it this far through the post, thank you for reading such a long one – we’ll try to post more frequently so that the posts are shorter and easier to read!