After taking it easy on Monday, we were revitalized enough to take in some more famous sights. We started our morning by heading to the Louvre again, but the second time proved as unlucky as the first…it’s closed on Tuesdays.

We quickly re-routed our itinerary for the day and headed to the Arc de Triomphe. It’s a really impressive structure, 50 meters in height, and we climbed all 284 steps to the very top of it. Well worth the burn in our bums and thighs for the 360 degree view of Paris. One stop into our tour and the museum pass was already paying off as we got to skip the somewhat sizable line and head right up. 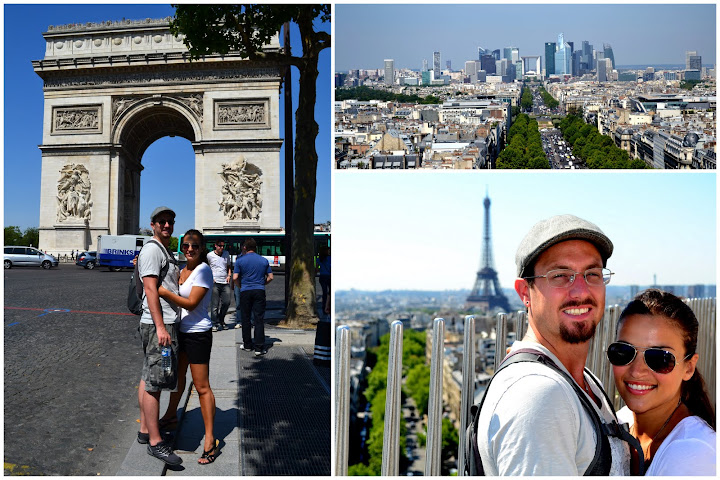 From there we strolled down the Champs Elysees which had lots of great shopping along it and then we veered off to see the Grand and Petit Palais. In our humble opinion the Petit Palais is much more grand-looking than the Grand Palais. 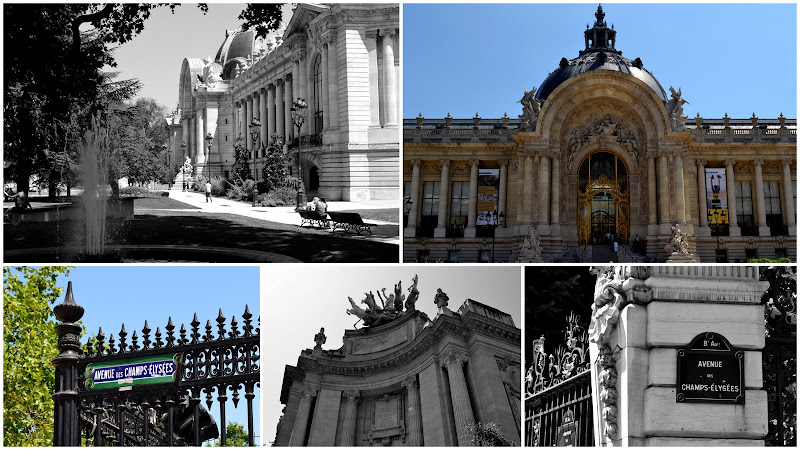 We had lunch at a great Asian restaurant around the Place de Vendome. That whole area is quite ritzy, so only window shopping was allowed! 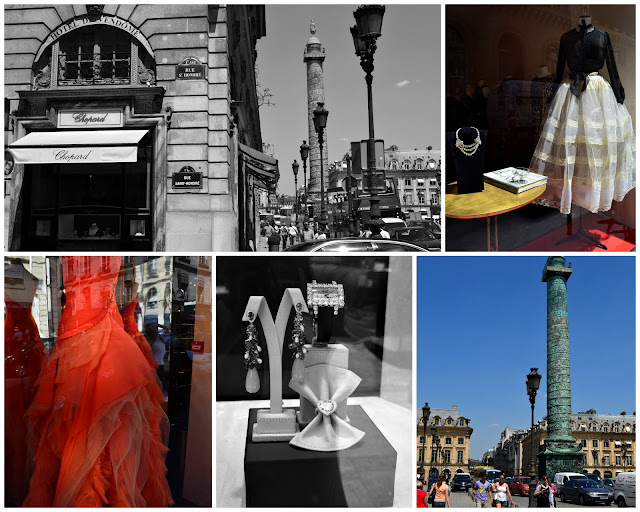 With our bellies filled, we headed to over to the Army Museum to see Napoleon’s Tomb. The museum was really interesting – we saw a retrospective short film about Charles de Gaulle and there were exhibits on all of the major wars that France participated in showcasing the uniforms, guns, swords, artillery machines, etc.  The highlight was the Charles de Gaulle piece – after hearing of all his accolades it was no wonder he has an airport and couple streets named after him. 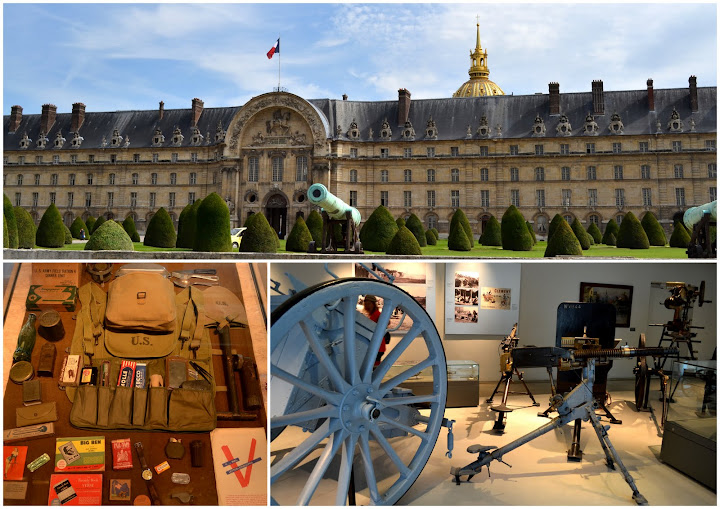 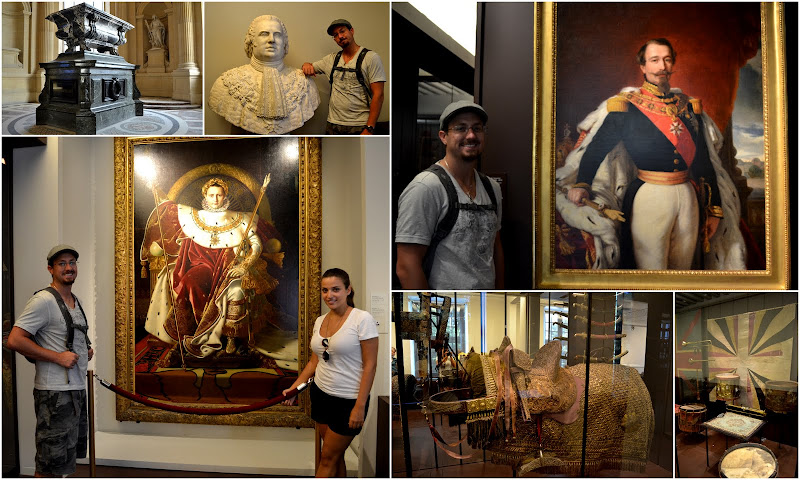 To finish the day off, we raced over to see Notre Dame. Unfortunately, we got there too late to go up into the towers, but we did get to go inside. It’s beautiful from the outside, but not nearly as impressive from the inside compared to other churches we’ve seen so far. (Notre Dame is the top left photo in the collage below, the other photos are: top right – St.Germain L’Axerrois Church, bottom left: Hotel de Ville, and bottom right – Arc de Triomphe du Carrousel and Eiffel Tower) 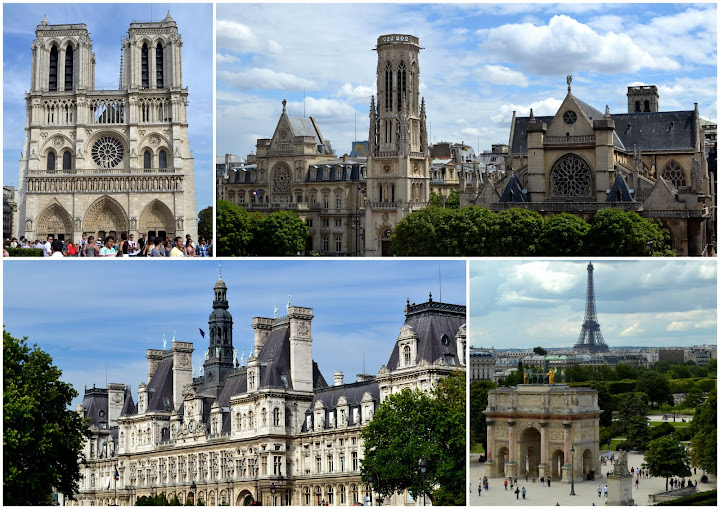 And here’s an artsy black and white version of a few of the same sights with a couple of others: 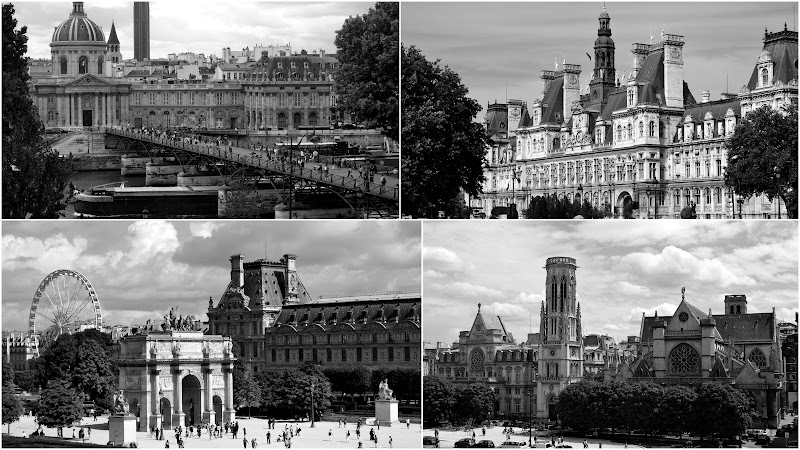 It was a jam-packed day and we were pretty proud of how much we were able to cover in one day!