We’ve been looking forward to visiting Prague based on all of the rave reviews we heard from friends and family that have been there before us. It’s one of the oldest cities in Europe and was relatively untouched during the war, so a lot of the original architecture is still intact, making it a very beautiful and interesting city to explore.

The first thing you notice is how picturesque it is. Many of the buildings are sorbet colored – peach, pistachio, whatever flavor light blue would be, etc. A river runs through separating the two sides of the town and there are several arched bridges connecting them.  The city is built into a slight hill so looking around you see lots of terra-cotta colored roofs stacked one on top of another. They also favor cobble stone streets over paved ones, reinforcing the old-world feel. 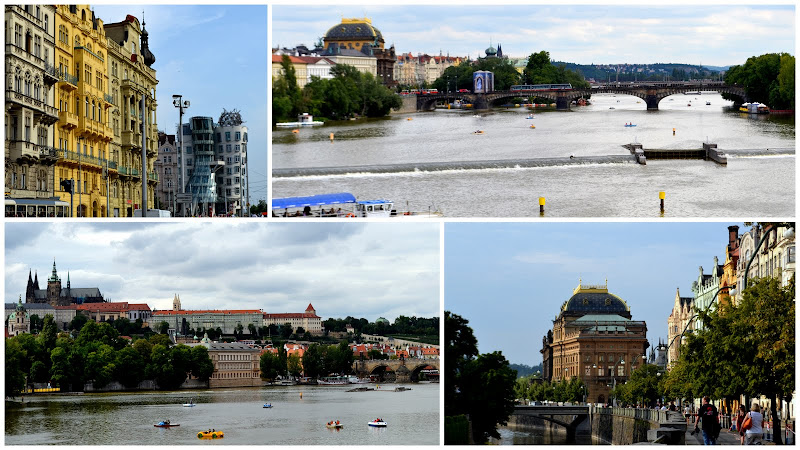 We took a walking tour, led by a gregarious Irish tour guide, who told us all sorts of neat facts about the city. For example, the reason that Prague made it through the war pretty much unscathed was because Hitler had plans to retire to Prague after the war, so while it obviously came under their occupation, the Nazis didn’t keep too many important things in Prague, hence the allied forces had little reason to bomb it.

Walking around Prague, you notice that there are so many different types of architecture – Renaissance, Baroque, Gothic, etc. The reason for that is because Prague was twice the capital of the Holy Roman Empire, so all of the great artists and architects did their most extravagant work there.

Prague also has more churches than we’ve seen anywhere else, so you’d think that they’d be a very religious population, but according to our tour guide they are the second most atheistic people’s (behind Estonia). The churches are now mostly used to hold concerts because they have really good acoustics and a several have been turned into souvenir shops and even hotels!

We also found out that we have much to thank the Czech for as they invented contacts, plastic explosives, and the propellor engine to name a few. Both of us being visually-impaired are particularly grateful for whoever invented the contacts – thanks!

The old center square is unsurprisingly packed with tourists. The first night  we ventured there was especially lively as the 2011 Bohemia Jazz Fest was playing. The astronomical clock a big draw and always had a huge crowd in front of it as people tried to decipher how it worked. There are also stands lining the square that serve traditional Czech street food -pork smoked and slow cooked on a spick, potatoes with cabbage, spiral sweet bread, and of course, beer! 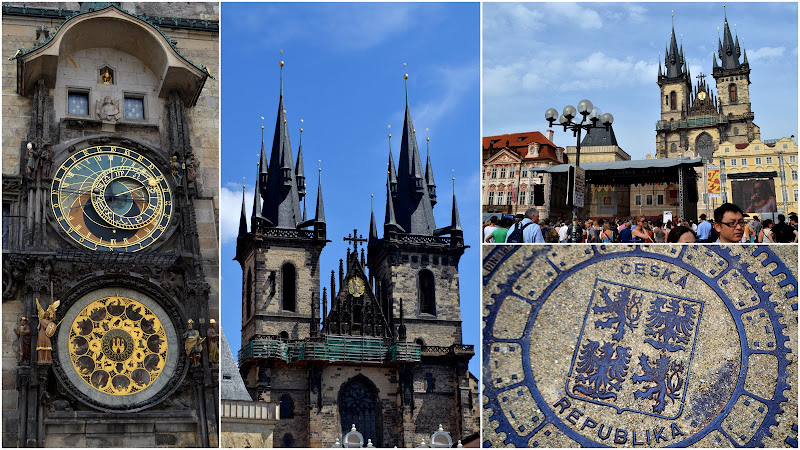 Another must-see was the Charles Bridge which was built in the 14th century and is still standing despite multiple floods and fires. There are many old statues lining the bridge and one in particular is popular for people to rub for good luck. It gets rubbed so much that two spots are shiny bronze while the rest of the statue is a tarnished bronze. In addition to the statues that line the top of the bridge, there is a slew of artists and musicians that set up shop along the way. All the action made for a very interesting stroll as we checked out paintings, jewelry, artists drawing portraits, and of course lots of tourists taking photos (clearly, we were guilty of that as well!). 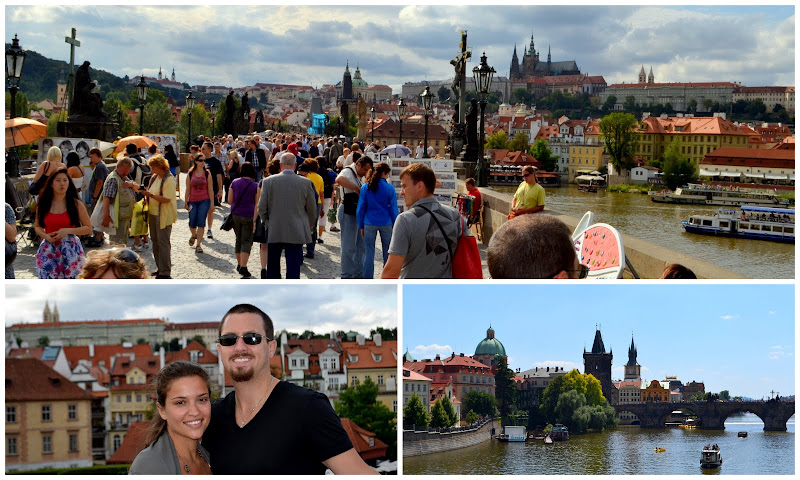 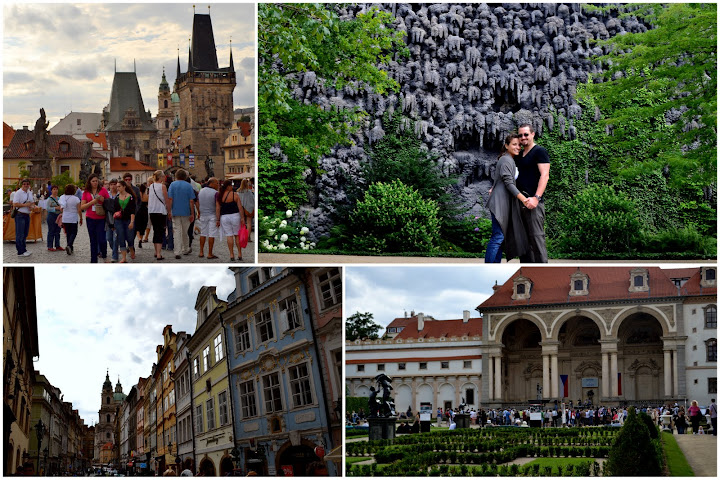 You can see the Prague Castle, perched atop a hill, from many vantage points in the city, but it’s especially picturesque as you cross the Charles Bridge and see it with the town below, sitting along the river. The Czech president resides in a portion of it and there are a series of courtyards which are home to old famous churches such as the St.Vitus and St.George Cathedrals. We thought the Sagrada Familia temple was taking it’s sweet time being built as it’s exceeding a hundred years, but St.Vitus took 600 years from start to finish!! 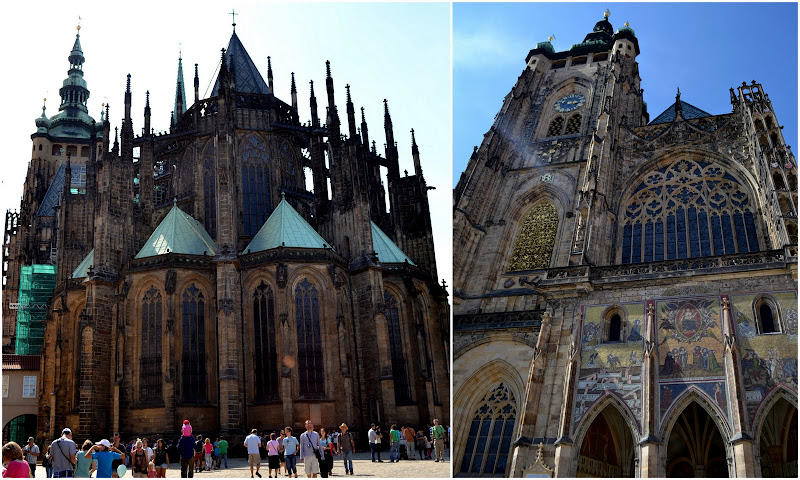 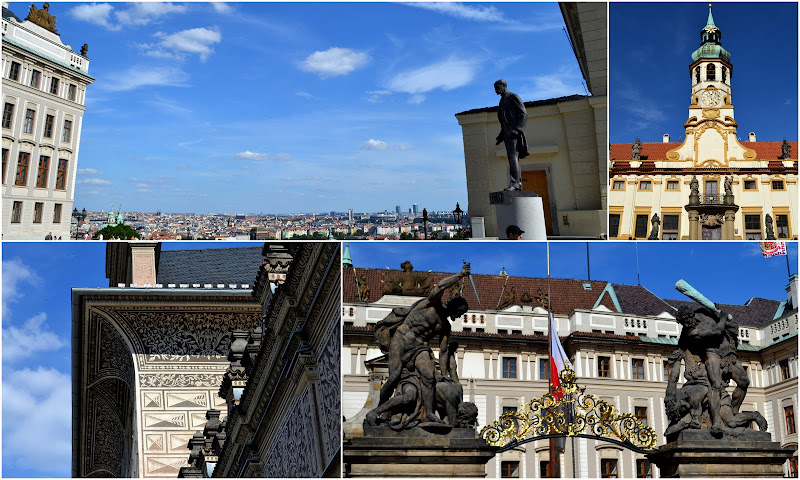 We hope that you can appreciate all of the city panorama’s we’ve posted so far because they require a lot of huffing and puffing, burning sensations in our thighs, quads, and butts, and full-body soreness the next day. To bring you the Prague city views from above we had to scale Petrin Hill, which is 318m (1043 feet),  to reach the Petrin Tower. We should have been tipped off by the long line of people at the bottom of the hill that were waiting to buy a tram ticket that took them up to the tower. But we scoffed at it, dismissed them as lazy, and proceeded to make our way up on foot. About two minutes later we were majorly regretting our bravado. The incline was STEEP, but we kept at it, knowing we could use the exercise, and slowly but surely we made our way to the top and reached the Petrin tower which looks like the Eiffel Tower’s smaller, less attractive cousin. It’s 60 meters in height and we climbed all  299 steps to reach the top. The view was beautiful as expected and worth the shaky legs! 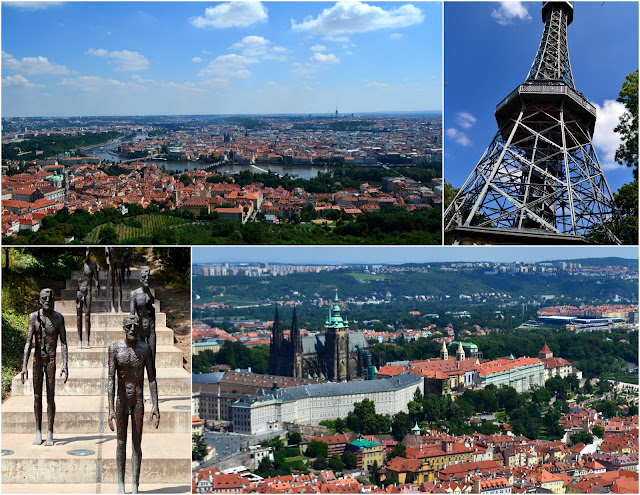 And last but not least, the food and beer! We thought that Belgium or Germany would boast the most beer drinkers, but we were wrong, the Czechs out-beer drink them! The beers were delicious everywhere and we even visited a monastery that has a brewery, which won best beer a few times. The food was very hearty – think meat, sausage, potaoes, stews, and lots of bread! They love to eat al fresco, so we dined/drank in biergartens along the canal and pretty much every restaurant had outside seating as well. 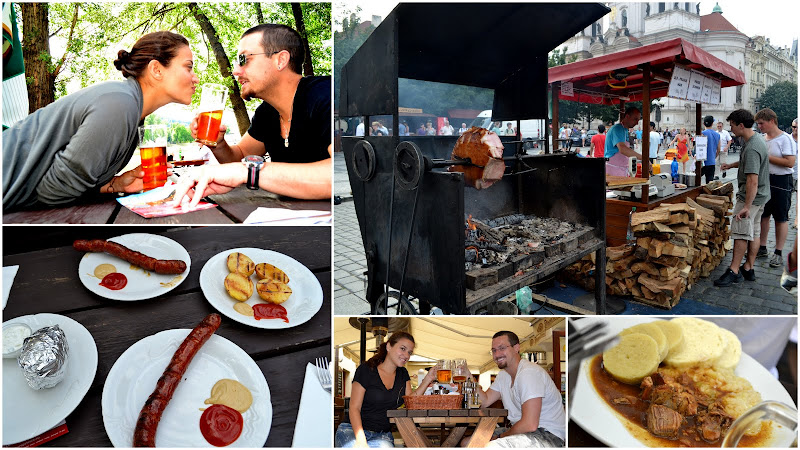 Our last night in Prague, we had dinner at a fantastic Italian restaurant that was housed on a ship docked in the canal. As we were waiting for a table, we noticed a guy riding his bike on the ledge of the bridge above us. It was totally crazy! He could have fallen into the water at any second, but he made it all the way across. Well, thanks for reading yet another long post! We miss everyone tons and tons!! 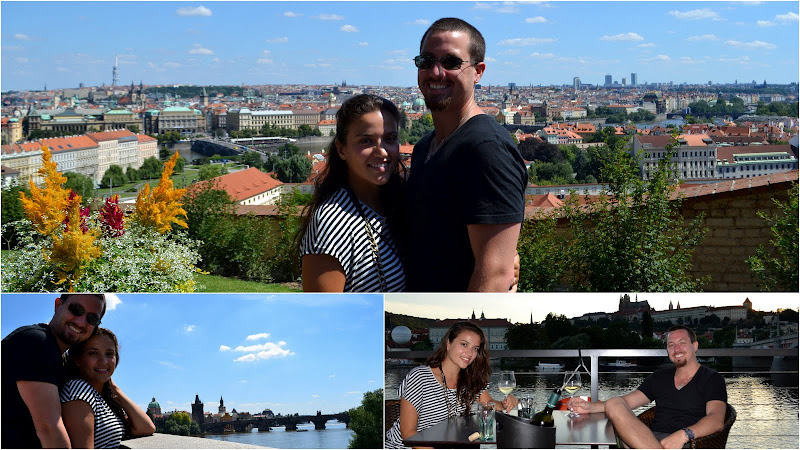