While our day started rolling out of bed late, getting some breakfast and checking some periodicals, Andrey drove 500km from Kharkov to Kiev at the crack of dawn just to pick us up. He then drove another 500km to deliver us to Odessa. The drive went by quickly and seeing the Ukraininan countryside was a real treat. We thought we’d seen a lot of sunflower fields when we drove through Spain, but it is nothing compared to the vast amount of acres upon acres of sunflower’s that we saw throughout Ukraine.

When we expressed an interest in the sunflowers, Andrey simply pulled over onto the shoulder of the highway so that we could get a closer look at them and  showed us that if you fold back the center you can see the seeds. The raw seeds taste like moist, soft sunflower seeds – they’re definitely better tasting once dried and crunchy! We also stopped by a corn field and tried baby corn, which you can eat raw (it’s sweet and crunchy), unlike full grown corn which you should cook before eating.

Andrey grew up in Odessa and  has a fierce love for his hometown! We were only there for two nights, but he was an amazing tour guide and we felt really fortunate that we got to see the city through his eyes. We stayed at the Kapri hotel, which is located in a ‘suburb’ of Odessa, in a large gated community of really nice homes situated along the coast of the Black Sea.

We were pretty hungry from the drive, so we had dinner at a local restaurant that was perched atop a hill overlooking the water. The weather was perfect and the view was so refreshing! The food was fantastic as well – we had fish that was freshly caught and fried whole. It was a small fish with soft bones so you can eat the entire thing except for the head. Andrey ate 98% of his, Valerie 94% and Chris was guilted into going from 65% to 80% when Andrey jokingly pointed out he was leaving the best parts behind. Even Chris will now admit a fried fish tail is a tasty treat. Alongside the fish we had delicious Greek salad and roasted vegetable sautee – the produce tasted bright and fresh, nothing compares to in-season and straight from the farm!!

After taking an early evening nap, we ventured out on the town and took a stroll through Arkadia, which is a long street/boardwalk along the water that is lined with restaurants, bars, and mega-discos. We also took a night tour through the old center. The architecture is very Italian and French influenced, so a lot of the buildings have very ornate moldings and everything was light up beautifully!

First on our to-do list the next day was to check out the beach. The water was a bit on the chilly side, but you got used to it quickly and it was also not nearly as salty as a lot of other sea’s are, which was a pleasant surprise. It was great to rest a bit, enjoy the sun and the sounds of waves crashing, not to mention a little fun on the water with jet-skiing! 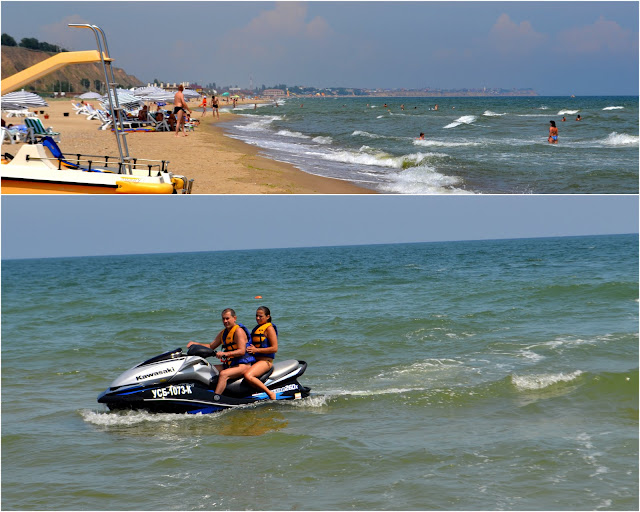 The beach we went to was about 30 km outside of Odessa in the countryside and on the way back we passed a lot of stands on the road selling fresh fruit. We had never seen melon fields, so we pulled over to a melon stand and the farmer’s son was kind enough to lead us through their field so that we could see how they’re grown. About what felt like a mile later, which Val trekked in her wedge heels and cute dress through dry, dusty black soil fields, we finally caught sight of a baby melon! Well worth it considering the melon was succulent, juicy, and downright delicious…plus we get to say our city-dwelling selves have now walked through sunflower fields, corn fields, and melon fields! 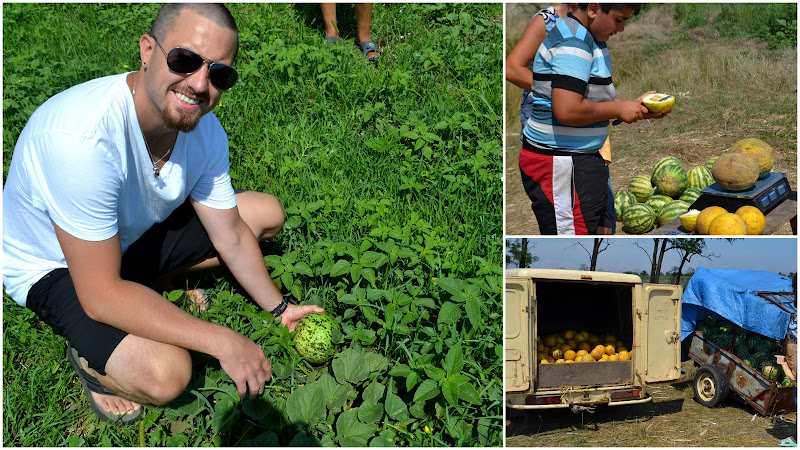 Later in the afternoon, we drove around town a bit and Andrey took us to a park that is now home to a lot of old military vehicles including tanks, submarines, and missiles – pretty cool!! 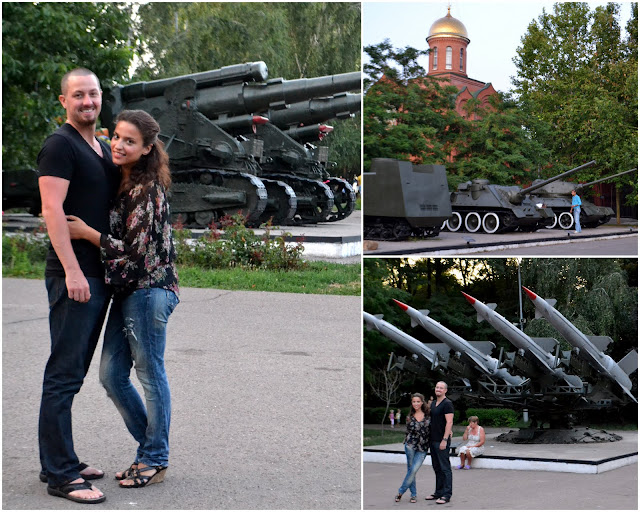 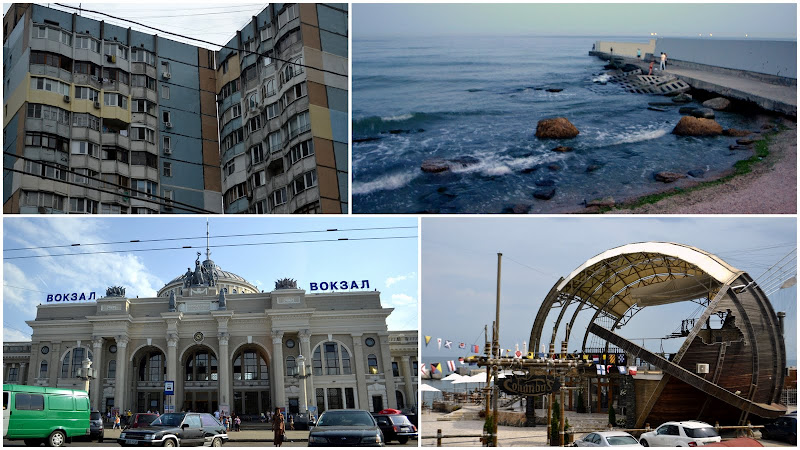 The next day, we went back to see the old city center in the day time. The Opera House is the gorgeous centerpiece: 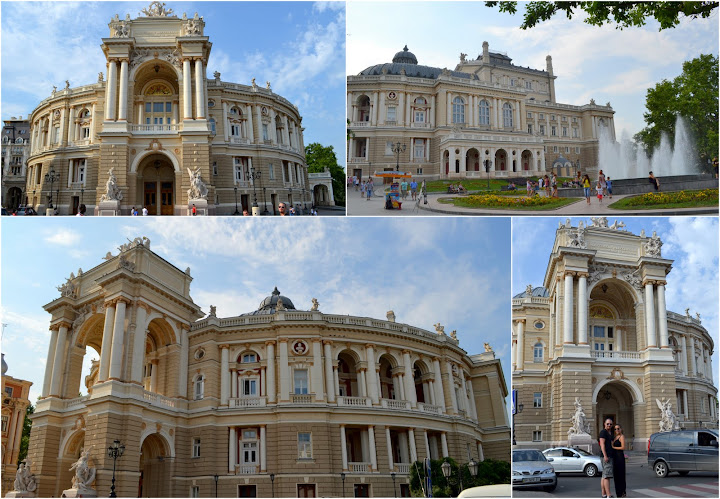 Many of the buildings are undergoing renovation, so while some of them look brand-spankin’ new (not modern, still in the old style, just clean), others are in more need of some TLC, but it makes for a cool dichotomy to see remnants of the past. 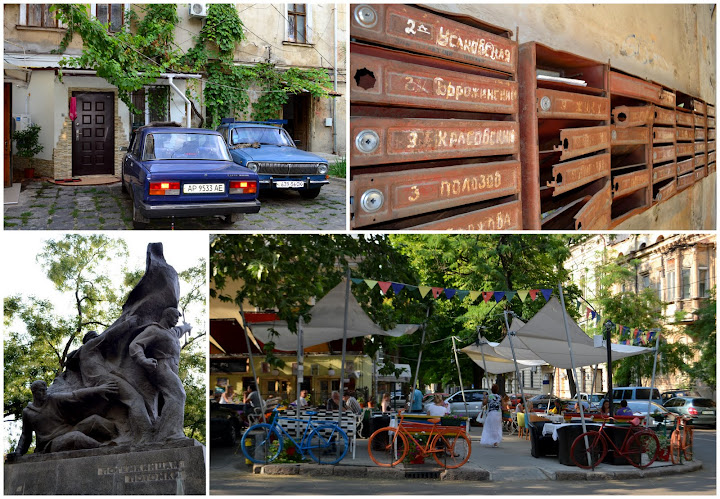 There is also a bridge (forgot the name) overlooking the port. Andrey pointed out that it sways, which is not a fun thing to learn when you’re halfway across it. It also didn’t help that there was a group of teenagers in the middle that were jumping up and down to make it sway and bend even more! What was cool about it though, was that people had fastened hundreds of locks to the rails to mark their love! 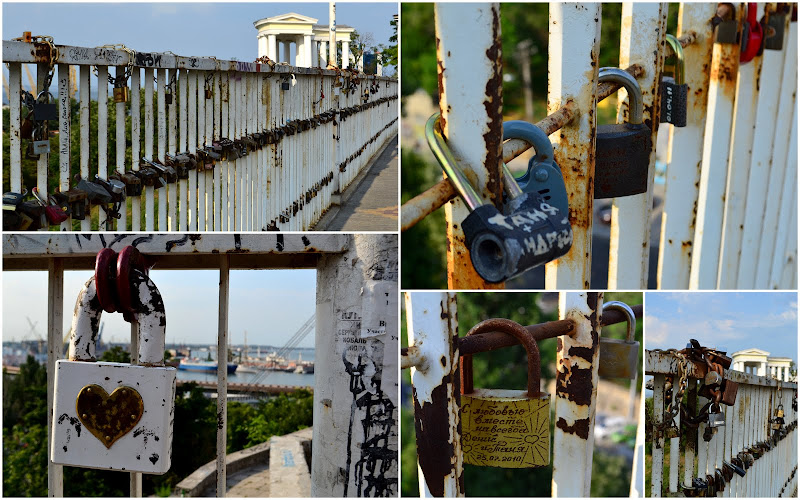 Before we hit the road for our long drive back to Kharkov we stopped to eat lunch – Chinese food! Who would have thunk it, but Chinese food in Ukraine was delicious! They don’t do egg rolls though ;( At the last moment, we were also invited by Andrey’s friend’s to stop by their house for a quick drink. They live in a beautiful mansion right along the water. We were definitely surprised to learn that luxury real estate costs so much – some of the really well to do areas that we drove through, the houses go for millions of dollars!!

Since we stopped at his friends beachouse, we started the drive back later than planned and didn’t make it to Kharkov till close to 4 in the morning! Poor Andrey drove for 8 hours straight! The lengthy journey is not due to distance but rather the road conditions. The roads are paved so badly that it’s not possible to go anywhere close to the speed limit, so it ends up taking about twice the time! Cruise controls is not an option on this stretch of highway. The best part was when we stopped at a trucker stop about midway through for a late bite to eat. The trucker stop is serviced by a bunch of local woman who sell their homecooked food. Each woman has her own picnic table where she displays her food and you just go around and select whatever looks appetizing. Everything is traditional Ukrainian food and it was absolutely delicious! If you can get past the locale (poorly lit, cats afoot, some flies), the food is by far worth it and it’s totally a place where we could see Anthony Bourdain or Andrew Zimmerman having a field day!

All in all, Odessa is a beautiful city and has a lot to offer – we would definitley recommend it if you happen to find yourself in that part of the world!!