After a very long and bumpy drive, we arrived in Kharkov around 4 or 5 am in the morning. Tanya and Andrey too kindly gave us their bedroom to sleep in and we zonked out immediately. We woke up to a delicious brunch of fresh veggies with a cheesy, garlicky, mayo spread, blinchiki with ground meat, and pork sauteed with potatoes and onions – Tanya is a great cook! They have a gorgeous apartment right in the center if the city and after we spent a few hours catching up on travel research and bookings for the week ahead, we ventured out to see the center before heading to dinner.

The apartment is located a few blocks from the main university and a huge square which is apparently the largest open square in all of Europe and a few years back the band Queen chose Kharkov, especially for that reason, as the location for their concert. A lot of people have asked us if we experienced any culture shock being in Ukraine. We cant say we did. Kharkov is a lot like most other mid-size cities. It has pretty much everything you can think of in terms of stores, banks, restaurants, etc. The infrastructure is a mix of older brownstone-esque 5 story buildings and highrise concrete apartment buildings, in addition to large parks and public squares with monuments and fountains. 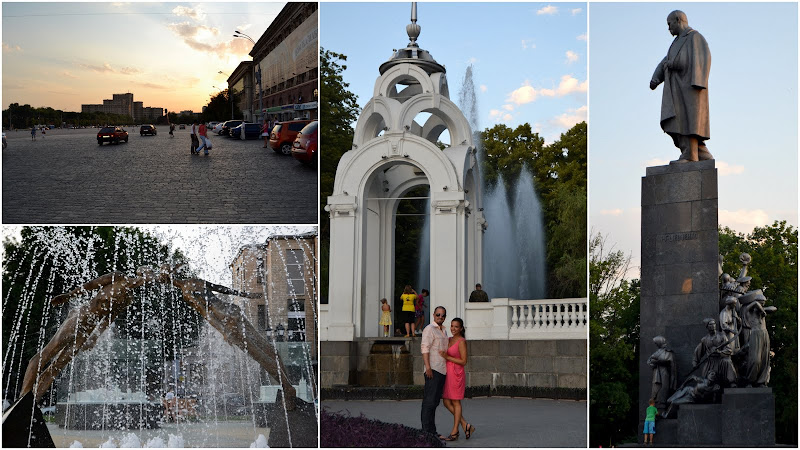 On the way to dinner, we ran into Tanya’s friends, Igor and Nelly, and they joined us for dinner. We ate a Georgian restaurant that was located in a small park and had a hip, modern outdoor seating area. We ordered chebureki, which are fried dough pockets with delicious seasoned meat inside – sort of like large empanadas, but the dough is thinner and lighter. We also drank a lot of champagne! On top of the bottle that Tanya and Val finished over brunch, they went through another two bottles during dinner. Chris stuck to beer and whiskey, but Igor kept ribbing him that he wasn’t drinking enough 😉

After a couple of hours of food, drinks and lively conversation, Igor suggested that we go across the street to get a pizza. Seeing as we had literally just finished eating a huge meal this felt a little over the top and so we tried to resist, but since he had forgone the pizza to join us for dinner and was now insisting that he wouldnt go home without his “super” pizza, we succumbed. Figuring we could grab drinks anywhere to continue the fun we all agreed to head across the street to the pizza joint. 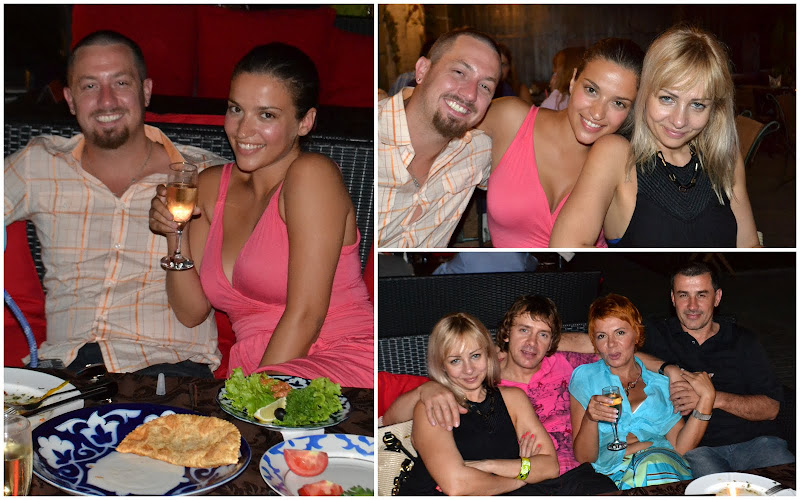 The thing that strikes you about this restaurant is that the courtyard is decorated such that it looks like the town square of a small German village, not an Italian piazza. If you go back to our post on Bochum look for the picture of the buildings with the classic white walls and brown beems and imagine us sitting in an outdoor square in between a series of them. Essentially nothing about the place said Pizza. We ordered another bottle of champagne, a couple whiskeys and Igor ordered his pizza. Long story short, the pizza arrived, Igor insisted we try it, and we found it was more than “super”. The secret was the use of crumbled blue cheese to compliment the medley of vegetables. It was no wonder Igor refused to go home without it.

The next day started off with a couple of mild hangovers. Chris was a trooper though and still knocked back a couple shots of tequila over lunch with Andrey. In the afternoon, Tanya took us to try to find the house that Val grew up in. We drove to the train station, called a levada, and started exploring. We knew that the house had been located behind it, so we started walking down a dirt road that ran around the train station to get to the back of it. It was a little seedy to say the least. Imagine stray dogs, garbage bins that are being rifled through by old women, and men sitting on crates drinking and playing cards. We kept walking and passed scrap yards and a factory or two. Not seeing the house along the main road, we ventured down an overgrown path and came upon an old brick house in ruins. Val was only 5 years old when they moved, so her memory of the house is limited, but she was pretty sure this was the house. She remembered that it sat sideways, with the porch jutting out to the side inside of straight at you and that there were fruit trees planted along the fence. Sure enough the house we saw fit that description and we showed the photos to Val’s mom and she confirmed this was in fact the house! It’s sad that the house is in such ruins now and that we couldn’t go inside, but it’s a small miracle that it’s still standing after 20+ years and we’re so glad that we were able to find it. 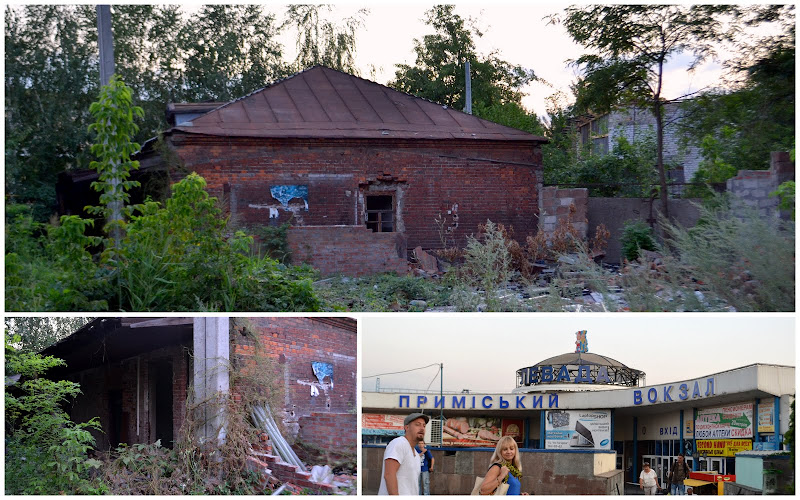 Afterwards, we headed to dinner with Igor and Nelly again. This time at a Chinese restaurant. It was BYOB, so we picked up some wine and Jameson along the way. We never thought we’d be eating Chinese food in Ukraine, but it was delicious! A little different than the Chinese food we have at home, their’s is heavier on the sauce, but it was obviously tasty if Chris ate tofu and vegetables! Our flight was the next morning at 3 am, so we had to be home by 1 am to gather our things and head to the airport. This left us just enough time to grab a drink at a swanky rooftop lounge after dinner. The perfect way to end our last night in Ukraine!