As the last selfless act in a campaign to be the best hosts ever, Andrey and Tanya drove us to the airport at 1:00am in the morning to see us off to Milan. We really  cannot thank them enough for everything they did – it made seeing Ukraine one of the most memorable parts of the trip so far.

The best thing about arriving at the airport was that we actually had tickets for a flight that didnt take off a couple days back. That being said, there is always something to “experience” on every leg of the journey since giving up Bitsy. The experience that day was waiting – first to get our boarding cards, then to go through border partrol and lastly in the chaotic line to board the plane. From Kharkov, we had a layover in Istanbul – for six hours! Luckily when we arrrived in Istanbul at 5:30 am, the cafe’s were open and they had small couches as seating, which we used to make ourselves as comfortable as possible so that we could catch up on some sleep before our next flight to Milan.

There is not much to say about Milan because we were so tired from Ukraine that we bunkered into our Best Western and rested for a couple days. There was an occassional foray into the streets to get some food or use the internet but nothing special to write about. Chris tried his first of many pizzas from the motherland of pizza, but it left him wishing he was still back hanging with Igor in Kharkov. From what we did experience in the area surrounding the train station, you could cleary see that Milan is a business city with many modern commercial buildings on the main streets, offices above stores, and restaurants on the ground level. Shooting off the main strip like arteries, was a series of residential streets with smaller shops and groceries scattered about.

With a connecting train via Florence, we arrived on day 3 of the Italian tour in Venice. If there is a city we have seen thus far on our trip, which immediately leaves an impression, it is Venice. You step out of the train station into a picturesque scene: a canal at your footsteps, filled with gondolas, a domed church and a series of Italian-looking buildings molding the skyline and a centuries old arched bridge filled with people. 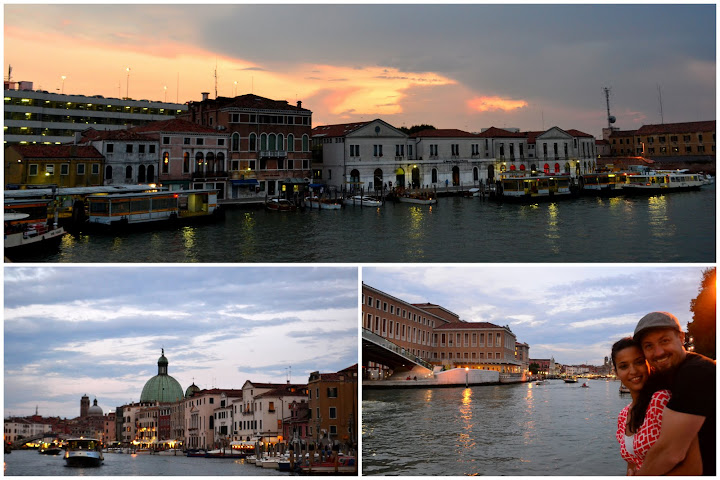 The train station is on the north side of the city and our hotel (Hotel Principe) was located less than a hundred meters down the main street. It has a nice patio out back which sat on the Grand Canal. The best part about the hotel is that the key, a standard metal key, was attached to a key chain bell weighing at least 3 pounds. Won’t lose that in your pocket unless it pulls down your shorts.

On our first night in Venice we simply explored the streets on the northern side of town. It is an experience to see a city built on the water. The many small bridges and constant passing of boats and gondolas gives it a unique character. 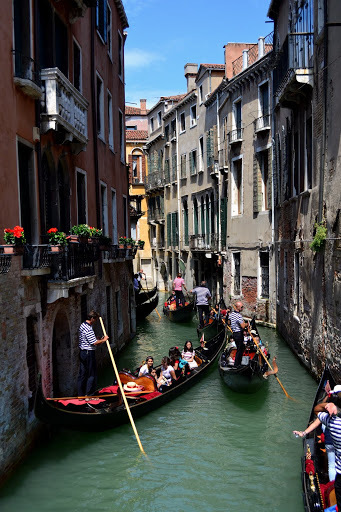 We spent the next couple days in Venice getting lost in the labrynth of streets. Maps are kinda useless so you just pick a direction and go until you hit a landmark you recognize or return to the ant trail of people walking between Saint Marks Square and the train station. 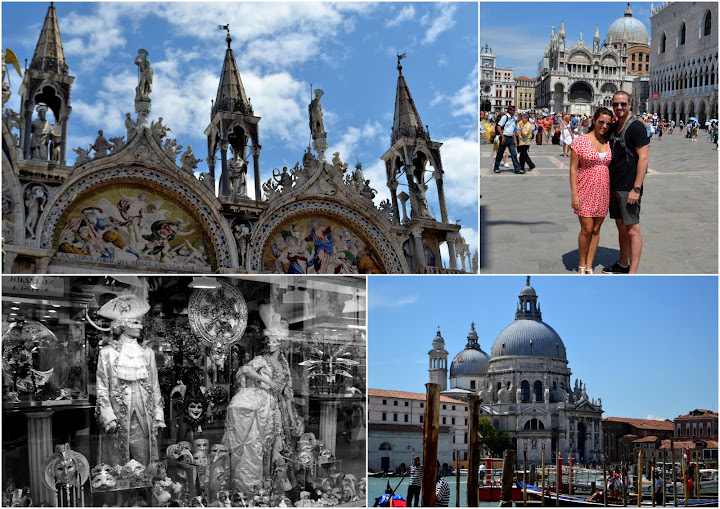 The entire economy in Venice appears to be made from tourists which means there are thousands of shops selling all sorts of crafts. That being said, it is easily one of the most expensive cities to which we have traveled, so our money stayed in its pockets. No Murano glass gifts for the fam, we will make it up to you later. We didn’t even take a gondola ride. At one hundred euros, it felt like the equivalent of riding a horse drawn carriage through Central Park, which we long felt was the worst tourist trap in NYC, so we skipped that adventure.

We likely had booked one too many nights in Venice, you only really need one good day to walk the town and drink in its culture. For us this meant we were excited to get back on the road to travel to Cinque Terre. Friends had raved about its beauty and we had long been waiting for some beach time, so we happily parted ways with Venice and hopped a train heading towards the other side of Italy.

We chose to stay in the village of Monterosso, in a quant little B&B up on the mountain, outside of the town center. The B&B was named Monterosso Alto and it had a fabulous restaurant, a convenient shuttle into town and a friendly staff. Highly recommend it if you decide Monterosso is for you.

Cinque Terre is a collection of five towns nestled into the coastal mountains and valleys. It is known for its adventure hiking and quaint beach towns. Monterosso was at one end of the chain and had more beach real estate than we we saw of the others. Our strategy was beach by day and hiking in either the morning or evening to avoid the hot August sun. Seeing as morning is a creature we (read Val) seldom get to meet, our first adventure was down to the beach. 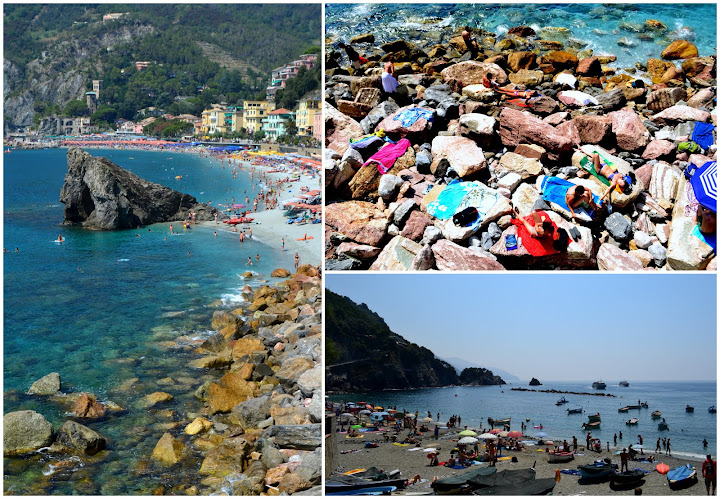 The umbrella rentals were a little on the pricey side, but the crystal clear water makes up for it. The black sand rocky beach can get quite hot and the water is mildly chilly but is ultimately a refreshing feeling on your skin. The rocks are actually a little annoying since our American feet don’t have the proper grit to walk on them comfortably.

In the evening on day one, we set out to conquer a hike down to a famous viewing point. The hotel staff advised us that the trail was just 50 meters down the road to the right, sounded simple enough. A couple of dead-ends later, we aborted finding the trail and opted instead to simple follow the road back into town – about 4km. It traverses the cliffs and had the advantage of a shuttle service back to the hotel. In the daylight the next day we learned that that elusive trail we could not seem to find the night before literally ran directly through the parking lot of our B&B. 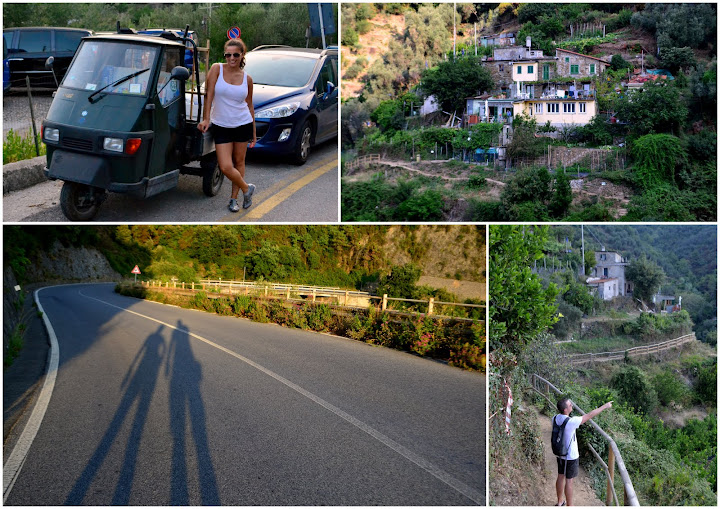 Day two started bright and early. We hitched a ride to the trail which connects the five towns and follows the coast for some terrific views. Once again, we found ourselves looking for the trail entrance until a nice couple wandered along and pointed us in the right direction. We would have never gone the way they told us to from where we were wandering around, as it was the smallest little path and not marked at all. Originally the plan was to walk the span of all five towns, but after about 15 minutes on the trail, that was quickly revised to walk to the next town and see the rest by train. While the guide may claim these to be “easy” trails, as in you dont have to climb up or over stuff, they are in no way flat terrain. 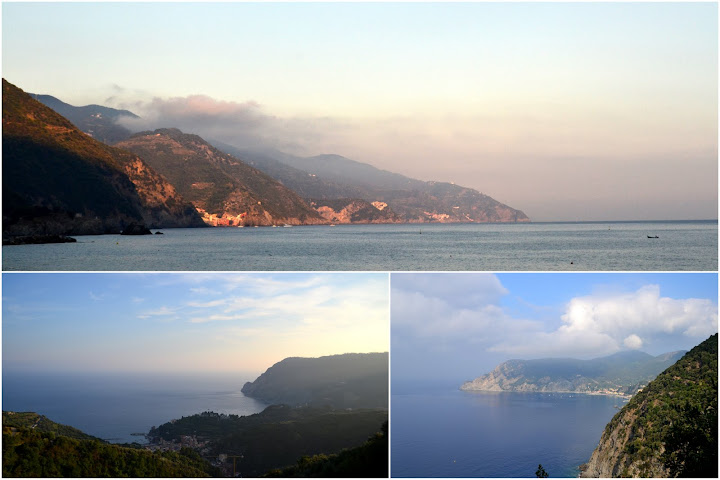 From Monterosso it was likely 300m up (we skipped the first 500m) and then 800m down to Vernazza, the adjacent town. It was an hour and a half of fun exercise and we got some great shots, but there was no need to push it. Besides you have to pay to walk the trails during the day so we avoided that. 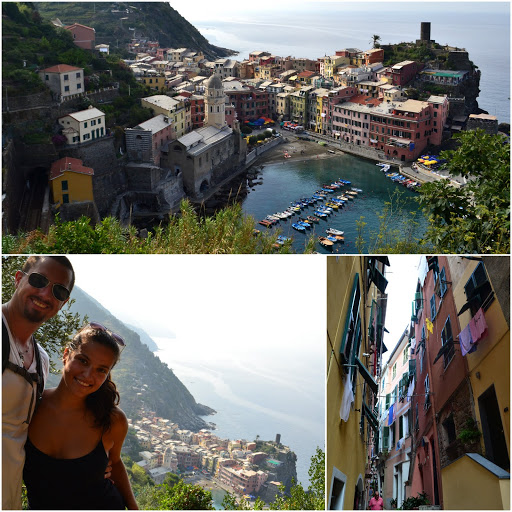 To end the adventure, we never quite made it to the other three towns as Chris read the departure sign incorrectly and we lost an hour, which was a sign for us to retreat to the beach. We later learned, from a couple of guys we met in Rome that had also come from Cinque Terre, that the Monterosso to Vernazza hike is the longest and hardest of the five towns, so we would have had an easier time hiking to the rest of the towns had we continued…good to know for next time! We capped off the day with a couple glasses of some of the best prosecco we’ve ever had at a bar along the shoreline in town while we waited for our shuttle back to the B&B. Cinque Terre is a gorgeous place and we could have easily stayed there longer. There is so much to do and we definitely see ourselves returning there one day!