We were quite sad to leave Cinque Terre, she certainly captivated us with her beauty and charm! Next on our tour of Italy was Florence, but we had to transfer trains in Pisa, so we took the opportunity while we were there to check out the famed Leaning Tower. The train stations make it quite easy for you to make pit stops – they have left baggage stations where you can check your bags for a few euros so that you don’t have to drag your stuff along with you. The Leaning Tower is about a 20 minute walk from the central train station, so off we ventured! We quickly discovered that the tower is the only attraction worth seeing in Pisa, the city itself was a bit lackluster, but perhaps that’s because we were there on a Sunday when most things were closed.

As you get closer to the tower, the crowds increase and before you know it you’re surrounded by a bunch of people all taking the requisite ‘I’m holding up the tower with my hand/finger, hehe!’ pose…so obviously, we had to partake in the fun as well – Val chose the hand approach and Chris went with the finger 🙂 Next to the tower is a large duomo that is a beautiful architectural specimen, but it doesn’t attract nearly the attention that the tower does. The town of Pisa should really thank whoever built the tower crooked because otherwise few people would even know of it. Fun fact – they knew it was crooked after the fourth floor but continued the construction as planned. If you’re in the area and have a few hours to spare, definitely check it out, but it doesn’t warrant much more time than that. 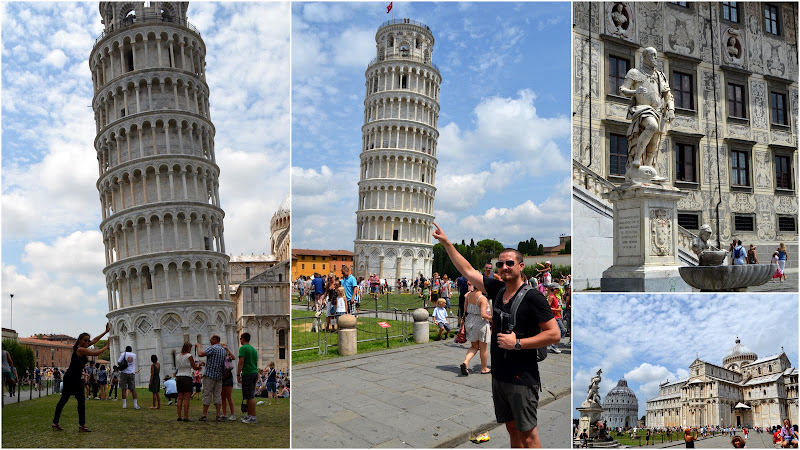 Finally we arrived in Florence and checked into the Grand Hotel Cavour, which turned out to be one of the nicer hotels that we’ve stayed in so far. We were impressed right off the bat with the elegant lobby and Val was beyond delighted to discover a king-sized canopy bed in our room. It also had an excellent location, right next to the Duomo and within walking distance to most of the popular tourist spots. Last but not least, it has a great roof top deck which is willing to serve you a glass of prosecco if you leave an arm, leg or first born child behind – go for the view but bring your own booze.

The duomo is truly a sight to behold. Even though its undergoing renovation, you can’t miss its grandeur and uniqueness as its accented heavily with green and pink marble. It needs the renovation as the outside was allowed to get a little grimy over the years. The square that its situated in is teeming with tourists at all times and the line to get inside is miles long! Needless to say, the reason we only have photos of the duomo from the outside is because we refused to spend a couple of hours in said line. 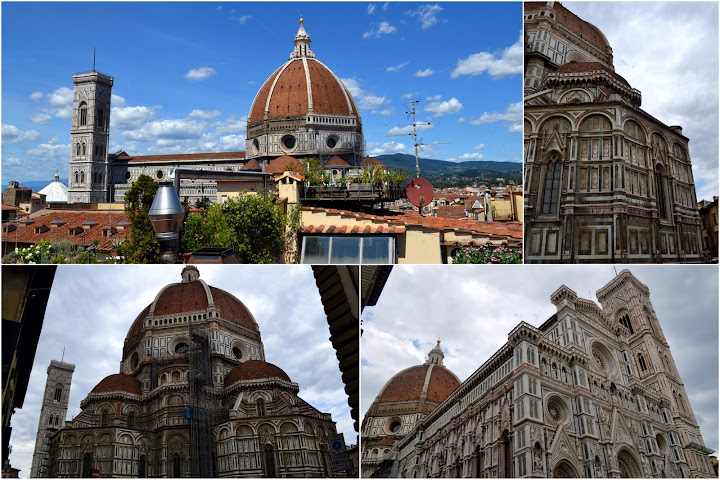 We took it easy on the museuming in Florence for the most part and just did a lot of walking and observing. There are lots of side streets and piazzas (squares), so we just explored and window shopped. Val wanted to see the Uffizzi Gallery, but unfortunately the line there was also exceedingly long. So instead, like the mature adults that we are, we made fun of the small male appendages on the sculptures and fountain that were located outside of the gallery. It is interesting to see how different regions and different eras were more or less accepting of full frontal statues. 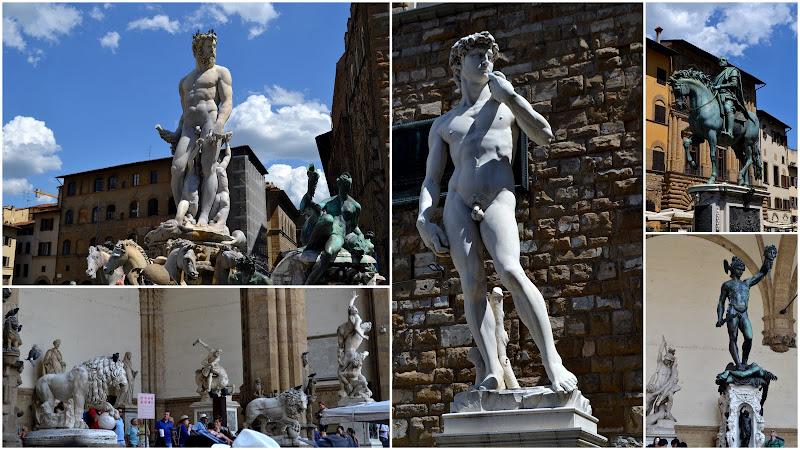 We also walked the Ponte Vecchio, which is surprisingly lined on both sides with high-end jewelry stores. Who knew that being on a bridge induced people to buy gold and diamonds? We didn’t buy anything, but we did take some beautiful photos – it was a gorgeous day with bright blue skies, fluffy clouds, and the Tuscan landscape in the background! 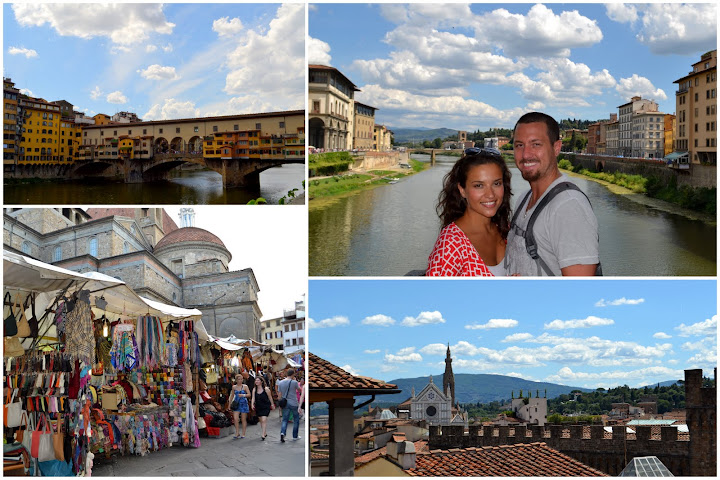 We also spent quite a bit of time in Florence hunting down the perfect leather jackets for Val’s mom and sisters. Florence is known for their leather goods and we scoured the San Lorenzo market and many other stores in the city for the best styles and value. The market is quite an experience! In addition to leather jackets, they also sell belts, handbags, scarves, wallets, clothes, various other trinkets and souvenirs, and t-shirts. Here are a few of Chris’ favorites 🙂 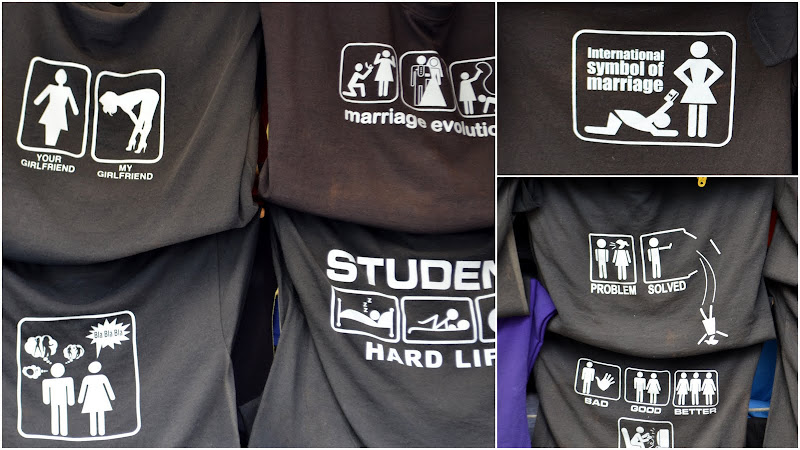 The leather jacket salespeople are some of the most aggressive we’ve ever encountered. If you even so much as glance sideways at one of their products, they will barage you with invitiations to check out their store. Once you enter their lair, watch out! Every jacket will be THE perfect style for you, every color will be THE perfect match for your stunning complexion, and you won’t find better quality or cheaper prices anywhere else in the world! One guy even heckled us every subsequent time we walked past his booth after not acknowledging his genius for what we wanted. Luckily we were able to find one vendor in the market that seemed genuinely well….genuine, so we bought one jacket from him and the other two we found at a store a few doors down from our hotel. We were happy we were able to get souvenirs that will last for several years, but for the most part, can’t say that we were terribly impressed with the variety of jackets available. Most of the vendors carry the same merchandise, which are knock-off’s of designer styles, so you’re mostly trying to discern who has the better quality for the price. We were hoping to see more originality, if we had, we’d have certainly bought more than just three jackets!

We wish we could have seen some of the other cities in Tuscany, such as Sienna and Chianti, but with only 2 days/3 nights in Florence, we just didn’t have the time. We’ll save that for another trip, at a later time!