A fast train, a slow train, a late train and an uncomfortable train; finally we were standing in Sorrento trying to figure out in which direction town was and how best to get there. Every train or bus station should have one of those maps they post in subway stations which provide the lay of the land to help you figure out your next step, but sadly they do not. The next step for us was to get to the far side of town to catch our shuttle to our hotel property. With no cabs in sight and relatively fresh legs underneath us, we decided to go by foot. This was the first semi-long walk we signed up for with full regalia, all 47 kg of it and the promising news is we didn’t die half way through it.

The resort we were staying at (Hotel Aminta) was about 10 mins outside the center of the city. The funny thing is that when we would tell locals what resort we were staying in, they acted as if we needed a sherpa and oxygen to get that high into the mountains. The resort was worth the price of the peculiar stares though as it was a pleasant mix of modern and rustic – Miami style lounge scene by the pool and olive & lemon tree groves on your stroll to the room.

The hotel receptionist who checked us in eluded to dinner being included in the rate similar to the breakfast. They called it the ‘half-board’ option which we had read about before but never truly understood what it entailed. We are guessing it is more common for British travelers as the resort was overrun with them. Since we assumed we had already paid for it, we decided why venture into town and had dinner at the hotel. It was a pre-fix menu with turkey (as in they cooked a whole bird) for the main course. This was a nice treat after so many days on the road, especially considering you don’t see that much of it served in restaurants in the states outside of the week surrounding Thanksgiving. Unfortunately, later we discovered that we were not staying half-board, thus making the meal cost about as much as if we had FedEx’d the turkey from the states. But knowledge is power and now we know what a half-board rate entails. 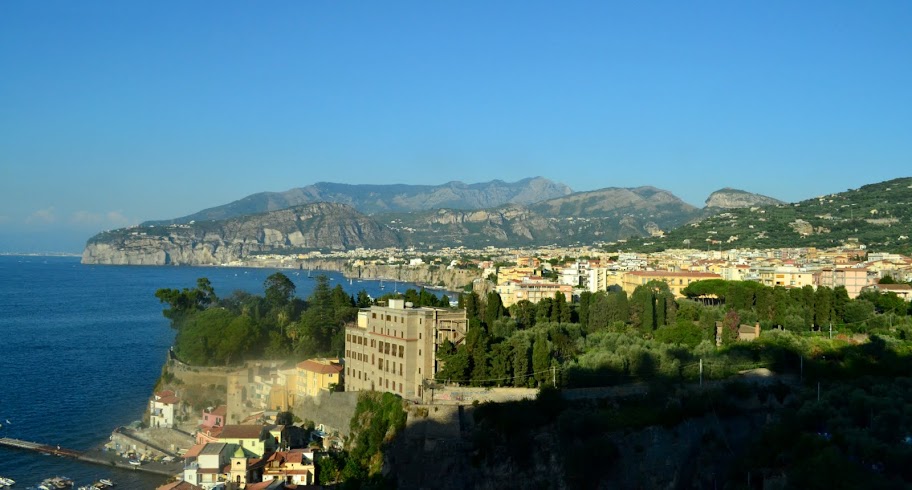 The town of Sorrento itself is fairly decent in size with a main strip lined with shops, restaurants and street performers (statue guy, spray paint guy equivalent to Bob Ross, etc) and from the main strip there are about 10 or so blocks of additional streets filled with a similar mix of attractions. The entire town sits on a cliff high above the sea level. To get down to the port at sea level you have to walk along the road and similar to most mountain towns there is no sidewalk. Inevitably, in the 15 minute journey down, there is always one “oh-shit” moment as a car zooms a little too close for comfort.

Shoe-making appears to be the niche craft of the town. There is a shoe makers shop on every street trying to peddle a variety of dainty female shoes and sandals of all kinds. Val was looking to replace some of her shoes which have perished along the way, but the quality did not match the outlandish price. The average sandal, soles with no cushioning, was priced at 35 euros. It felt like buying a pair of shoes was making a donation to the Save-ShoeMakerX-Foundation and each month thereafter the guy/gal should send you a newsletter with pictures so you could track their progress.

For anyone who makes it to Sorrento and is comfortable traversing the road down to the sea, we had a simple but tasty meal at 5 Di Leva Sisters restaurant, which as you can guess by the name is a family run establishment. It was recommended as a good spot for fish and it lived up to that calling. It also ensures a nice hike back up the hill to work off any desserts or in our case the 4 loafs of bread we consume per meal while in Europe. 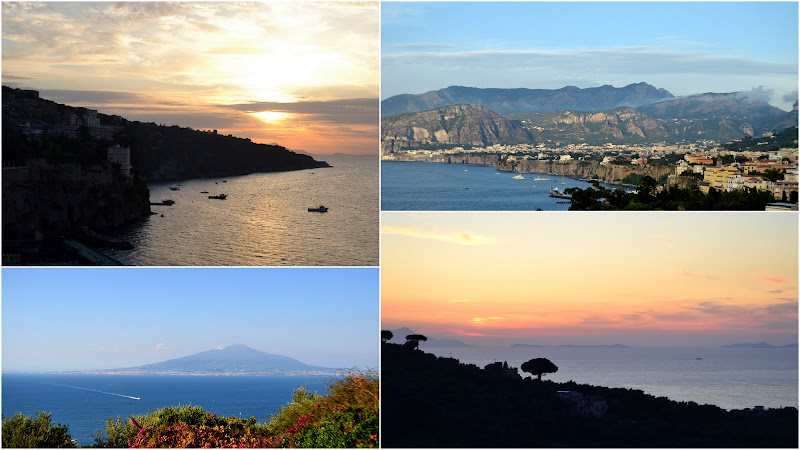 The real highlight of our stay in Sorrento was a day boat trip to the nearby isle of Capri. Known for its colorful waters, lagoons and grottoes, it is a hot spot for the mega rich and a must-see if you are anywhere close to it. It is easily in the top 5 of places we have experienced on the trip thus far.

On the boat we also met a great couple from the Chi-town area, Michael and Emily, who had just gotten engaged the day prior. The glowing bride-to-be would do the hand pose with admiring stare of her new bling every once and awhile, which made Val long for her rings back home. We spent the entire day hanging out with them, but unfortunately couldn’t do a night cap as they had to return to Naples that evening. We wish them the best of luck on their upcoming nuptials!

The captain of the boat was an eclectic guy named Andre who clearly loved his job and ran the business with the help of his two sons. He was a bit of a joker and kept the trip light and engaging. They say pictures are worth a thousand words so we will save you a lot of reading by giving you these collages instead…. 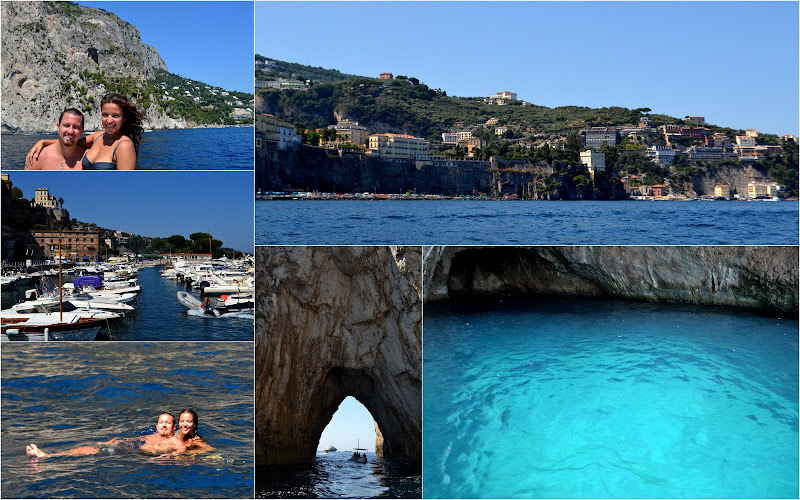 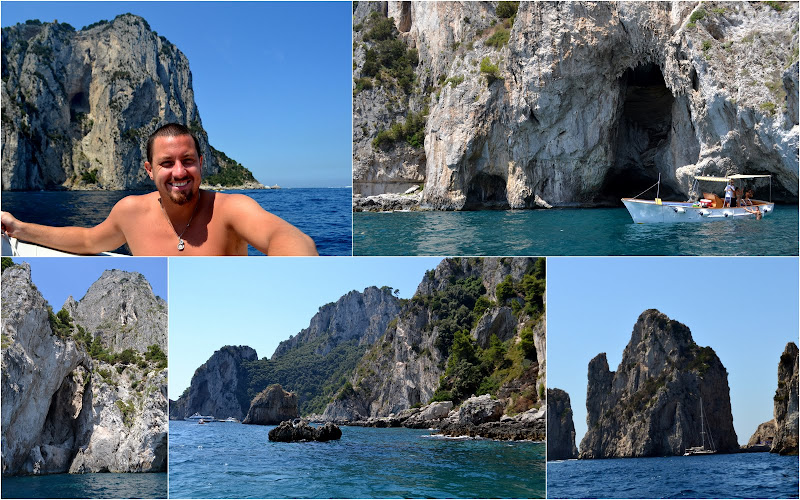 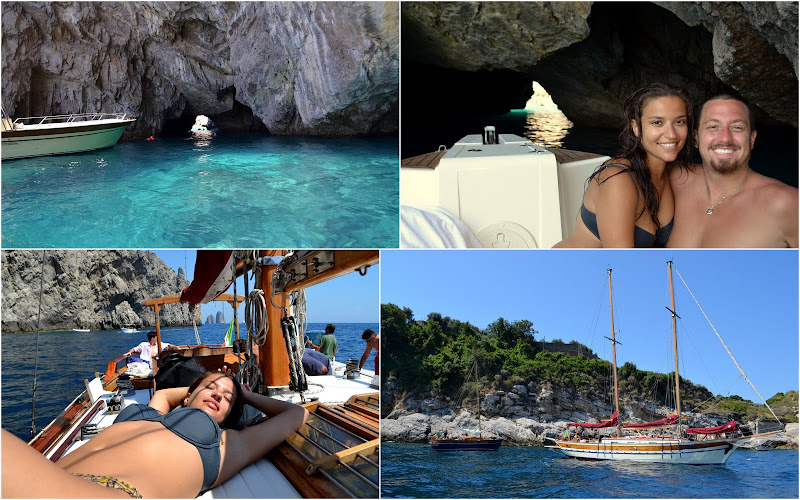 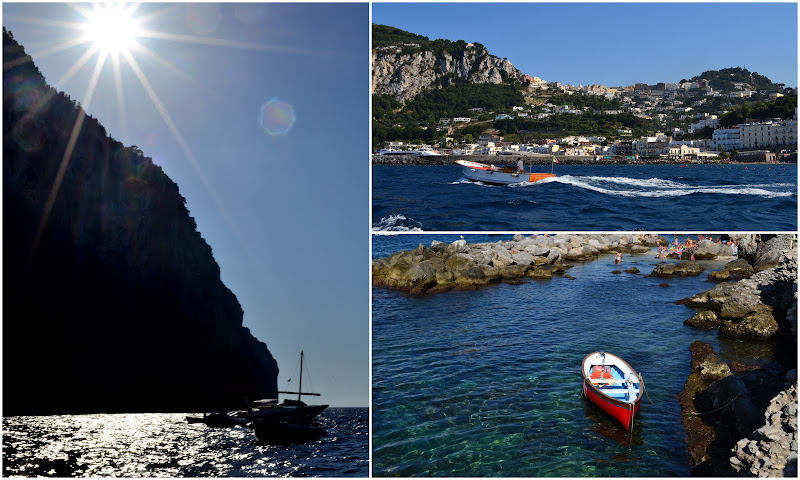 We had a beyond fabulous time and now have something to aspire to – returning to Capri one day, on something resembling this Russian oil barron’s ride, and being able to afford all of Capri’s luxuries!