Our time in Italy was coming to a close and we had a ferry reservation on August 18th from Bari, Italy to Greece. Bari is on the other side of Italy from where we were in Sorrento and the most direct train goes from Salerno, which is a town a few hours south of Sorrento just past the Amalfi coast. We had read numerous times that the best way to travel from Sorrento down the Amalfi Coast to Salerno was to take a bus which follows the very windy mountain road along the water and passes through all the great little villages such as Positano, Ravello, and Amalfi. So to mix business (getting to Bari) with pleasure (seeing the Amalfi Coast), we embarked on a two-day, transfer-filled adventure.

Our journey began on August 17th when we checked out of our hotel and reversed our route from a few days prior – hotel shuttle to the center of town, followed by a long walk to the bus station. Must say, we are starting to break in our pack-walk and once we finally jettison our lone rolly-bag, we will be lean mean traveling machines!

We should have a color system for our travel days. Green would be a day in which everything goes peachy and travel is a breeze. Red would be for the days in which we question why we are still on the road after 3 months. Then we could have a smattering of colors within that spectrum representing the typical things that make travel days fall in between those two categories, such as delays, cancellations, annoying people or unforeseen expenses. Under such as system the trip from Sorrento to Salerno would be a flaming RED day.

The catalyst to the fire was the system for buying tickets and queueing for buses in Sorrento. We bought our tickets from the newspaper vendor (yes, the newspaper vendor) and he explained in a very disinterested way that the line for the bus was down the hill to the right. For those of you who don’t know, Chris does not deal with ambiguity all that well. So down the hill to the right, when there are no signs or any other clues letting you know you are in the right spot does not sit well. On top of this, the bus was late by over an hour and mind you, it was HOTTT that day. Now, if you are thinking this depot has any form of shade to stand under while you wait in total confusion, you are incorrect. There is none and we were cooking in the scorching sun, just standing there sweating and roasting, growing more and more dehydrated. Buses kept arriving and leaving, with no markers as to where they are going, teasing you as they round the corner towards you, but ultimately a massive letdown when they roll right past you. So you’re simply left to stand in the makeshift line, hoping you picked the correct spot “down the hill” and “to the right” so that you are not watching your bus drive away without you.

To fuel the spark, which at this point is only just starting to catch the kindle and show sign of flame, there were people joining the line late and going to the front of the queue. While we concede that the line was rag tag at best, there is absolutely no way these groups of people, with there combined intelligence, cannot tell which end is the front or back of the line. At this point Val was thinking unpleasant thoughts about how rude they were and Chris was trying to devise a way to bump them into oncoming traffic. Alas the bus finally arrived and we pushed our way on. Not everyone fit, but we made it on in spite of the line cutters, so Chris didn’t have to stab anyone in the eyeballs and drag them off the bus. We even managed to snag the oh-so-coveted seats on the right side of the bus for the best view of the coast.

Remember this bus ride was supposed to be part utilitarian, taking us to Salerno, and part attraction, being a pleasure filled ride along the mountains and through the villages. It unfortunately accomplished neither, but it did give us the opportunity to snap these fabulous shots. For this we can all be thankful. Woosah, Woosah, Woosah. 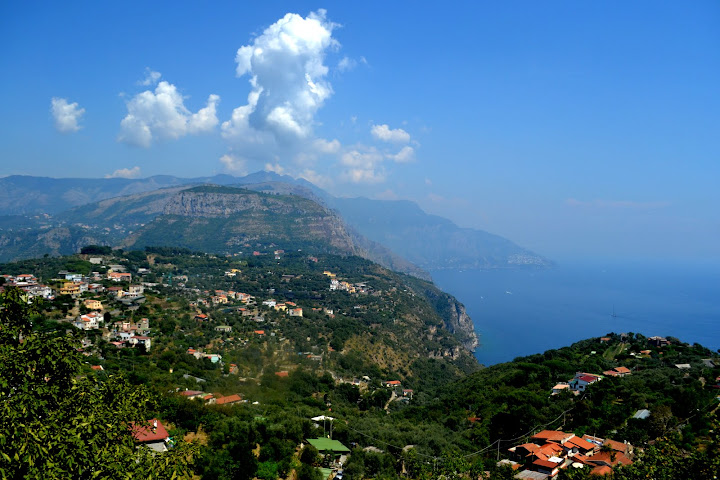 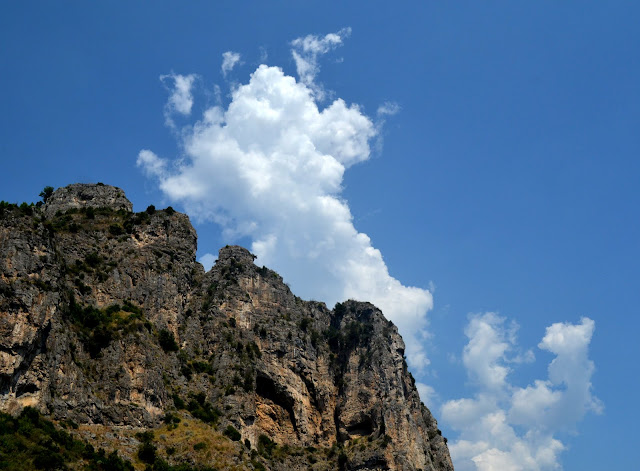 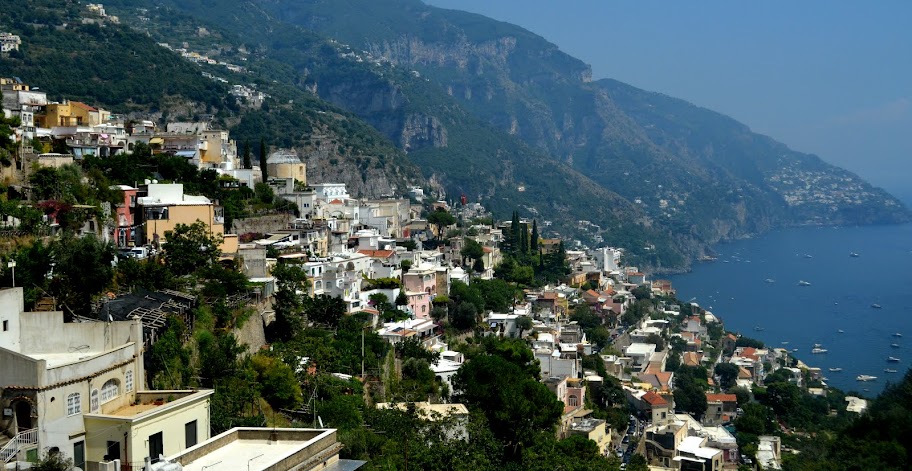 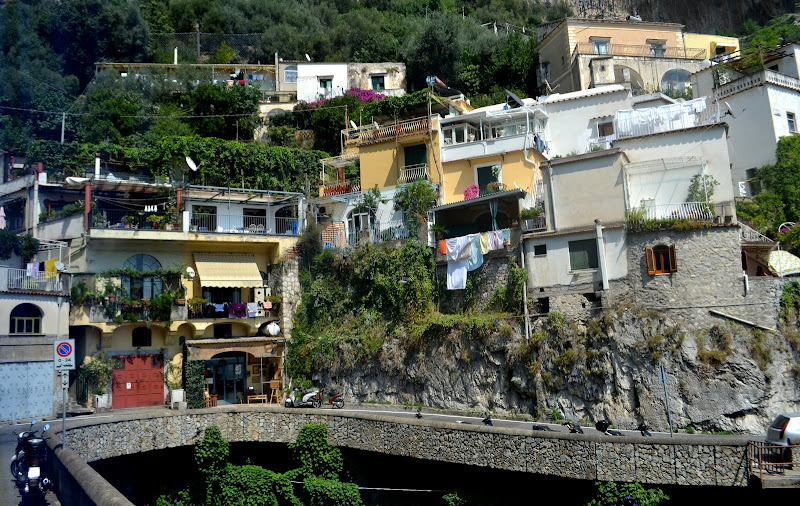 Who wants to guess what this bus was like? Do you think it was a.) something fit for a rock band to travel cross country with lush seats, plenty of leg room, ice box like a/c, etc or b.) no a/c, plenty of people without deodorant, crazy guy with evil-eye such that no one wants to sit down next to him on a crowded bus, etc??? So we are now living for the next great view to take a picture of and provide a distraction and at the same time hoping for the 3 hr trip to be condensed so it ends sooner rather than later. Ffffff, fffffff, fffffff – that is the sound of something blowing a strong wind into the now building fire. The traffic was absurd on this particular day and before we knew it, our dreams of ‘condensed’ quickly turned into hopes of on-time and ultimately deteriorated into the painful task of counting each inch of road that passed beneath us. Qualifying statement needed; this is not the type of traffic you are thinking of unless you lived in a mountain town at some point in your life. This is traffic caused by endless lines of people in both directions trying to use the same stretch of single lane road. Did we mention we were on a full size bus? You can guess how manageable it would be for an army of Mini-Coopers to manage this process efficiently, but when you add buses into the mix you run into challenges. The one thing that can be said is that bus drivers are flat out skilled as they pass through gaps with literally inches on each side and do it like it is no big thing.

After a couple of hours of this, including one half hour instance of sheer gridlock, we finally arrived in the town of Amalfi, which is where we needed to transfer to a different bus that would take us the rest of the way to Salerno. So onto the next bus we go and lo and behold, no a/c and plenty of super sweaty people. As we get ready to pull out onto the road, our bus gets stopped. After waiting for about 15 minutes, we finally learned that they closed down the road ahead due too much traffic and it would be an undetermined amount of time before we’d be given the green light to get on the road. Awesome…..

The saving grace was that there was a ferry available to take us by water the rest of the way to Salerno. Of course the ferry had a confusing queueing process, a long wait, a delayed departure and its share of line cutters. To boot, it was oversold due to bus-riders like us looking for another way out, so we didn’t make the first boat and had to wait even longer for the second boat to arrive. Thus the uptick from normal red to flaming red on the travel day index. Bright side though, great pics of Amalfi from the ferry! 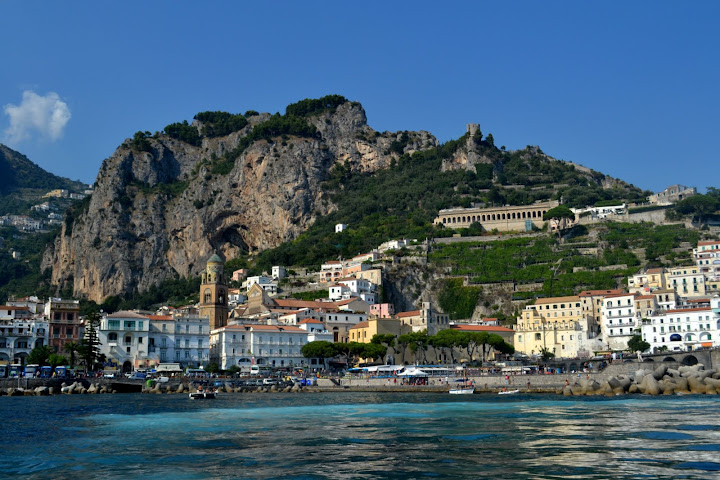 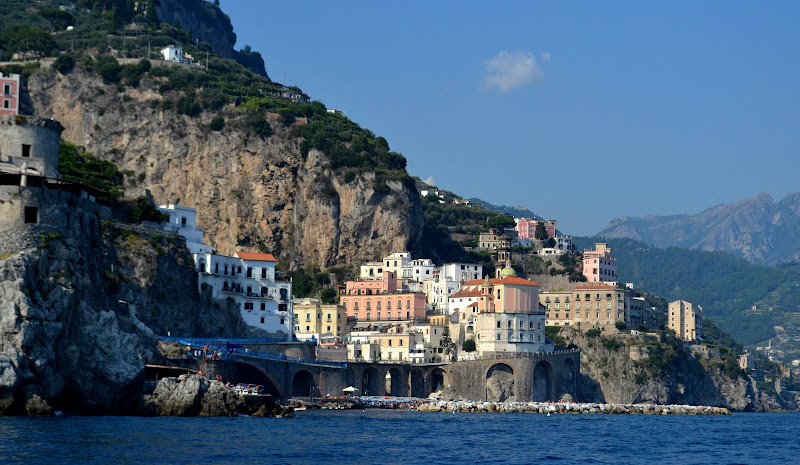 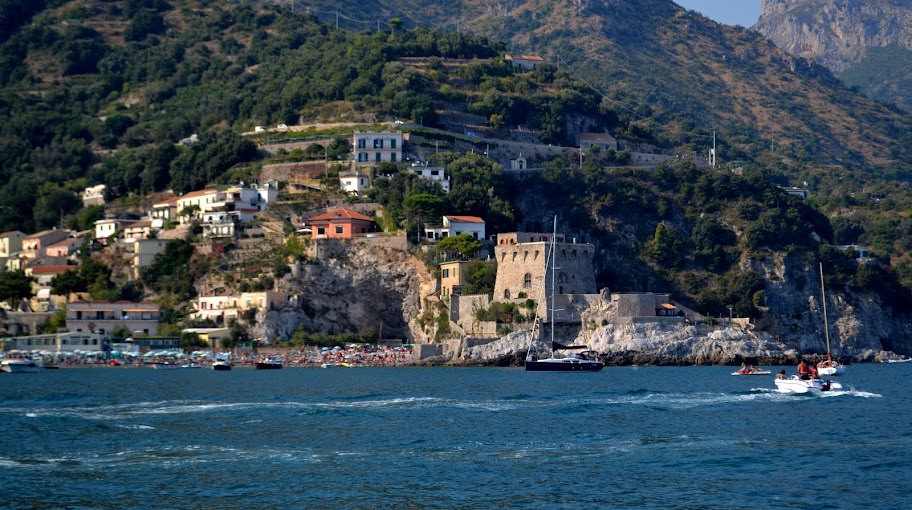 Finally, about 7 hours after we started our journey. we arrived in Salerno. It was nothing more than a meal and place to rest our heads because we had to take a 9 am train the next morning from there to Bari. Our hotel was walking distance from  the port, just off what appeared to be the main pedestrian street, and across the street from the train/bus terminal, so it served its purpose well. The next morning we hopped a 3 hour train across the country to Bari, where we had to take a bus to the port, and finally boarded our ferry to Greece.

Still fresh with the memory of our prior days woes, we braced ourselves for the ferry as we were only able to book aircraft carrier seats, as opposed to a cabin. Considering that this was to be a 16 hour long ferry ride, we resigned to the notion that we’d be able to sleep for not that many of those hours.

The boat was surprisingly pleasant; kinda like a cruise ship, but without the rock climbing wall and casino. The room with the aircraft seats was similar to the economy class of an international flight, with perhaps a little more leg room. We got lucky and were able to corner off three seats vs just the two we booked, but more seasoned ferry goers came much more prepared. Several people had sleeping pads/sacks, along with blankets and pillows that they just rolled out in between the aisles and at the rear of the room and dozed off in comfort.

Sleeping on the boat was about as difficult as being on a plane, but we got some shuteye in after tossing about for more than a hot minute. The next morning we woke and had some coffee with a group of travelers from the US and UK. One of the girls was struggling to decide where to live in NY and somehow the conversation turned into Chris teaching a class on how to maximize your credit score. One of the girls even asked if she could take notes. We hope we provided good council.

In addition to the crew we met during breakfast, we merged with a larger group of young travelers who were all heading into Athens. We will save that part of the journey for our next post on Athens and Santorini – stay tuned!!