*Arrived in Athens on August 19th and Departed on August 21st

Our two day trek from Italy to Greece didn’t end with the 16 hour overnight ferry experience. We still had to get from the port in Patras to Athens. The first choice we had to make was either a private bus transfer for 20 euros or the public bus to train, which we knew from our travel guide to be only 12 euros. Seeing as we have previously in our trip taken a $300 cab and paid $900 to fly the equivalent of New York to Boston, it is still a mystery as to why we didn’t just plunk down the extra 8 euros to put an end to the traveling madness. We blame it on sleep deprivation.

We parted from the girls we met over coffee that morning, but hoped we would meet up with them again as we were all on the same ferry going to Santorini in two days. They decided to take the private bus which picked you up right from the ferry and took you straight into Athens, whereas we took a free bus shuttle transfer over to the bus/train depot along with a bunch of fellow trekkers from our overnight ferry who became our loosely confederated travel pack.

The travel guide made it seem like it was a simple thing to get from Patras to Athens either by bus or train and implied they both run regularly and are direct shots into the city. Aaannnttt, wrong, try again Lonely Planet. We quickly learned that you actually have to take both the bus and the train, in addition to making a couple of transfers. Unfortunately this isn’t well explained during the ticket buying process, but with the little nuggets of info gathered from the collective group of travelers, we managed to get the story via someone who had done it before.

So the first leg is a bus to the train station. Tick, tock, tick, tock. Do you think it occurred to anyone to sync up the incoming trains with the outgoing buses – not even close, thus we wait for an hour. This is about when it starts to sink in that our great adventure is not even close to over.

Second leg of the day is a train. We get off the bus and are told we have 25 minutes until the train will arrive. Ugh, why can’t they make this seamless we ask. Alas, we decide to kill the time with a cup of coffee, so Val leaves the platform to head back to the vendor in the front hall of the station. Pssssssst, air brakes, ahh the sound of the train arriving two minutes later. Inside Chris’ head you could have heard such rambles as – “what stupid motherfucker thought that was 25 minutes” or “If we have to wait another hour to catch the next train I may kill one of these dumb ass sons of bitches.” Luckily, Val figured out it was our train and scurried back to make it just as the doors shut. Phew, no massacre in train station.

The satisfaction of making the train was short lived. We plop down, earphones on and start watching our iPad to kill the time and then we hear it – “Oops I Did It Again”. At first there is confusion. Has our iPad gone on the fritz and started playing Britney Spears? Has the train elected to entertain its passengers with the melodies of Ms. Spears? No and no, there is some 45 yr old Greek idiot playing music on his laptop, sans headphones, with the volume up as loud as he can make it. We turn and look at each other to make sure this is really happening – yup it is. A quick look around to the other passengers of the train confirms we are all hearing the same thing, Britney fucking Spears at 1000 decibels. Of course Val mutters under her breath, “is this really happening?” and Chris replies loud enough to conquer Britney, “Yes, it’s that rude old fuck over there playing his music without headphones”. He was only two seats over, but Val is not one to stir the pot so we backed away from pushing him into a forced confrontation and for the next hour we got to hear a lovely rotation of Britney, J.Lo, Beyonce, and Gaga. Don’t get us wrong, we love a good dance tune, but this wasn’t the time or place for it. Needless to say when the train stopped we were more than happy to get off.

We transferred to our second train of the day, leaving behind ‘I never heard of headphones guy’ to entertain some other tourists. That train took us into the city no problem and we could finally see the light at the end of the tunnel. Quick look at a map to get orientated and we negotiated a fee with a cab to take us to the hotel. This cab was the proper ending to our adventure. The driver was a bit eclectic and took great delight in pointing out the cocaine and heroin peddlers as we drove through the city. Finally we reached the hotel – another Best Western! We were starving and it was late, so we headed out for a bite to eat and quickly returned to get some much needed sleep.

The main attraction in Athens is of course the Acropolis. We set out the next day to ascend its famous hill and see the Parthenon and surrounding ruins. Similar to Palentine Hill in Rome, it is a place in which you can feel the rich history and  wonder what it looked like in its glory days. 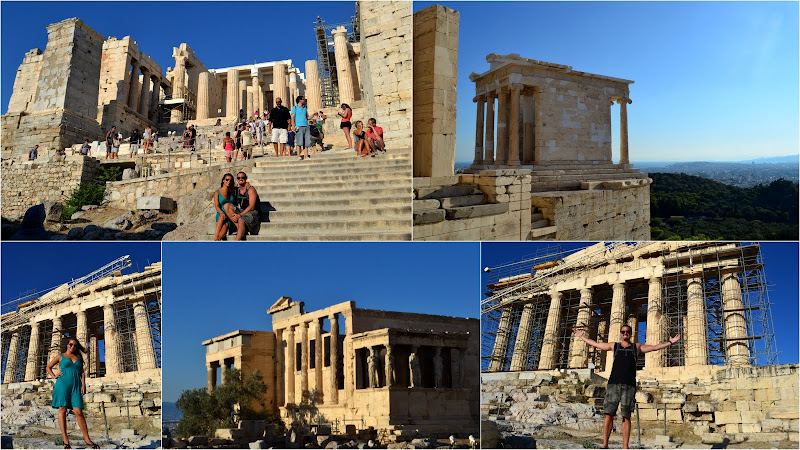 The actual Parthenon was under restoration and reconstruction. We learned that everything except for the columns was either compromised from the weather or removed at some earlier date for preservation. There is now a project to bring it back to its glory days using replica pieces. 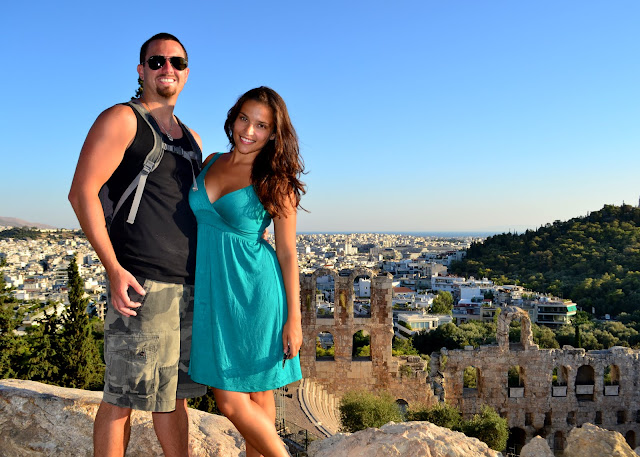 From the top of the hill you can observe all of the Acropolis and town of Athens. The amphitheater you see in the pictures is not original either, it was built recently to house plays and concerts as a revenue producer for the grounds.

Outside of our trip to the Acropolis we also walked the historic part of town and did some fine dining on much appreciated Greek food, but mainly we slept off the last couple days of traveling fun.

Next stop is the isle of Santorini, known for its fabulous beaches and iconic sunsets and Crete, where we indulged in luxury!