The title to this post may make you think of a second rate magic act, the act you would see if you were too cheap to buy tickets to see the Great Houdini. In fact, there is nothing second rate about the isle of Santorini.

We continued our string of ruff-going with an early morning departure from the port in Athens on a small, person-only (no cars) ferry. Travel index for the day would have been orange on account of the continuous smell of diesel fumes and endless rocking back and forth from the ocean due to the abnormally bad weather conditions. We were nauseous the entire time, so thus orange.

We did get to meet back up with our friends from the overnight ferry and enjoy a cup of jo while trading stories of our Athens experiences – they had also picked the Acropolis as their attraction of choice. When we regaled them with the story of our travels getting into the city, congratulating them on their choice to ride the private bus even though they were on a tight budget, they let us know that the best part was it only ended up costing 15 euros. Lesson learned – private all the way from now on!

Since we woke up so early to catch the ferry, we made a nap priority number one once we checked into our hotel. That night we grabbed a bite to eat down on the beach and later had a snack from a bakery that is open 24 hrs. If you ever find yourself in Santorini, we highly recommend you stop in, but unfortunately we can’t give you the name. Just ask for the bakery in the center of the village of Perissa. It is in a yellow building, next to a laundromat and here is a picture of their logo. Maybe someone who understands Greek can discern what the locals call this place since Google can’t? 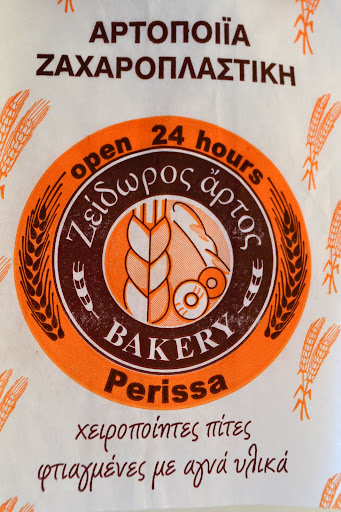 Santorini has five main villages. The big one in the center of the island is called Thira. It has no beach and acts as the spoke for all the roads that will take you to the other four. On the south end of the island is Perissa. This is where our hotel was located, only minutes away by foot from a fabulous black sand beach. North of Perissa but south and east of Thira is Pyrgos, which is Greek for highest point, and thus you can conclude it sits on a ridge in the center of the island. Further to the east is Kamari. Kamari also has a nice black sand beach and the boardwalk is much more developed with restaurants and shops. Lastly on the north side of the island is Oia which is the ritzy village. It sits on top of the cliffs and has more high end retail shops and restaurants running down a main street. This is the town that is in most of the photographs that you see of Santorini. It is also supposedly the best place to see the Red Sunset that Santorini is known for, but we will save those pics for below.

The first cool thing you notice about Santorini are the towns. Their two most prominent characteristics, built on top of the cliffs and painted entirely in white, create a cool effect from the distance. They look like snow caps. 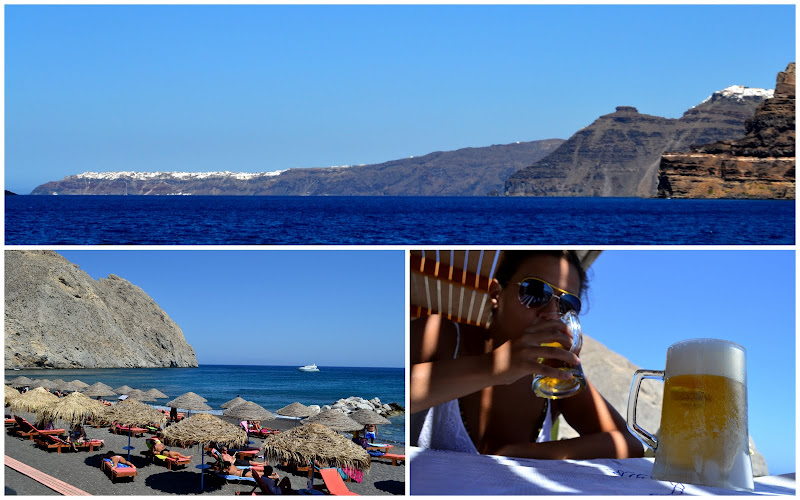 Day two was a beach day, and thus we moseyed down the path to the beach in Perissa. The black sand (more like rocks) does not lend itself to laying out without a chair so we rented a couple loungers with an umbrella and chilled out for the entire day. The water is crystal clear and just the right temperature to cool you from the hot sun. The funky thing was that the bottom of the sea is all one big fuzzy rock ledge – no sand or stones, just a hard, flat shelf that is covered in algae so you feel like you’re walking on an underwater carpet. The boardwalk in Perissa is not as developed as the one in Kamari, but it still has plenty of restaurants and shops none the less. We ate at one spot claiming to have world famous hamburgers, but sadly they were not even close to a Shake Shack or Houston’s burgers from back home.

That evening we had an ATV dropped off at the hotel, so we could more easily navigate the island. We went with four wheels instead of two (scooter) as we have not had positive experiences with the latter. For those that don’t know the story, our first scooter experience was quite brief and bloody – Chris nearly ended our lives (that may be a slight over exaggeration) in the  U.S.V.I. after only 15 ft of riding by skidding diagonally across the road and crash-landing into the curb. With the use of our ATV we decided to head to Kamari that evening for dinner and a movie (the movies in Greece are all in original format with Greek subtitles). In Kamari we happened upon a fabulous dinner spot called Vuxtepi. We saw Horrible Bosses, which was better than we expected and since we have been sans movies for a while it hit the spot. Chris’s note: The scene with Jennifer Aniston as naughty dentist boss in her white coat is quite entertaining.

The highlight of the day though was the Red Sunset observed from the middle of the caldera on the path from Perissa to Kamari. The old adage is ‘a picture is worth a thousand words’ – using that logic, we estimate the experience is worth a million words. We tried to capture its greatness in these shots, but even with our fancy camera we don’t think it captures being there in the moment. It was simply breathtaking! 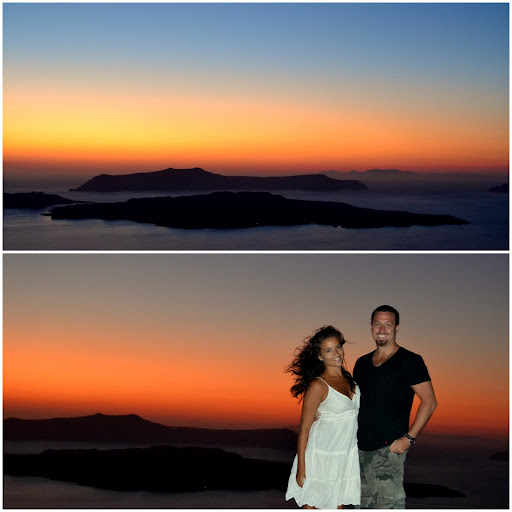 The next day we set out on the ATV to find the Red Beach. Santorini has multiple black sand beaches, one red sand beach and one white sand beach. Arriving at the Red Beach, we were glad we had an ATV vs. a car as there was no parking and it was a lot easier to stow the ATV on the side of the road. From the parking lot, it is a  bit of a hike to get to the beach, but well worth it as we have never seen nor heard of a red beach before. For any of you reading along who live in Georgia and/or are familiar with Georgia red clay, imagine a beach made out of that. As with the black sand beach, they really should mean red rock beach, but the rocks are more like small, smooth pebbles so it is not uncomfortable to the feetsies. 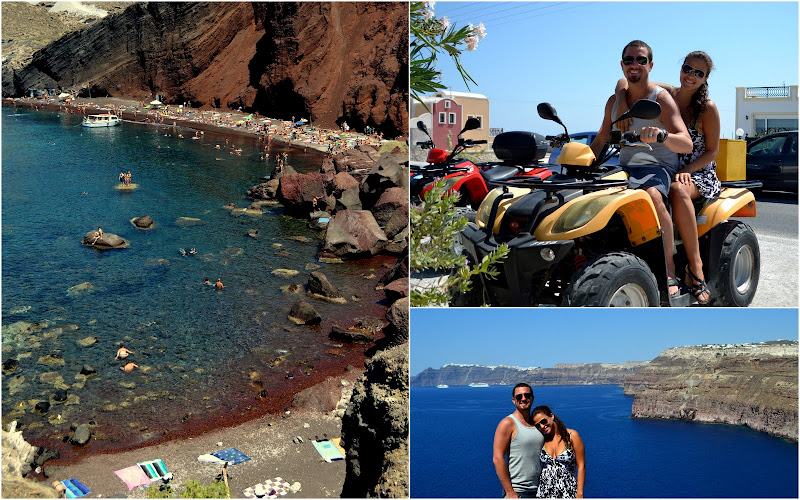 After swapping the ATV for a car that evening, we raced up to see the sunset in Oia. It should be noted that the car was delivered to the the hotel with only a quarter tank of gas. The sunset in Oia was beautiful once again but we disagree that it is the best spot on the island. First, you have an entire islands worth of tourists crowded into one place. Avoiding that alone is one reason to say it is not the best. Second, the view from the middle of the island, which is also the middle of the caldera, allows you to capture the rest of the island plus a few other islands in the background of your photos. Because we raced up to Oia to catch the sunset we did not take the time to fuel up the car, so we were now on empty and in desperate need of a gas station.

Once in the vehicle, we had to pick a direction to head in to find a gas station muy pronto. Since we had no map, we picked a right out of the parking lot. Remember that every tourist on the island is in Oia for the sunset, so the road is jammed with cars. Right was not right and we ended up down at some port without gas, so we had to turn around. Once we got back to the starting point, it became evident that the gods don’t want us to have any gas, there is a log jam of traffic – we are talking complete standstill. Since we have little precious gas left, the guessing game is over and we hop out to inquire from a local which direction the nearest petrol station is. She replies “back in Thira” as in there are no gas stations in Oia at all. Chris has now escalated from doomsday scenarios to profanity mode – “what fucking town has no gas station”, “wouldn’t want to put a gas station on the northern half of the fucking island, that would make too much fucking sense.” Val, being the cool-headed rational one, talked him into parking the car and grabbing a bite to eat, thus avoiding the gridlock traffic and conserving what little fuel we have left. Turns out the gas station was 19 km from Oia and we made it. The rental company said we could make it about 25 to 30 km once the light came on so we likely got there in the nick of time.

We still had the car the next day so we drove around the island once more. The landscape of Santorini is much different than what we expected. Most photos that you see of Santorini are just of the white houses, with the blue roofs/shutters, overlooking a cliff, so we were surprised to find that much of Santorini resembles the desert. Aside from the clusters of villages, much of the land is rolling hills and valleys. The climate is arid and dry and most of the greenery you see is vineyards.  We stopped to have lunch in Kamari, did a little shopping and then went back to rest. Of course that evening included a trip back to our favorite bakery. 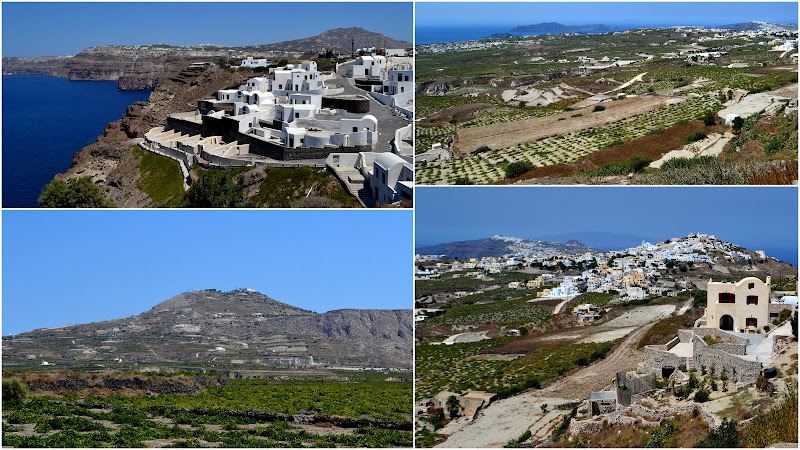 The next day we hung out by the pool and had the hotel keeper, SiSi, make us some drinks. She was a real pleasure, helping us to book the ATV and cars and find the movie theatre. She also makes a killer caipirinha!

While we had some quality beach time in Santorini, we were already anticipating our stay in Elounda, Crete where we had splurged with points to stay at one of Starwood’s five star properties!