* Arrived in Istanbul on August 30th and departed September 4th.

While this blog is undoubtedly written from an America-centric point of view, it doesn’t feel like a stretch to label America as the world’s current superpower. Aside from representing only a micron of the world’s population, we easily dominate the landscape in military prowess and economic influence…at least for now. Under this train of thought, there is certainly an argument to be made that New York is by deduction the capital of our current world. Before New York, the world had London (before our forefathers threw a little tea party), and in the distant past you of course had the reign of many great Caesar’s in Rome.

That little rant about world powers is only completed when we add to the list the great city of Istanbul, which was the capital of many empires including Roman, Byzantine, Latin, and Byzantine. One needs only to look at its geographical position to understand that this place has got a lot of history under its belt. Situated along the banks of the Bosphorous, straddling both the Asian and European sides, it is the only city that spans two continents! For this reason we could not have been more excited to vacate our luxury resort in Elounda and move a short hop east to Turkey.

To break up our days in Istanbul, we give you two posts. This first one will center on our first impression and the food and the second will take a look at places we visited and chronicle our adventures in the bazaars.

First impressions always being important, Istanbul gets off to a great start with a clean airport and extremely efficient transfer system into the city. Our hotel, the Best Pointe, was a small boutique dwelling in the heart of Sultanahmet – the historical old part of town. As we drove to the hotel, we passed the Blue Mosque, lit up in all its glory and the Hagia Sofia right next door. As beautiful as these attractions are during the day, they are a sight to behold at night. We will take you through those experiences in more depth in post number two.

Checking into the hotel was a bit of a process. This would be on the far extreme of our prior experience in France where we checked into the hotel using the equivalent of an ATM machine. Before we could even present our passports, we were offered apple tea or another drink of our choice. In subsequent days, we found this is customary in Turkey, as everywhere we went we were offered tea.

After a long day of travel we were a bit anxious to simply be shown to our room to get some rest, so we declined the tea, but of course that did nothing to deter the receptionist from his long welcome speech. After tea came an offer to sample another regional favorite, Turkish Delight. At first we resisted this offer too, hoping our second attempt to hurry him into processing us and letting us pass would get a different result – no such luck. Instead he persisted, engaging his selling techniques, telling us all the reasons why we must try this national treat. Chris finally relented. Turkish Delight is an odd little candy. Its base is a lightly flavoured gel substance most closely resembling the insides of jelly beans. Its flavour profiles range, but most include a nut and some form of a powdered sugar or shaved coconut. We should have held strong and continued to decline all offers because once we caved on the Turkisk Delight, it wasn’t long before we were sampling the tea and sitting in the lobby chairs being given a prep talk about all the things to do near the hotel, brochures and all. Fifteen minutes later, with many “when will this end” stares across the table to each other, we were finally escorted to our room. The kicker was it happened to be the first door just past the attendant’s desk, no more than 8 ft from where we sat squirming in our chairs.

The next day we made two chance encounters within the first 100 ft outside the hotel doors. Located across the street from our hotel was Cooking Alaturka, which offered a four hour culinary adventure in which you helped to prepare a Turkish meal and then dined with your fellow sous chefs. Best of all the class was actually affordable, only 60 euros per person vs. the ~190 euros we saw in France, Spain, and Italy. We quickly signed up for a class the next night.

The second chance encounter was meeting a shopkeeper named Tim. He worked at, or owned, a carpet store and upon seeing our interest in his store engaged in a conversation. If this was a sales tactic, this guy was smooth – you instantly felt like a friend. In the front window display of his shop was an old Turkish woman weaving a silk rug. It was fascinating to watch her work her magic and even more great to have Tim explain the process. To complete the rug, will take 15 months total! 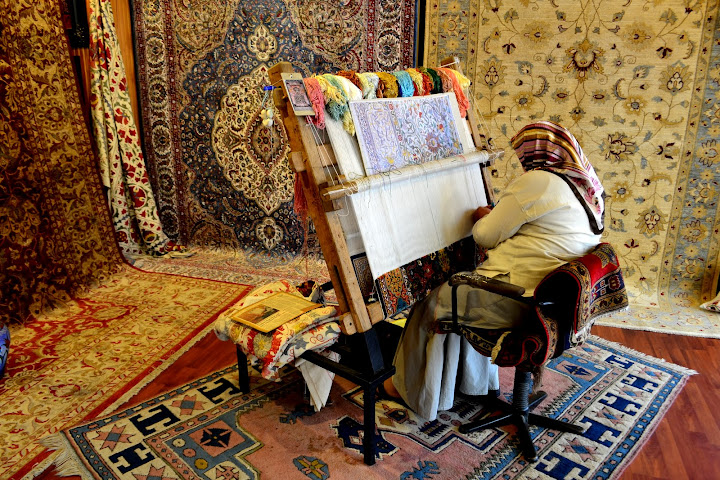 Then he volunteered to show us more of his rugs. We tried to make it clear from the get-go we were not in the market to purchase, but surely he hears that a lot and pressed right through. The silk rugs play an amazing visual trick on you, depending on which end you look at it, it either appears dark or light. This optical illusion results from how the knots are tied. The workmanship is truly first rate and the prices reflect that – small silk rugs start from $2k, with large floor rugs being $20k or more! Considering you could sleep on these bad boys, if you are $15k kinda rug people, we encourage you to make the trip over.

Tim was also kind enough to give us the names of a couple restaurants where the locals eat and gave us some tips about what to do with our time in the city. One tip we can pass along is to look for the restaurants that don’t serve alcohol as those are the ones the locals eat at. He also had an interesting friend who fancied Val’s exotic beauty and at one point leaned in to ask Chris “Can I ask you a private question…..how many balls you have?” and “How many camels did you pay for her?”

We were looking for a spot to eat, so we took Tim’s suggestion and had the first of several great Turkish meals. Wanting to sample a little bit of everything, we typically started off all our meals with a meze plate. Very similar to what the Greeks do, the Turkish meze plate is a sampling of a several spreads and appetizers. Many of the spreads are yogurt-based, include feta, and feature roasted peppers and eggplants in various preparations. Surprisingly, Turkish food is also light on the hummus, especially in the local spots. The mezes are accompanied by Turkish bread – crunchy/crispy on the outside and fluffy in the middle. 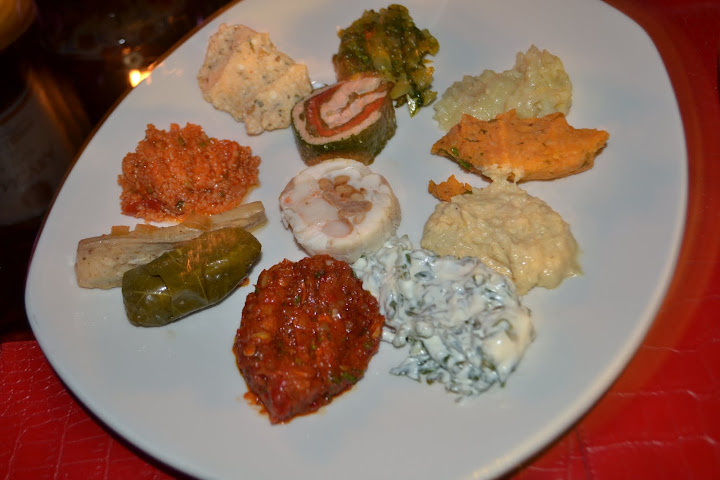 They also make a Turkish pie, which by its price appears to be a starter, but be forewarned, it is the equivalent of a personal pizza and thus very filling. Similar to a pizza, the bread is thin and the most common topping is minced meat with finely chopped veggies in a light tomato based sauce. Lastly, the most popular of the starter courses is the staple of the Turkish meal – lentil soup. When done correctly this stuff is the perfect beginning to any feast. We learned how to make one in our cooking class and after sampling several other recipes throughout our time in Turkey, this is still our favorite version! We will post the recipe in seperate follow up post, if anyone is curious to try it 🙂

For the main course, you have a wide array of meat and fish choices. Just like their Greek neighbors, the Turks are master grillers and we frequently ordered the mixed grill which gave us a sampling of lamb, chicken, and beef – all perfectly seasoned and grilled to perfection. While they see enough tourists to warrant putting a traditional hamburger on the menu (bun included), they more commonly serve kofte (ground meat patties) either in a sandwich or over rice. These are very similar to our hamburger patty, the Greek bifteki, the Russian katleti, or the Croatian cevapi. Every dish comes with veggies, typically grilled and a small starch portion.

Almost all of the restaurants have terraces situated on the penthouse of their respective buildings, which adds a great element to the meals, not to mention a beautiful view. Bring a pashmina or a scarf for evening meals, as it will get a little chilly.

No culinary review of Istanbul can be complete without a look at the street foods and a visit to the Spice Bazaar. The Spice Bazaar seemed more like a tourist attraction vs. an actual market where the locals get their food wares. Regardless, it smelled every bit as heavenly as we’ve been told! Everything from desserts, to spices, and oh so many teas – it was a feast for the senses. 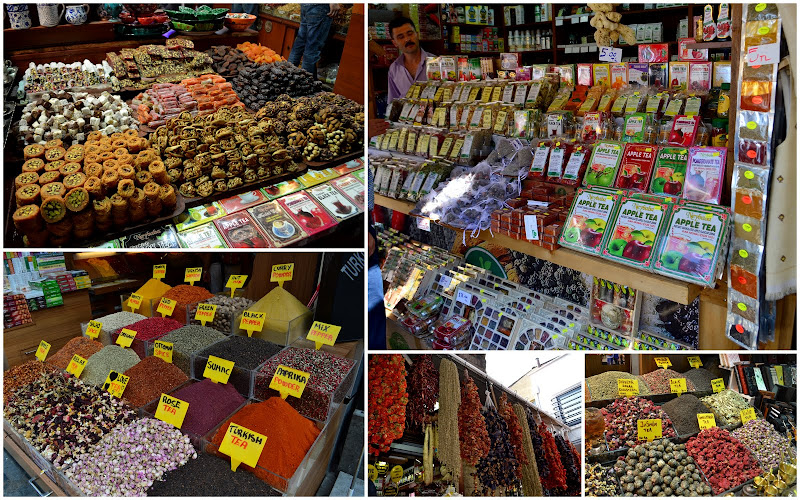 As we walked around we also noticed that Istanbul has a lot of street food and more of a variety then we’ve seen in other cities so far. On the savory side, the most commonly vended is grilled corn and kebab. They also do rice served out of what looks to be an old fashioned popcorn machine and hoaggie rolls stuffed with shredded meat and veggies. 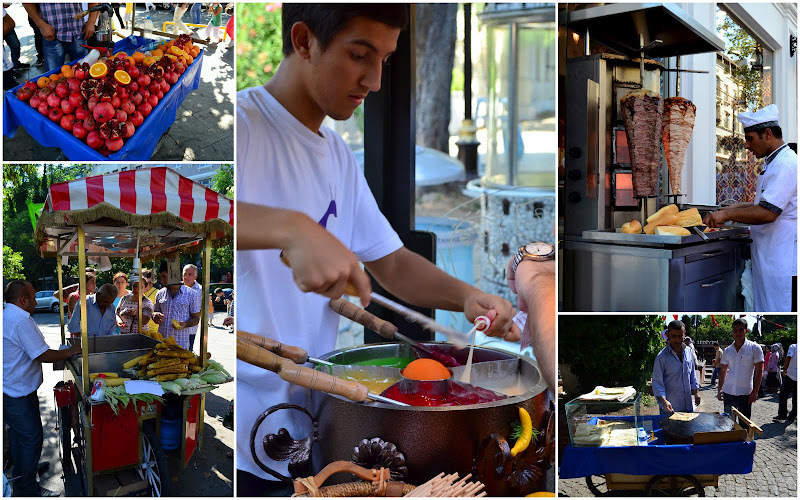 On the sweeter side of things, you have several options – the handmade lollipop, amazingly viscous ice cream, or fruit. We did not try the lollipop, but got a picture of a vendor making one and we did try the ice cream, but would not advise you do the same. They offer the ice cream in 5 flavors, but really it is just a choice of colors because all the flavors have the same generic rubbery taste and consistency. If you’re looking for something fresher, there are many stands offering fresh squeezed pomegranate and orange juice and sliced watermelon.

By far the best experience of our visit was to assist in the cooking of our own Turkish meal. Cooking Alaturka is a must on any visit to Istanbul – the owners are extremely worldly and speak great English and the chef is very talented and a bit of a joker which keeps the class nice and light.

The group, which is typically 8 to 10 people, helps to prep all the ingredients and assemble them for cooking. The chef did most of the skilled work, but includes someone from the class whenever possible. For prep duties, Chris volunteered to tackle onions, which involved slicing an onion meticulously thin, and Val chopped up garlic and herbs until they were fine enough to seamlessly blend in. In phase two we all got to learn how to best gut an eggplant and stuff it and how to roll our dolmas, which are stuffed grape leaves. Here are some shots from our culinary adventure: 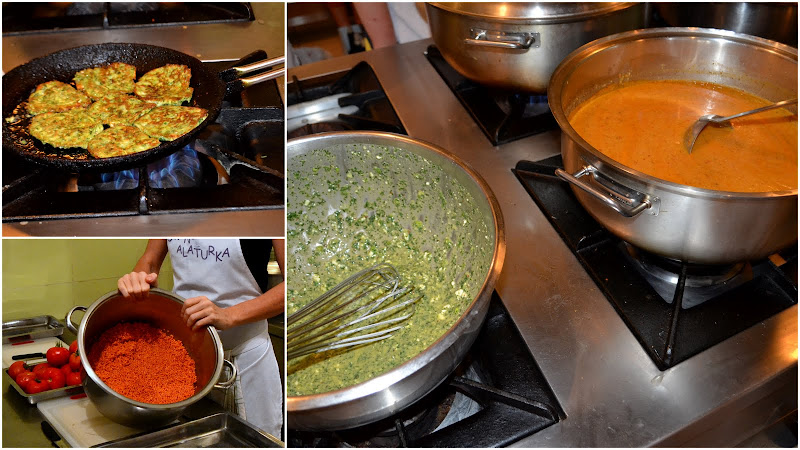 The red lentils were the main ingredient in the lentil soup and the green mixture is zucchini, herbs, and a feta-like cheese for zucchini pancakes. 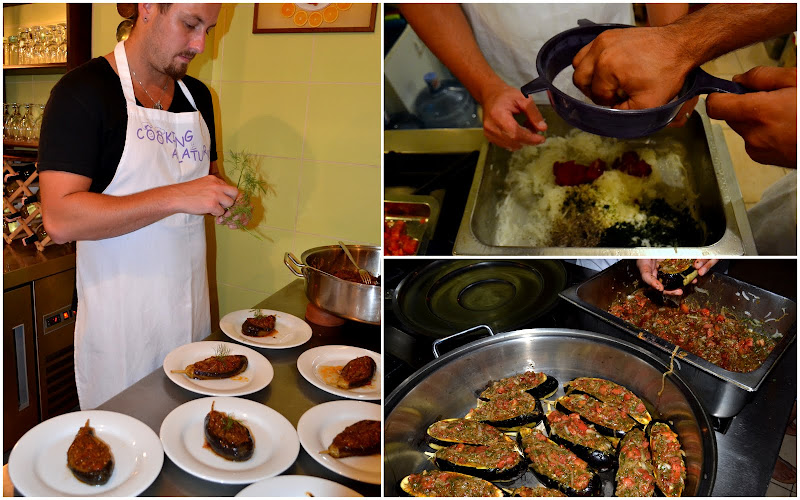 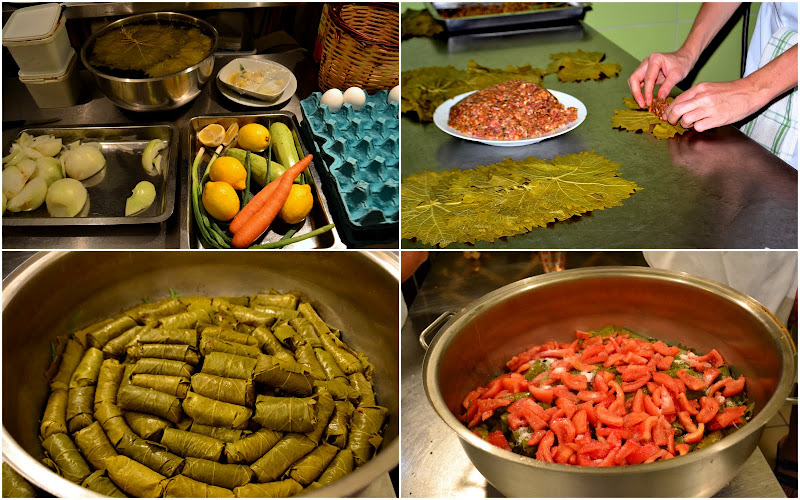 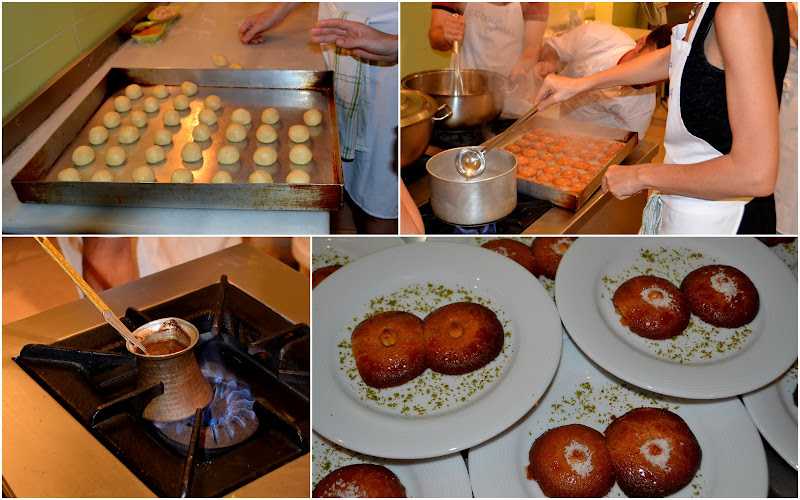 Cookies for dessert, which were doused in simple syrup…and of course, turkish coffee!

Hopefully you can tell we enjoyed Istanbul immensely by our excitement about the food, but that is only half the story as we have yet to tell you about all the places we saw. Stay tuned for part two on the mosques, temples, cruise and our experience shopping at the bazaars!