* Arrived in Istanbul on August 30th and departed September 4th.

For those of you who have never been, Istanbul is no small city. Interestingly, it is the largest city in Europe and thus, it is near impossible to experience it from all angles within a week. Our hotel was located in Sultanahmet, which is the old part of town and is home to the majority of the must see attractions such as the Blue Mosque, Hagia Sophia, Grand Bazaar and Spice Market.

Our friend Tim, from the carpet shop, advised us that one of the best ways to see the city was to take a ferry tour of the Golden Horn and Bosphorous. Seeing as we enjoyed his culinary suggestions we decided to follow his advice. The boat was far from a luxury liner, but considering the purpose was to sit and observe the city, it didn’t need to sparkle to do so.

As to the merits of the cruise, we’ll get into that a little further down below, but first a side story. It is not a stretch to say that Val likes to snap a couple photos now and then. The reward for such diligence and constant pushing of Chris’ patience is evident in the beautiful pictures featured on this very blog. So who is to say where the line is drawn between just enough and too many pictures…..it is debatable at the least.

What is not debatable is this couple crossed that line by every standard. 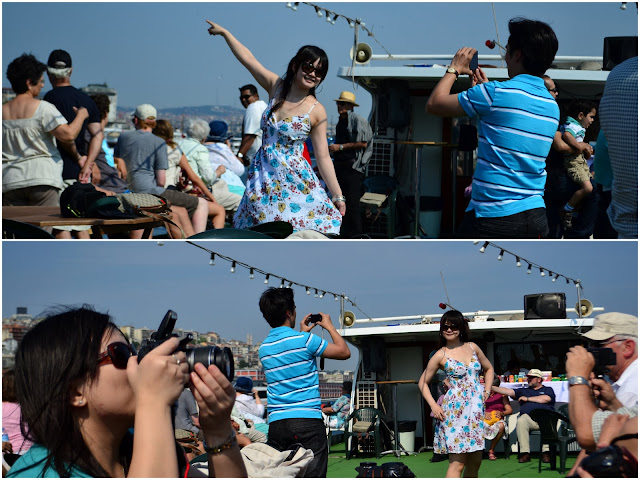 When they got on board we thought they were simply another couple looking forward to seeing the sights and capturing a marquee photo to show their family and friends back home. Instead, they took enough pictures to send a unique view to everyone in their family tree for the past ten centuries.

Before the boat even left the port, there were 15 glamour shots against every possible angle of the same backdrop. Chris wanted to ask someone if they had Dramamine, it was so nauseating and the boat hadn’t even filled up yet. By the time everyone was on board, there were already twenty plus minutes of whirlwind photo taking – note the engine wasn’t even on at this point…we hadn’t moved an inch. By the time the boat took off, one had to wonder if Kodak had invented a 3,840GB SD card. Or maybe they invented new cutting-edge technology which allows photos to be instantly stored in a cyber cloud?

Vroom – the engines kick on and the boat pulls out into the harbor. The tasmanian duo are now spinning around fervently to capture those perfect 8 or 9 shots with every building taller than three stories in the background. “Oh look, another gray one, hurry spin around so I can be sure to get you with it.”

Other guests are not even looking at the sights because the photo-taking spectacle just begs one to stare and wonder. Why do they need seventeen shots of that angle? Aren’t their legs getting tired? Can you get cancer from too many flashes? How long can this possibly last? Does one of them have a terminal disease? Does Sony test cameras to ensure they don’t spontaneously combust after constant use?

Mind you, we are now forty minutes into a four hour boat ride and they literally have not stopped for a rest yet. The picture counter on this camera now reads like a billboard in front of McDonald’s – 9,456,290,345 and counting. At about an hour in (no joke, the entire first hour spent in glamour poses, trading off the camera and snapping single shots of each other with random buildings in the background) they now ask fellow patrons to start snapping couple shots of them together. So they now have conspirators in one of the greatest crimes against humility ever committed.

At this point, the entire boat is talking only about this couple. Mosques and cultural sights are floating by unnoticed as each group is actively discussing how long it can go on and what motivates humans to do something like this. One hour, fifteen minutes; one hour, forty-five minutes; two hours!

The conversation now switches to the camera – “we should ask what brand that is”, “our battery doesn’t last that long, does it?”, “did he swap out SD cards lightning quick and I missed it?”

Two hours, thirty-five minutes and finally it stops…..we had parked the boat to walk around a little village. It starts again as soon as they are off the boat. Unreal! Ten minutes of photo-taking on the dock of both getting off and returning. The spectacle just didn’t end.

Long and short this couple took more photos on a four hour boat ride then most people take in a lifetime. In a word, it was simply ABSURD! 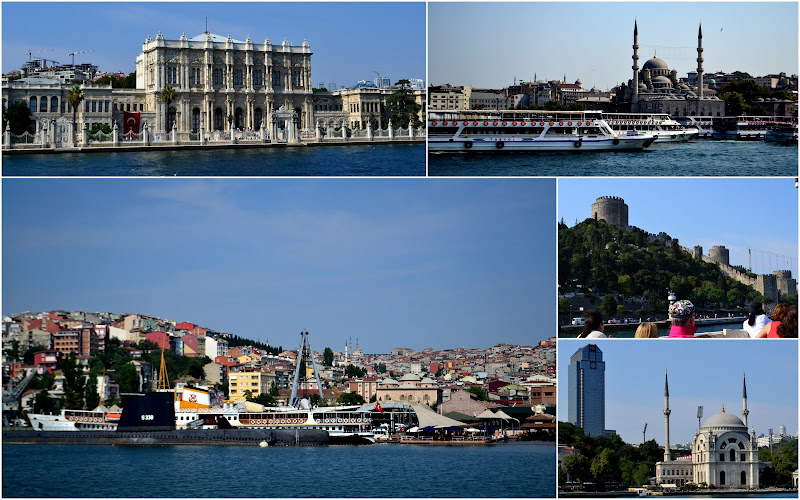 As for the merits of the boat ride, absent the guest entertainment, we did not enjoy it quite as much as Tim had thought we would. First, the commentary is not all that informative or easy to understand. Second, the landscape of the massive city is more homogenous then one would think, so twenty minutes in you have the feel of it. The two coolest things were being able to hop off and have a bite of local street food in the little town and ogling the mansions just off the water which are some of the most expensive homes in the entire world. To get both and save a couple hours, we would recommend you simply hop a ferry from the old town and save yourself some time for other attractions.

Two attractions which are must-see’s, situated directly across from each other in Sultanahmet Square, are the Blue Mosque and Hagia Sophia Museum.

The Blue Mosque is free to enter, but entrance is not allowed during prayer sessions, so there are limited windows in which you should show up. Keep that in mind before you head over. The mosque gets its name from the blue tiles which line the walls within. Notice in the picture the hundreds of strings anchored into the ceiling which drop down to just above your heads and hold massive chandeliers. We don’t understand what purpose they serve (except to muck up our photos) – maybe someone can clue us in? Similar to St. Peter’s Basilica, the mosque requires that you are covered up and additionally, that you be de-shoed. Since the visitors don’t wash their feet prior to entering, there is unfortunately a lingering smell. They should form a partnership with the Rug Doctor. Joking aside, it is a grand structure and the tile work is extremely unique. 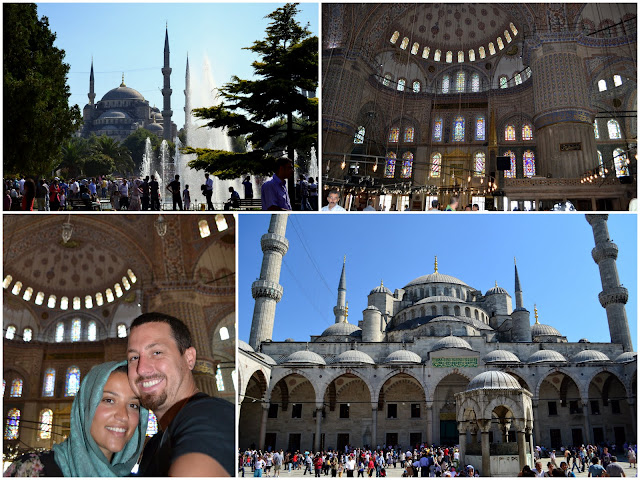 Just across the way is the Hagia Sophia Museum which was originally a cathedral, which was later turned into a mosque, and is now fully converted into a tourist museum. The line to get in is not all that long, but was certainly confusing to figure out how it worked. They have a separate line for Turks and all others and the Turk line is seemingly longer? While the outside is similar to the Blue Mosque, with many domes and spires, its interior felt more like a basilica, which makes sense considering that it was built by Christians. The interior is very old and hasn’t been renovated, so a lot of the murals were chipped away or fading, but it certainly didn’t take away from the grandeur of the main hall. 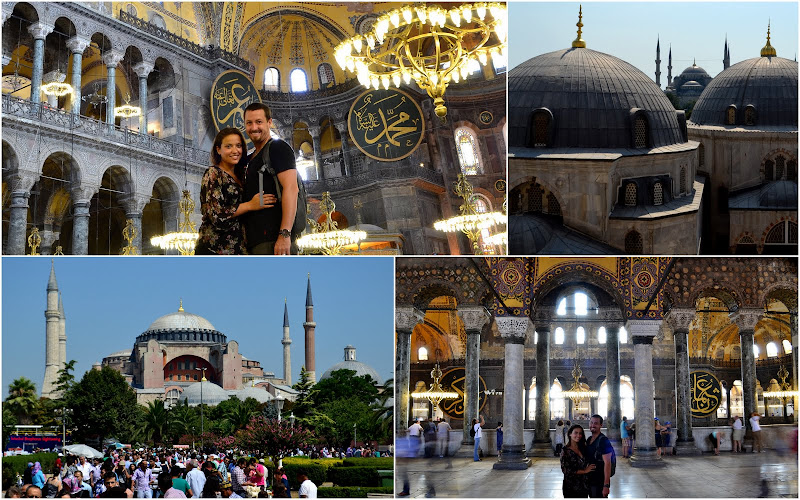 No trip to Istanbul is complete without a shopping expedition to the Bazaars. Around the block from our hotel was the Arasta Bazaar. It is a micron of the size of the Grand Bazaar, only taking up a single street. It is much less intimidating to walk through compared to the Grand Bazaar, and while smaller in stature, still has the same selection of goods represented in the bigger Grand Bazaar. Our shopping efforts where focused on jewelry and we found a couple pieces in this bazaar to be the right value. As for haggling over price, it was not as aggressive as one would imagine. After taking part in a few transactions and watching others in front of us, the prevailing math is that most deals are struck at about 10% off quoted price for a single item and between 15% and 20% when purchasing multiple items. 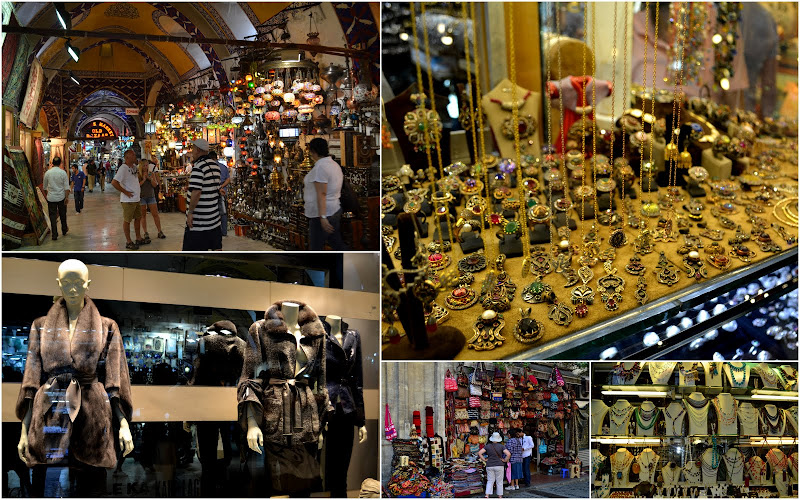 As for the Grand Bazaar – the place should be labelled the Grand – Grand – Grand Bazaar as it is more massive in scale then one can imagine. The entire Bazaar is covered, so rain or shine it is filled with activity. The exception being on religious holidays – the first time we should up was the last day of Ramadan and it was closed.  A rough estimate is that it encompasses something close to 10 square blocks of streets. All of them lined with open front stores jammed to the brim with scarves, handbags, coats/furs, lamps, tiles, carpets, jewellery, spices, tea and more. Much like Canal Street in NY or the open leather market in Florence, the infinite number of shops seems unnecessary as they really only vend 10 or so unique products. Items that stood out were the jewelry, furs, and really good knock-off handbags – all very much outside of our budget.  Since the place was so crowded with tourists and the shopkeepers were very aggressive, we felt overwhelmed after an hour of perusing and ended up doing most of our shopping at the smaller bazaar and a standalone shop that we found a few blocks from our hotel.

After Istanbul we were off to central Turkey – to Cappadocia for cave exploring and hot air balloon rides!