One of the most important moments in US history was Star Wars. And yes, we do mean the movie, and not the Reagan initiative to protect us from nuclear ballistic missiles. Before it, a flash light was still a flash light, Big Foot was just a mythical creature who had no earthly explanation, and US dominance was still questionable. Thank god for George Lucas; a flash light in the hands of a small child became a light-saber, Big Foot had a brother in Chewbacca, and no one would ever question that Hollywood wasn’t the dominant force in movie making. Since everyone reading this blog (except Valerie) has seen Star Wars (if you haven’t, queue it up in Netflix stat) it will be easy for you to picture Cappadocia, as it was the land of the sand-people.

Cappadocia has an incredibly rich history and is an ancient part of civilization, settled around 300 AD, where up until the latter half of the 20th century, the peoples who inhabited it still lived in caves carved into the soft rock throughout the vast valleys. It is also one of the top spots in the world for taking a hot air balloon ride. The story goes that this beautiful land was the result of a trifecta of volcanoes erupting, in combination with a subsequent melting of a vast amount of ice. The deluge of water carved deep valleys into the existing ridges and left a rather unique landscape behind. In addition to these valleys with sumptuous curves, there are many three-story rock structures jutting up abruptly out of otherwise smooth surfaces. Val described the scene best as something you may have created on a microscopic scale if you ever went to the beach and let a handful of wet sand drip into cone-like formations. 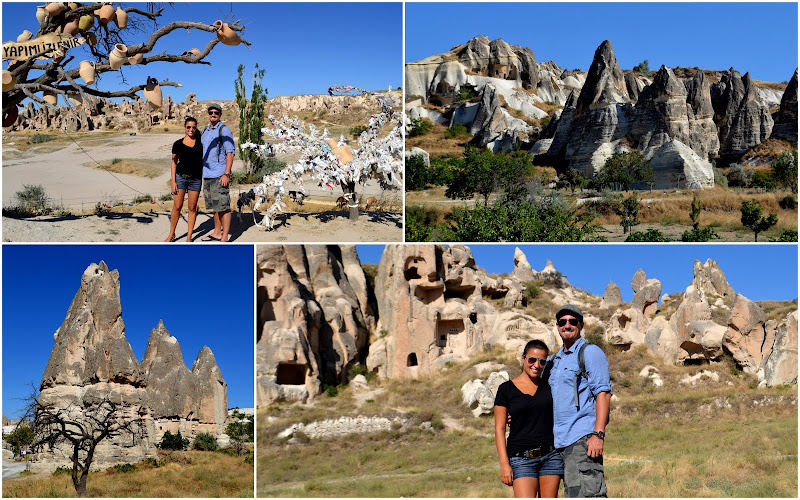 We based ourselves in Goreme, one of the five villages in the area. It’s centrally located to all of the valleys, is known for being easy to navigate on foot, and most of the balloon operators operate from there. We opted to stay in one of the cave hotels for a more authentic feel. It was very roomy and looked basically like a hollowed out cave room with a bed, dresser, and desk. Since the walls are natural rock, the room doesn’t need any air conditioning, but it does get a little moist and damp smelling. The town has long since evolved from its cave dwelling glory days and there are plenty of modern restaurants, cafes, and shops.

After eating breakfast on the rooftop of our building, which overlooked the unique-looking town below, we set out to adventure.  We took a stroll through the little town and stopping in at various artisan shops, we had a delicious lunch of kofte and lentil soup at Café Safak. This place was recommended as a great lunch spot and the best place for coffee. The sign out front boasted that Ali (the owner) had completed a barista course in Melbourne! We didn’t sample the coffee, so we can’t vouch for it, but the food was delicious! You can see Ali’s mom in the kitchen making everything fresh and her lentil soup has even won competitions. With our bellies full, we ventured out on our first hike to the Goreme Open Air Museum. The landscape never ceases being awe-inspiring with every formation having its own unique characteristics. The museum was cool because you get to go inside of the caves and see the remains of the murals inside the old churches. 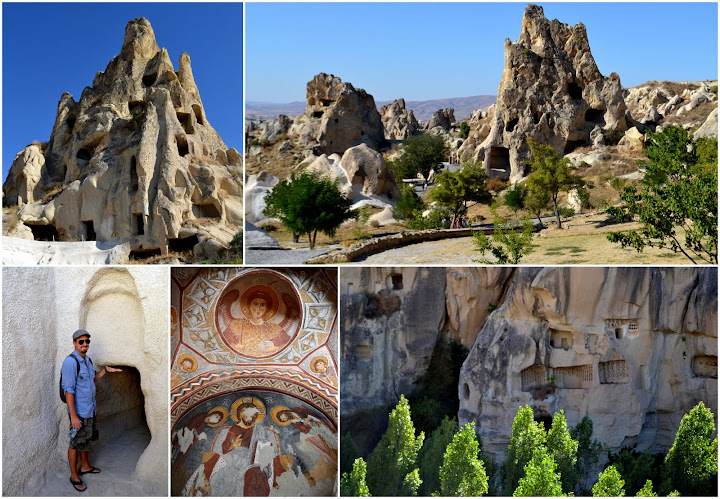 We hit the sack early that night since we had to wake up at 4:30 am (!!) the next morning to go on our hot air balloon ride, followed by a four hour tour of the nearby towns and valleys. The hot air balloon ride turned out to be one of the highlights of our trip so far. It’s not a cheap activity – costs 150 euros per person – but it is 100% worth it. There are many balloon operators and you have to choose carefully to make sure you pick one with licensed pilots. We went with Butterfly Balloons and couldn’t recommend them highly enough. Our pilot was Mustafa, who was a big joker and kept us laughing the whole time. The whole crew was very professional and they even gifted us with a bottle of prosecco at the end since we are honeymooners! Val likes to pull that card out as much as possible.

They pick you up from your hotel and drive you to their offices for a light breakfast. By light they mean essentially non existent (coffee, fruit, bread) so if you are a big breakfast person you are out of luck.  Afterwards you are driven to the balloon take-off site and get to watch the whole process of getting the balloon ready. They use a large fan to inflate the balloon and then blow hot air into it to get it to rise so that the basket can stand upright. Once everyone gets into the basket, the pilot fires up the flame again and off you go floating into the sky!! 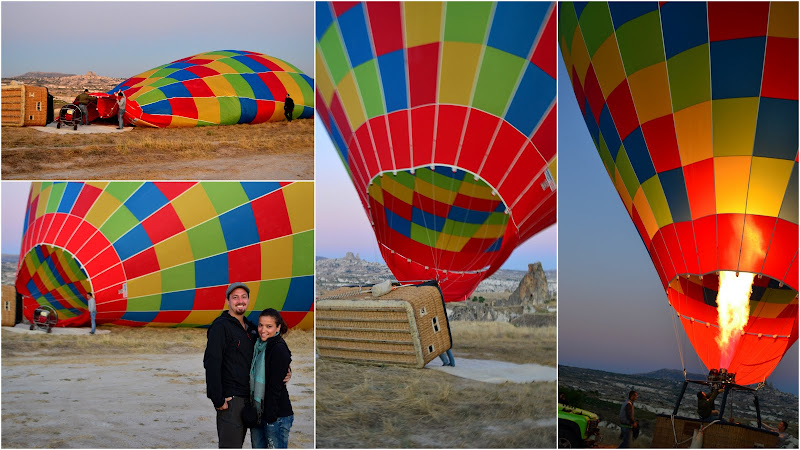 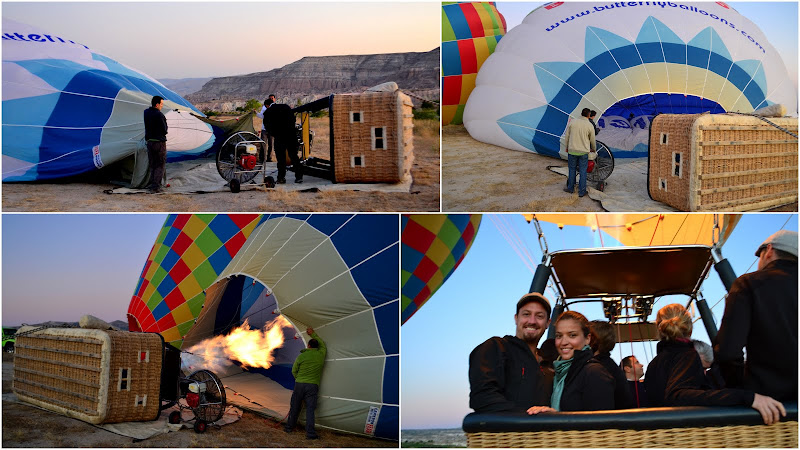 The beauty is indescribable…really, we can’t even begin to put it into words. There is so much to take in all at once – the sun rising over the horizon, seeing that many balloons floating all at once, how small the town looks below you, the amazing shapes the valleys take on from above. We could go on and on – it was an incredible hour and we are so lucky that we got to have that experience. Here’s a small sampling of what we saw, there are many more photos in our Picasa album (you can access it from the photos tab at the top of this page) – 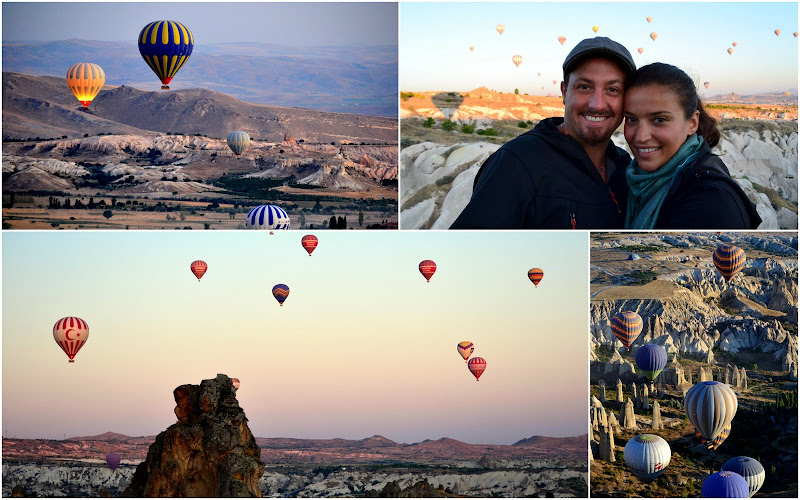 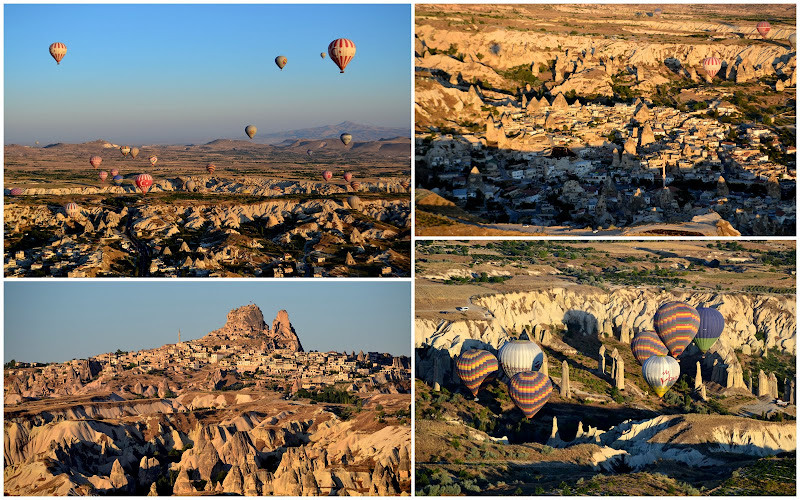 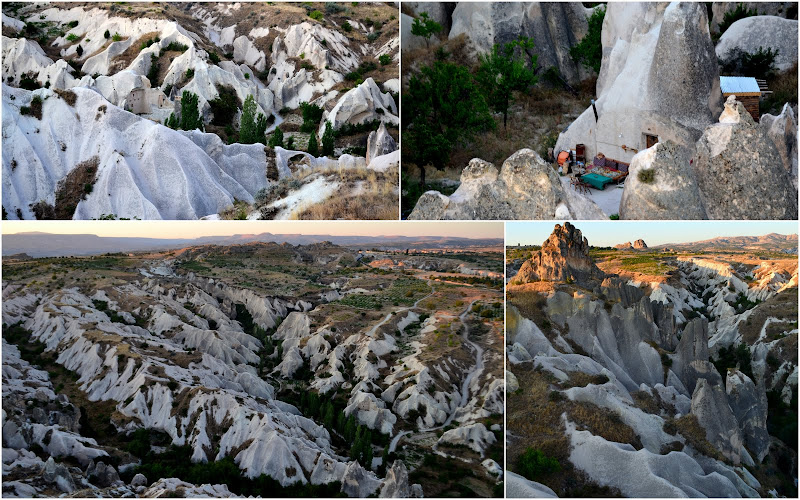 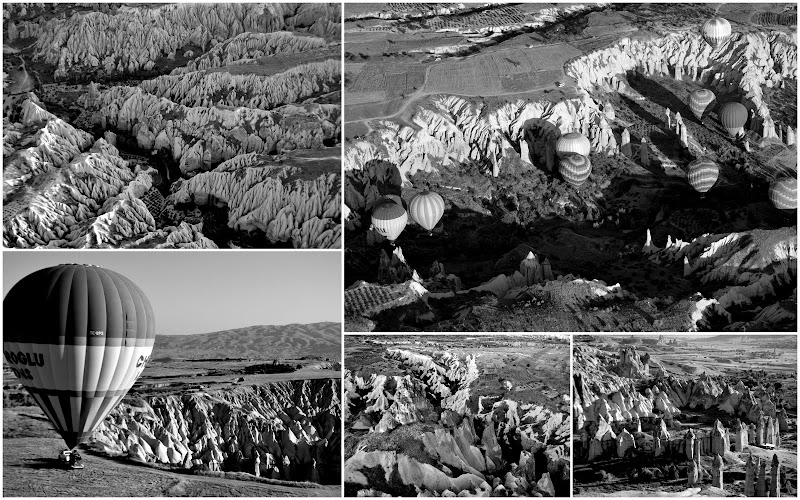 After returning back to our hotel, we had some more breakfast and met up with two more couples to take a guided tour of the greater Cappodocia area. The two couples were also staying at our hotel – Vince and Jessica from San Franciso and Eli and Sarah from Portland or Seattle. They were our age, so it was a lot of fun to hangout together all day. Our tour included a visit to one of the original caravan shelters, climbing through former cave homes, a couple of valley hikes and a trip to a true underground city. 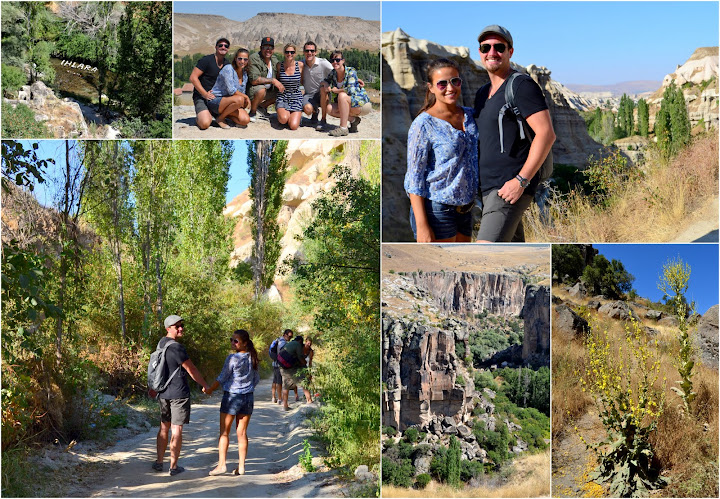 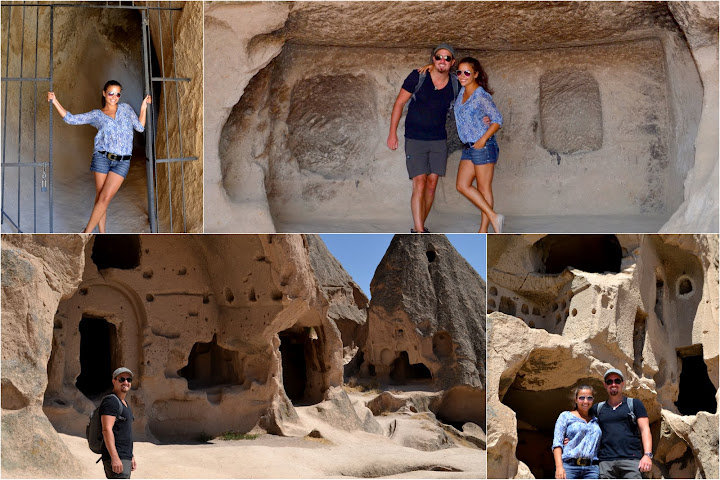 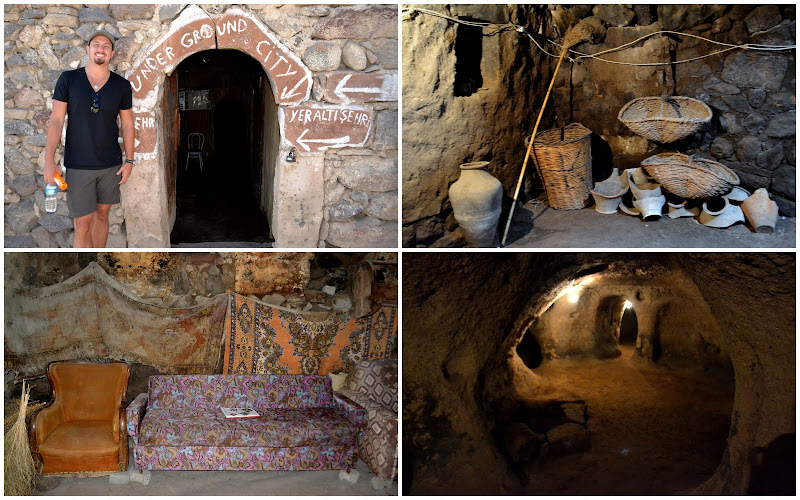 Maybe the best part of the guided tour was learning about the region from our knowledgeable guide. The caravan shelters were placed about every 50km along the path that stretched from Beijing all the way to Venice. Our guide was also the one to point out the connection to Star Wars and the geological history of the region. The real eye opener though was the underground cities. They are massive and according to the guide, all of the towns are interconnected, with some connecting tunnels running as far was 70km in distance. The excavation is typically 30m below the surface, but each little town was fully equipped with hidden ventilation shafts and underground wells for water. One of the coolest parts was to see the huge round granite stones which acted as the locking doors to keep out intruders. Essentially a big wheel with a hole in the middle, these massive rocks would be rolled into place and to defend them arrows would be shot at the enemy via the hole in the middle. Simple, but genius – don’t really even know if you could break through them today in spite of all our gadgetry. Not like you can blow them up and risk being caved in on. We also learned that when the cities were created, the region did not look the same. The valleys which are now desert-like (think Star Wars) once had a full range of wild animals (lions, tigers, bears, oh my!) and vegetation abound. The animals were pivotal in helping to remove all the dirt from the tunnels and transport it many miles away to the dumping quarries. Moving the earth far away from the town was essential so that you could not be found by invaders.

Cappadocia is an amazing place, such unique surroundings and some of the nicest people we’ve met thus far. We hope that you’ll put this city high on your bucket list of places to visit! After Cappadocia, we flew back to Istanbul for a day before heading to Croatia and had another travel mishap 😦 but that is a story for another post!!

p.s. a special thanks to our friend, Alina, who recommended that we add Cappadocia to our Turkey itinerary!