Let me tell you a story about two tweedles…..

Once upon a time, say Septmeber 7th or so, in a far away land, maybe Istanbul, there were two tweedles, Tweedle Dee and Tweedle Dum, and these two tweedles were on a long journey to explore the world. On this fabled day of the tweedles adventure, almost 100 days away from home, the tweedles were supposed to be seasoned travellers. They were supposed to have long put behind them such tweedle behavior as showing up at the incorrect airport for a flight or missing a flight because they failed to double check a reservation. For these tweedles were practical tweedles, tweedles who valued their hard earned paper-with-big-heads, and tweedles who took pride in not exhibiting idiotic tweedle like behavior.

This particular day was amazing uneventful, all the tweedles had to do the entire day was to make a flight at 8:00pm. You see, the tweedles were simply resting for a day before they continued their journey further east to the fabled sea fairing land of Croatia. To make this even easier on themselves the tweedles had booked a room at the hotel attached the airport and after they landed they only had to walk a mere 500m to their resting spot. This way the tweedles had a good nights rest before their uneventful day.

So the story goes that the next day the tweedles awoke and spent the afternoon squatting in the lobby of the hotel, since they had to check out of the room, roaming the internet and planning the next week of their great adventure.

As the sun started to set it signaled to the tweedles that they needed to pack up their stuff and wander over to the airport to catch their flight and be on their merry way. So they loaded up their packs and set off. Having only made it 25ft or so the tweedles noticed the hotel, being attached to the airport, had a departure board so they looked for their flight…….scanning, scanning, scanning….then it hits them both.

These are two of the dumbest motherfucking tweedles ever – they were supposed to arrive and rest at one airport and transfer during the day to the other. Instead they sat all day in uncomfortable chairs, doing nothing, and as a result pissed away more money. Dumb motherfucking tweedles, really how can two tweedles be so dumb.

It should be evident that we are the tweedles in the story and yes after paying a kings ransom for a cab to the ‘other’ airport once before and having to buy a last minute ticket for missing a flight because we didn’t review or reservations once before – we miraculously combined the two errors into our biggest fuck-up to date. WE SAT ON AN UNCOMFORTABLE COUCH ALL DAY INSTEAD OF DOING THE ONLY THING WE HAD TO DO – GET TO THE OTHER AIRPORT ON TIME.

The good thing was that our brain-fart was so absurd, to commit both prior offenses in one felt swoop, that we couldn’t even process its magnitude in order to get upset. It was really like being in shock after a nearby explosion.

After the shock wears off we decide to head to the airport next door, the wrong airport, and speak with a ticket agent there as we felt a live person would be better then trying to net this out over the phone.

So we approach the Turkish Airlines lady at the counter and explain our situation, we are to miss our flight and need the next flight that going to Croatia. She goes to work, fingers a flurry, and then reports back that the next flight is on Sunday.

The problem with Sunday is that it is not Saturday, it was Thursday. Now the F-bombs are exploding inside Chris’ head as we are supposed to be on a chartered boat on Saturday. No more shock, just pure shame, self hatred and overall unhappiness.

This of course turns out to be bullshit, after 972 key strokes the lady seemingly just picked a day of the week. While Chris’ upset mode was blasting off, Val’s bullshit radar picked up a bogie at twelve a clock and thus we decided to search on our own.

Now we needed to connect to the internet which is not small thing in Istanbul. It is free, but only for people with a Turkish phone. You see, you have to receive a SMS from the website with the authorization code. Luckily, the lady at the counter couldn’t operate her machine worth a crap, but she had a cell phone she let us use to get a code.

It took us all of three seconds to pull up Kayak and have a list of available flights to get us there next day. This of course included one from Turkish Airlines, which we pointed out to the lady and to which she basically responded “guess you should book online”.

Luckily this airport had a entire section for overnighter’s so we were in good company and because we got there early we claimed a double bench each to call a bed.

Let’s just say it wasn’t the best nights sleep the tweedles have got on the trip. 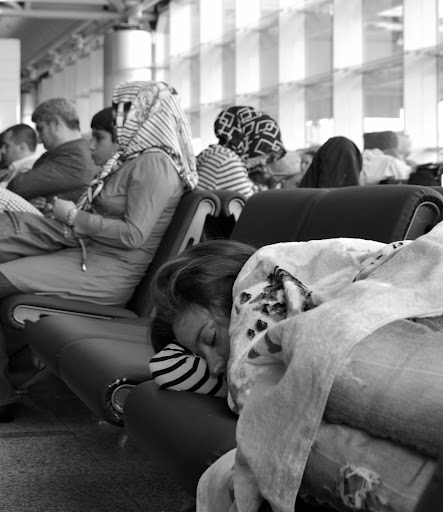 Extra Bonus: While wandering around the terminal Chris was able take this picture of a picture…..isn’t it a cool photo? 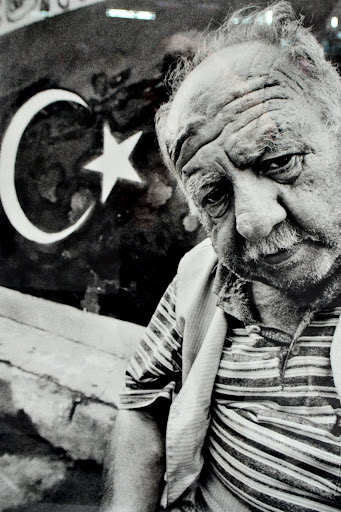