The title is no play on words. The name of the gulet (small wooden yacht) we embarked to sail up the Adriatic Sea was indeed the Black Pearl. Unfortunately, our captain was not a rum drunk Johnny Depp character, but a character in his own right with kids who happen to love the ‘Pirates of the Caribbean’ movies.

We last left off with the Tweedles sleeping off their idiocy in the Istanbul airport awaiting a flight into Croatia. The story resumes with us landing in Dubrovnik and taking a bus into town. We were originally meant to arrive a couple days early to check out Dubrovnik and to ensure we made the boat even if something stupid happened. That move paid off, since we did indeed do something stupid, so instead of two days to explore Dubrovnik, we now only had one morning. 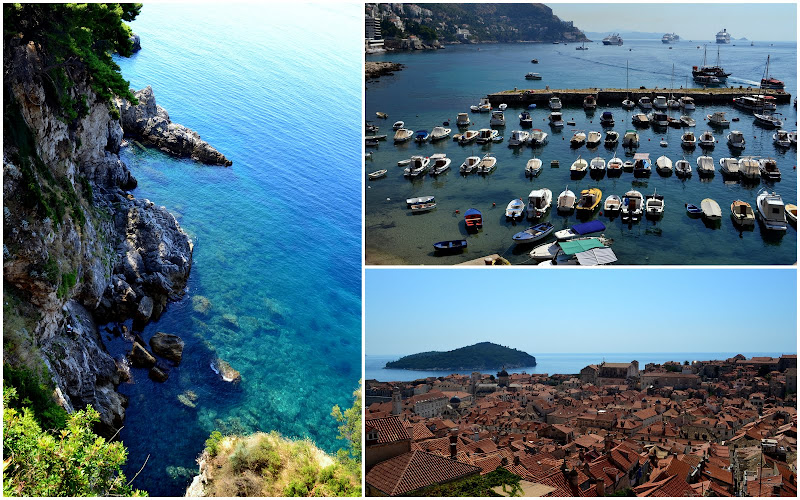 From the bus stop, we walked to our apartment/hotel property where we were greeted by Ivo, the apartment owner. He gave us some tips on how to enjoy his beautiful city. As a traveler’s aside, it appears that Croatia has an above average number of entrepreneurs who rent out privately owned apartments to make a living. While most apartment rentals in other cities are facilitated by using vrbo or airbnb, we found both our unit in Dubrovnik and later in Split on hotels.com. Both of the units were centrally located and professionally run. Considering they come at a discount to the bigger hotels we advise that you don’t shy away from them if you ever make it to this part of the world.

The old city of Dubrovnik is entirely enclosed by a robust set of castle walls. Comparatively speaking, it has to have been one of the most secure towns during war times as this wall is much more impressive then any we have seen elsewhere. As you can guess, the main attraction of Dubrovnik is the caste walls and viewing the city via a stroll from a top. Dubrovnik is a port town on the southern part of Croatia’s Adriatic sea side. As the city has expanded it has been forced to build a bigger marina a couple kilometers down the way, resulting in less boat activity to view from the castle walls. These days the stroll is more about appreciating the size and scale of the wall and observing the catacomb of streets and buildings below. Dubrovnik is a fun town, but one you can certainly enjoy in a single day. 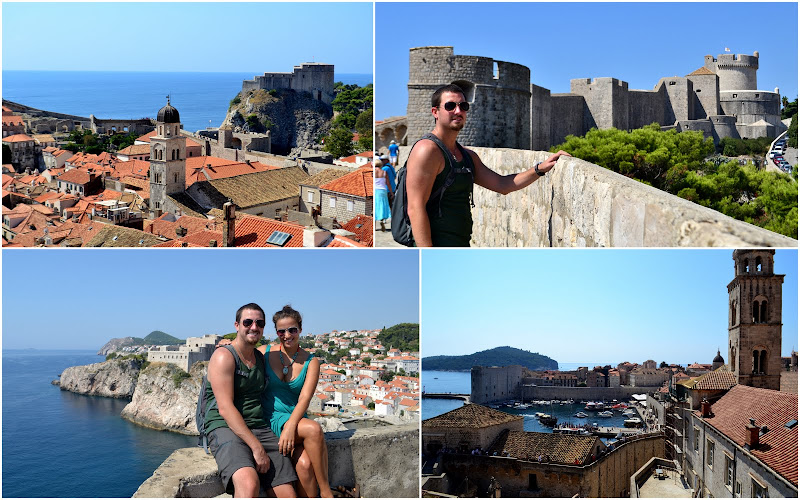 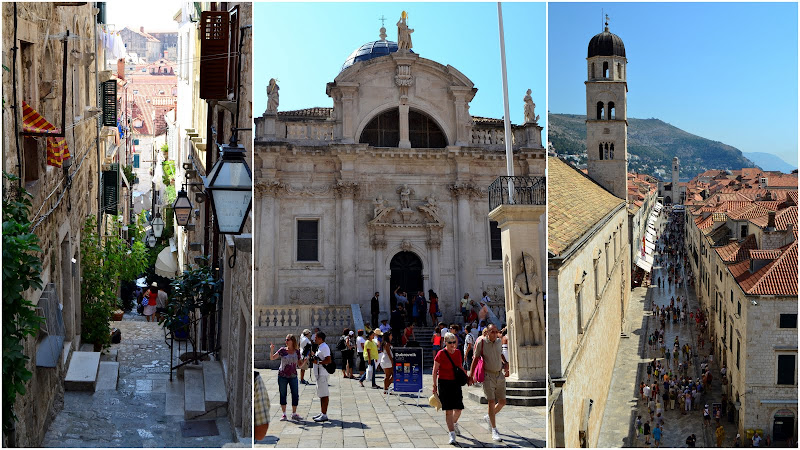 After our morning exploration of the old city, we headed back to gather our luggage and set off to find our boat and set sail. Of course it was not as simple as it should have been…a fitting start to our week-long adventure. The charter company simply tells you to be at the port and look for the boat at your scheduled embarkation time. We are guessing this system works fine in cities which have only one port, but in cities with both an old and new port and where the new port is massive it can be a little confusing. We essentially walked an extra couple miles with our packs because we kept getting conflicting information.

Once on board we had the pleasure of meeting the other couple along with us for the week long adventure and our captain. Our new friends Digby and Leonie were on holiday from South Africa and our captain was Croatian, but also spent considerable time in London. In order to fill out the crew we had to wait for our chef and two additional crew who were also coming along for the journey.

Here is a rundown of who we shared our gulet ride with.

Captain Ducien – A Jeykll & Hyde type of guy who is always friendly to the guests, but switches to his mean alter ego at times when speaking to the rest of the crew in Croatian. As mentioned above, he splits time between Croatia and London as he traffics cars from the UK to Croatia in the off season. He was early to rise and often first to bed. His wife and small child joined the journey about half way through. Did you know that baby talk is essentially the same in Croatia as it is in English?

Chef Neven – A massive individual. Easily the biggest Croatian we saw in the close to two weeks we were there. He was gregarious, extremely worldly, and an awesome chef – stews, stir frys, fish grills and even Mexican. Neven was an Opera singer in a prior life and continues to stay active in the music business. At present he owns a couple gulets and operates his own sailing company. We highly recommend booking directly with him if you decide sailing the Adriatic is for you – just reach out and we would be happy to give you his details. Without him the trip would not have been the same.

The Girls Sarah & Vonda- Something like Mary Ann and Ginger from the SS Minnow. Sarah was very outgoing and fun loving. She was the constant focus of Ducien who liked to pick on her bubbly nature and she kept the trip interesting. She helped Neven out a lot in serving us our meals and washing the dishes. Vonda was a lot more reserved, it felt like it was multiple days before we heard her speak. They both came along for the sun-tanning and site-seeing in exchange for helping as part-time crew.

Digby & Leonie – In South Africa our fellow guests are geologists, which lent itself to many a question and answer session. They were a worldly couple experiencing the Adriatic for the first time. We shared many a meal both on and off the boat and were thankful to have them on the trip else it may have got a little boring. We all lounged like professionals and read many books in between cities. With our combined efforts we even managed to complete a crossword puzzle.

So back to the sailing experience. The first thing we experienced and didn’t realize at time of booking, was that it is common for boats to sit in the port of embarkation the first night. Since both couples had already spent time exploring Dubrovnik we spent the night having drinks on deck and getting to know each other. Not like we could have left though as Neven and the girls didn’t even make it to the boat until well after the sun had set. They had a long, traffic-ridden drive to Dubrovnik and had to do a massive food shopping trip.

To describe a typical day at sea: our boat would wake up fairly late (9:00am or so) and would start the day with breakfast and a quick swim in the sea. Breakfast was delicious – eggs any which way you wanted them, sausage, yogurt, tomato/mozzarella, fresh fruit, etc. We would then set sail for four or five hours to reach the next port town. The sailing is slow and steady, but that’s a bit misleading to say as we didn’t use our sails at all and instead motored along at a leisurely pace. This is prime sunbathing time, nestle into a nook with a book and enjoy the passing scenery in relaxation. 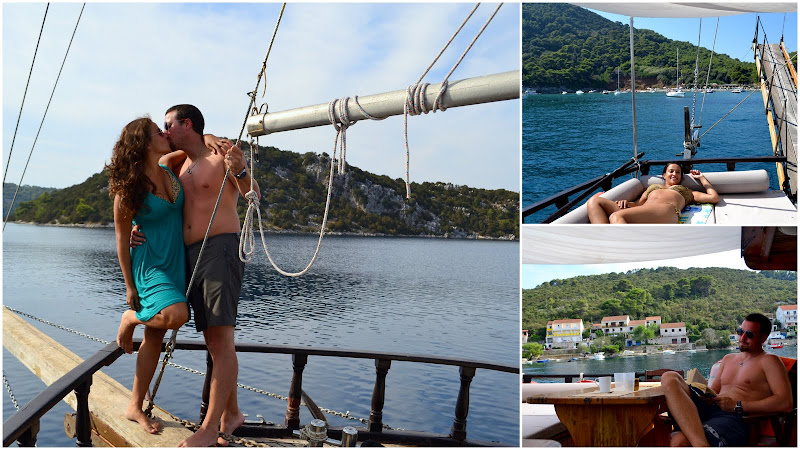 Once at the port, guests and crew would tender into the towns for a stroll around. We made a couple stops at some small towns which we cant quite remember the name of, but the major ports were: Mjlet – national park, Hvar – bigger party town with proper Italian-esque square, & Korchula – nice quaint mid-size port town with a castle and plenty of great shops and restaurants abound. Hvar was our favorite stop, it was just a cool little town. Mjlet National Park sounded like a good time, but it was really kinda uneventful. Korchula was certainly a town to visit, but just not as cool as Hvar. 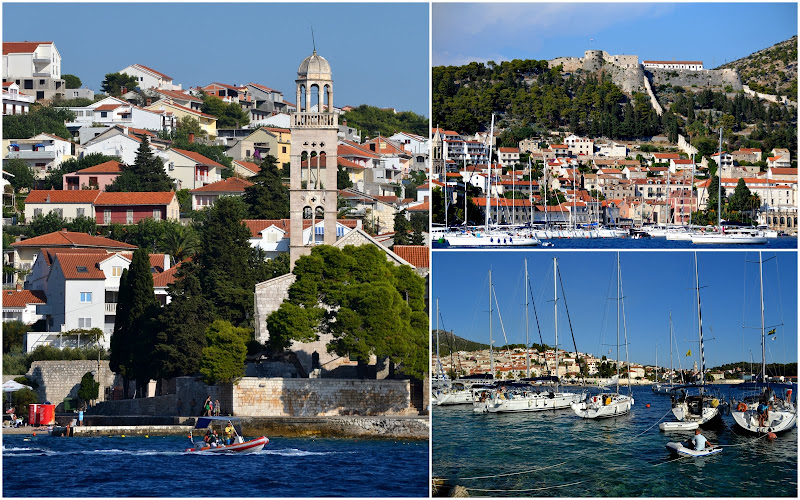 The sea is some of the cleanest and most clear water in all the world. Neven explained that this is because the natural currents wash all the impurities south and dump them on the eastern shore of Italy. For this reason the Croatian coast has long been prized and it contains some of the most expensive real estate in the world. We also saw some of the most gorgeous sunsets in this region! 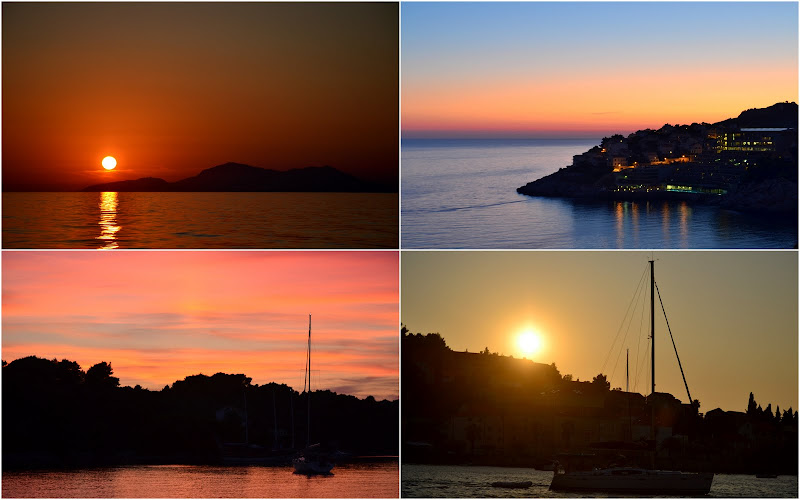 The real fun for the week was sharing meals with Leonie and Digby and learning about the life of a geologist and life in South Africa. We peppered them with everything from their thoughts on Pangaea to specifics about the mining industry. 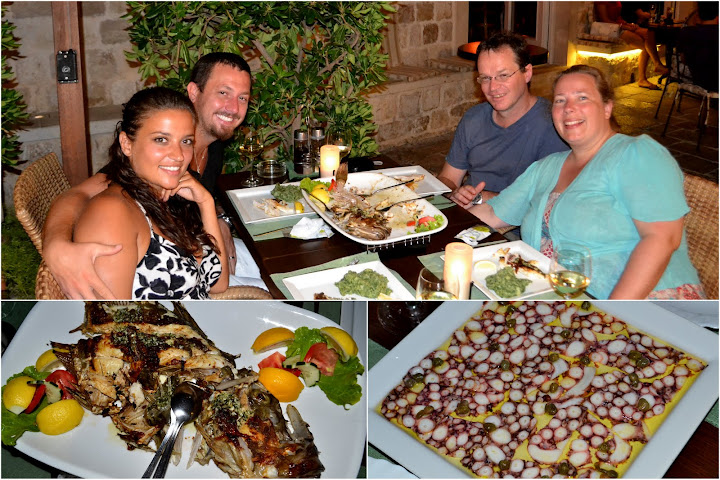 The dynamic of our crew was also a hot topic of discussion. The captain of the boat was certainly a colorful character to say the least. At one point he boasted that he doesn’t hit his women, as if that was an admirable trait. Couldn’t help but think of the Chris Rock comedy show where he talks about his friend bragging that his best attribute is that he never went to jail – if you have seen it, this was that type of moment, but speaking up to point out his flaw in logic was not going to happen as Ducien was a little animated at the time. To say the least, he was the king of his boat and often backed up that position by yelling angrily at Neven and Sarah. It would have been more awkward if we understood what he was saying, but this was one instance in which not understanding the language was a positive.

Neven was also quite entertaining. Over the course of the trip he sang us an opera, showed us how to cook and make mojitos, and explained to us the woes of life in Croatia. Some of the more memorable learning experiences were his views on the Serbian – Kosovo conflict and the stigmatizing effect of TV on a society. He pointed out that all societies change when TV becomes a part of the culture. Essentially life slows down and people produce less kids. In essence, TV is the anti-sex. Interesting hypothesis – makes sense to us. This parallels to the Serbian – Kosovo conflict because the Serbians outnumbered the Albanians in the beginning but because they were a more developed society, one with TV, the Albanian population, without TV, grew to eventually overtake them. Neven’s phrasing of this tactic was classic, he said the saying in Croatia is that “the Albanian’s beat them with there dicks.” Classic Neven – a little history with a little laughter. As we stated above he was a true professional and a great host for the ship.

We discovered on this adventure that we are indeed small boat people. When we first boarded and spent the night in the Dubrovnik marina we were questioning if we would enjoy the week, but once we set sail the next morning we quickly saw the beauty of this type of vacation. Croatia has some of the best coastal waters we have seen and we highly recommend this type of trip as a change of pace to cruise ship sailing. 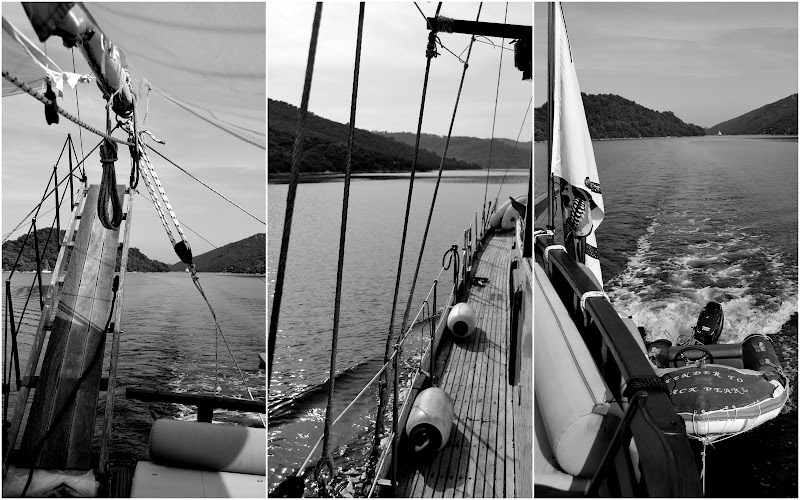 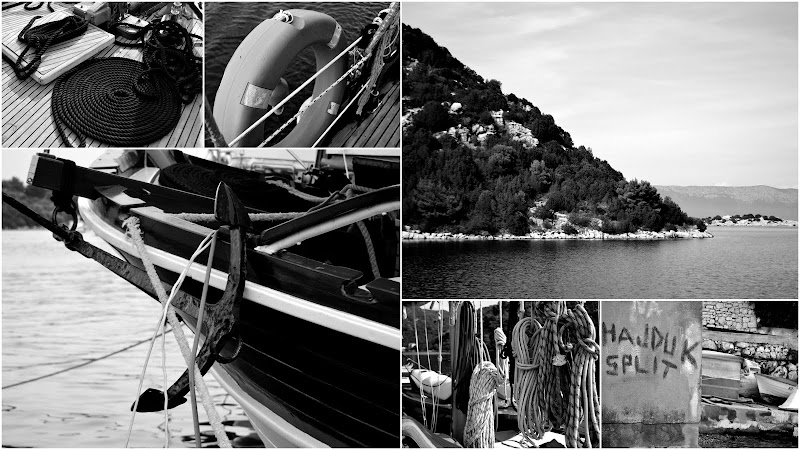 We will save our adventures in Split for our next post!