We originally didn’t have London on our itinerary because Chris has frequented there (and Watford) for work several times in the past few years and Val had been with girlfriends while in college. With our plans in limbo between heading East or West and with practically no remaining days left to spend in Schengen zone countries, we were left with little choice but to either continue sitting in Split or head to London. We opted for the latter since it would allow Chris a few days of work from his employer’s office in Watford – travel ain’t cheap, so it was a welcome opportunity to make some additional mullah!

After a long day of travel – connecting flights, bus to/from airports, cab to hotel – we finally arrived at our hotel, the Park Plaza. Located across Westminster Bridge, you get a spectacular view of Big Ben when you walk out the door. We got upgraded to a suite which was quite a nice surprise. The decor was swanky, with a huge comfy bed, so we were tempted to stay in for the night, but big city nostalgia was calling our name and we headed out for dinner and a movie. We took the tube to Covent Garden and were instantly overwhelmed by the happy hour crowd. How odd to see people our age, dressed up in work clothes, enjoying a post-work beer…that used to be us! Even though we’ve been traveling around mostly ‘large’ well-known cities, they just don’t have the same amount of people generating the amount of energy you feel in NYC or London.  We were definitely a bit overwhelmed at first, but adjusted to the familiar bustle quickly enough.

At the recommendation of our friend, Alex, we ate at Belgo Centraal and it proved to be delicious. It’s know for it’s mussels, which of course we sampled (the Thai green curry ones), but it also has great food – we ordered the salmon cakes, rotisserie chicken, and duck breast. With our bellies full, we walked over to Leicester Square to see a movie. Now, we know that going to the cinema may not be high on your list of sightseeing activities in London, but back home we were big movie-goers and it’s one of the things we miss doing being on the road, so we try to hit up the cinema whenever we get access to one! As accustomed as we were to paying $12.50/ticket back in NYC, we were surprised to find Londoners pay 14£/ticket – going to the movies is no cheap date!  We further splurged on Ben & Jerry’s and Sour Patch Kids and settled in to watch Crazy Stupid Love. It was the perfect movie – funny, charming, witty banter, Ryan Gosling’s abs…we give it two big thumbs up!

The next day (Saturday) was our only full day in London and luckily the weather was perfect, so we spent much of it just walking about, enjoying the onset of fall, people watching, and sightseeing. We walked across Westminster Bridge (lovely view of Big Ben and the Eye of London), swung past Buckingham Palace (lotsa tourists and pretty gardens), and then cut through Hyde Park (beautiful, but we still prefer Central Park) to reach Portobello Market (massive and crowded, but at least the wares were more original than the mass produced chotchkis we’ve been seeing in other markets). 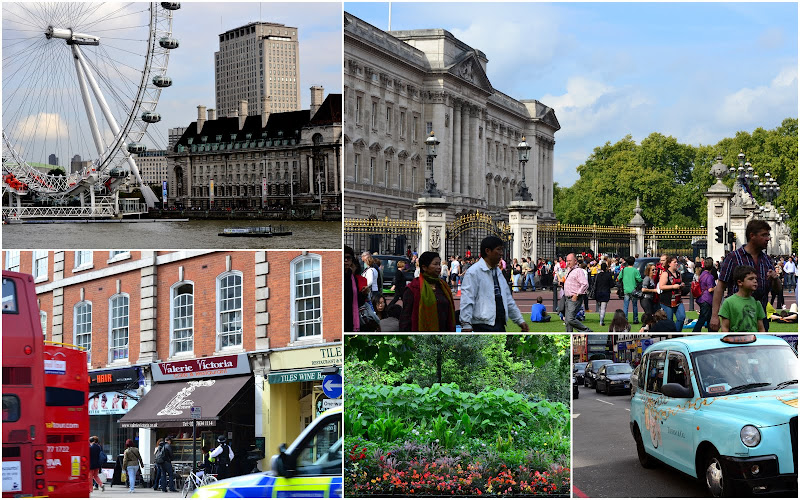 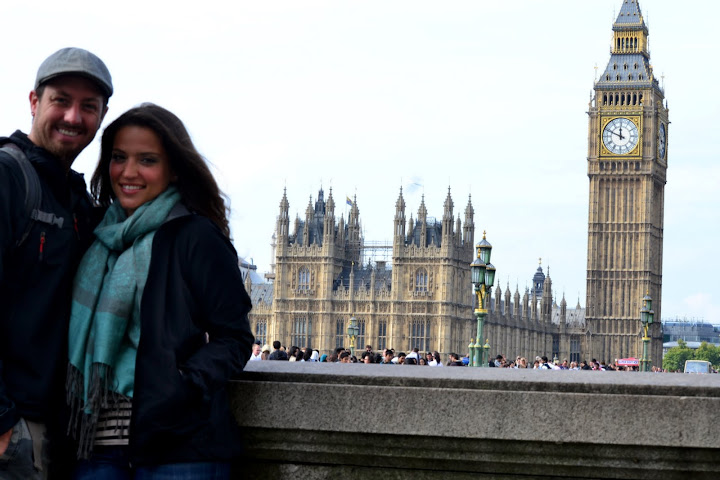 Since we enjoyed Ryan Gosling’s work so much the night before, we decided to head back to the cineplex that evening to watch his other movie, Driven. It couldn’t have been more of a 180 – an 80’s inspired, slow paced drama about a stunt driver (who is a get-a-way driver on the side) that goes on a killing spree to protect his next door neighbor love interest. Save your monies and see Crazy Stupid Love instead.

The movie got out kinda late and the post midnight crowd around Leicester Square was interesting to say least. Drunk hipsters, drunk sluttily-dressed girls, people sloppily making out, boisterous too-tight-shirt-wearing guys slurring pick up lines…we could go on and on. Maybe it’s because we haven’t been clubbing in awhile, but what some of these girls were wearing was just plain awful – who let them outta the house dressed that way?!?! And for the sake of all things good and sane, what is with the pantyhose under super short, tight shorts trend?! We really wish we’d taken photos, but just trust us, it was nogoodverybadsimplyawful.

For our last day in London, we soaked up every last minute possible in our hotel suite before check out time since comfy mattresses have been few and far in between. We ate lunch at Wahaca, which claims to be London’s best Mexican restaurant. It was quite delicious and was the best Mexican we’ve eaten on this trip so far,  but Rosa Mexicana still holds the #1 spot in our hearts. We walked off our burrito bellies with a stroll thru Piccadilly Circus, up Reagent Street to Oxford Circle. Window shopping can be a little cruel when you haven’t got a good excuse to buy anything! On our way back to the hotel, we almost lost our lunch when a gaggle of teenagers, straight out of ‘My Big Fat Gypsy Wedding’ got on board our train. O.M.G. where to begin…it was fast and furious because they got off the train about as quickly as they got on – it was apparantly too hot for them, but it was just long enough to permantely scar our brains. They looked like teen-size versions of the little girls from Toddlers and Tiaras – pancake makeup applied with no skill and hair that had been gelled and then curled to look like perfect, plastic spiral curls. But that wasn’t the worst of it…they were sporting low-rise, skinny jeans and 3-inch wide tube tops. There were about 5-6 of them and when they rushed onto the train, we were sitting, so what really caught our attention was that one of them had the double batter muffin top so prominently displayed and only then did our eyes travel up to take in the full picture. Oh how we wish we could unsee all that we saw!

After a wonderful, but brief, stop in London, we made our way to Watford which is about a half hour train ride north. It looks a bit like mid-sized town you’d find in Connecticut, lots of brick buildings housing business offices and a Main St. with pubs and shops. Most importantly, they had recently added a Pret a Manger! A fun reminder of home, since we used to grab lunch from there several times a week back when we were full-time working folk. We spent Monday and Tuesday working from Chris’ employer’s office. To be more honest, Chris worked and Val just sat in one of the conference rooms doing research for our itinerary for the following few weeks in southeast Asia.

For our last night, Chris’ co-worker, Debi, invited us to her house for dinner. Debi and her husband, Andy, live in nearby village with their two adorable little girls. The village looks like a quintessential, picturesque English village and they have a beautiful brick home that was built in the very early 1900’s. Their daughters were apparently very excited to have real, live Americans come over because they love all the Disney tweener programming and are constantly practicing their American accents. It was so funny to us that they found us ‘exotic’ sounding – nobody ever gets excited about an American in their midst! They were adorable and even asked us if we pronounce ‘coffee’ with a NY accent, like ‘cwuafee’ – haha!

It was a blast of a night to say the least – we had so much fun hanging out with them and the evening just flew by! Before we knew it, Debi and Val had gone thru three bottles of wine and Chris and Andy had imbibed between 8-10 beers each. It was 12:30 am and we had to get up 6:00 am to head to the airport. Debi, Andy – many thanks for the booze, food, books, and great company – hope we get to hang with you two again soon!

And so ends our long weekend in England! Next up is Bangkok and our journey to Laos….stay tuned 🙂