**Unfortunately, our little camera with photos of Laos was lost/stolen, so we only have a couple of photos of our time there 😦 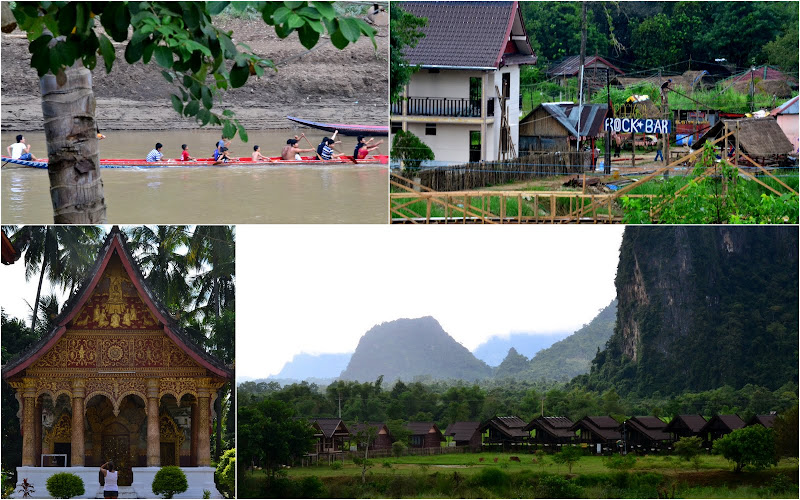 Hopping into a tuk-tuk at the border crossing between Thailand and Laos, we had no clue what to expect of our first stop – Vientiane. To be honest, we had not done a lot of research on any of our village destinations, outside of a cursory search for a hotel in the center of town and a quick browsing of the top ten ‘things to do’ on Trip Advisor. We had however put some bookends on what a village in this part of the world looked like from our brief time exploring Bangkok and then observing the countryside villages from our overnight train. It goes without saying that we were hoping to be closer the Bangkok side of the scale.

Vientiane is the capital of Laos, so it was far from rural, but it was a fairly small sized city compared to other capital cities that we’ve visited. The streets were aligned in a grid system and the roads were particularly wide for the levels of traffic we experienced. On the main street there was a mix of high rise office buildings and single story shops. The high-rises look to have been built up over the last 25 years, and similar to Bangkok, no one seemed to care about the maintenance of the properties. As is most everywhere in the world, all the nicest buildings belong to the banks. The more prestigious of those building were constructed recently, as they had all glass facades. Though, even those properties were in a state of disrepair at the ground level.

The main attractions of the town were a large arch and fountain in the center of the town and several markets – neither were all that impressive. The food, however, was spectacular. After countless overpriced tourist meals in Europe, it was refreshing to sit down and eat some quality stir fry and drink a couple of beers for less than ten dollars. It is so cheap and so good, you feel like eating all day when you first arrive. The highlight of the culinary experience was a restaurant called Makphet in which the village kids participate in the cooking as a community outreach program. The food here definitely leaned more towards traditional vs. the more westernized version that some other restaurants served.

Our next stop in Laos was a much smaller village called Vang Vieng. To get there, you hop a bus or minivan and it takes about 5 hrs since it is not exactly highway travel. We had opted for the minivan by chance and later learned that is the safer way to travel as the big buses have trouble with the hairpin turns – think IRT Deadliest Roads.

While not the most comfortable way to travel – 12 people jammed in a minivan – the ride was some of the best site seeing on the trip. We had long heard from Val’s sister that Laos was a “majestic” place. After the first two days, we agreed that a copy of the Oxford English Dictionary was in order as a Christmas/Chanukkah gift, as we had not seen anything even close to that definition. That bus ride on day three gave some credence to her choice of description. The roads trek up and down the mountains and the views of the lush green forest and rolling valleys were something to behold. Equally intriguing were the villages nestled between the roads and the cliff edges. It’s rather daunting to imagine living so remotely and the poverty is incredibly sad to witness.

There is not a lot to be said about Vang Vieng. We mostly used the town as a one night stay over to break up the long drive from Vientiane to Luang Prabang. The main attraction of the village is a robust tubing industry, but one look at the murky brown waters of the Maekong river and it was clear that was not for us. Outside of that singular attraction it is simply a collection of guesthouses and restaurants lining a couple of city blocks. Unlike Vientienne, it has no other purpose outside of tourism and as such the average person walking the streets is from one of the English colonies. Because of its small size and cheap living, many a college kid hang out here for endless days, watch ‘Friends’ and philosophize about a plethora of topics they know jack shit about. The highlight of this part of the trip was sitting in a Aussie-run bar, eating and drinking on the cheap while it rained cats, dogs, tigers, bears and elephants around us.

The next day we hopped another minivan to trek up to Luang Phrabang – about halfway through that adventure we came upon this scene. 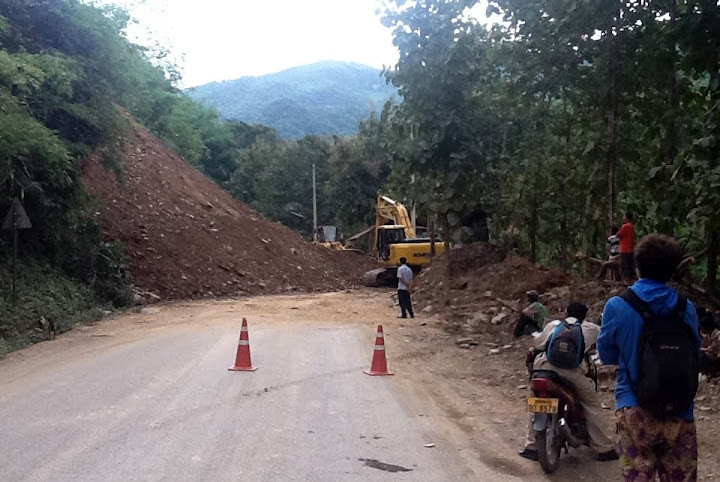 That is a mudslide which is blocking the entire mountainside road. How long do you think it took to clear that out of the way??? If this were to happen back in the States, it would take hours, if not days. Keep in mind, we are in Laos, a hundred miles from the nearest major town. Twenty minutes! Yup, you read that correctly. In the middle of nowhere they mobilized a couple of excavators and pushed the dirt out of the way before we could even become restless. Simply amazing! They cant fill pot holes or build better dwellings then ten stick huts, but they can clear a mudslide in under a half hour – something is terribly backwards in this place.

Luang Phrabang is by far the best of the towns in Laos that we visited. It is a beautiful tourist town, very French-colonial inspired, with a proper main street lined with shops and hotels. It also has a host of local companies offering adventure treks and day trips to the surrounding waterfalls. At night the main strip is converted into a night market filled with all sorts of foods and textiles. We ate some amazing food (cheap), got massages (cheap), toured some gorgeous wats (temples), observed the monk parades and enjoyed the sights along the rivers which surround the town. If we were to return to Laos we would make LPB our base of operations as it had the most to offer.