No visit to Siem Reap, or Cambodia for that matter, would be complete without a visit to the ancient temples of Angkor. 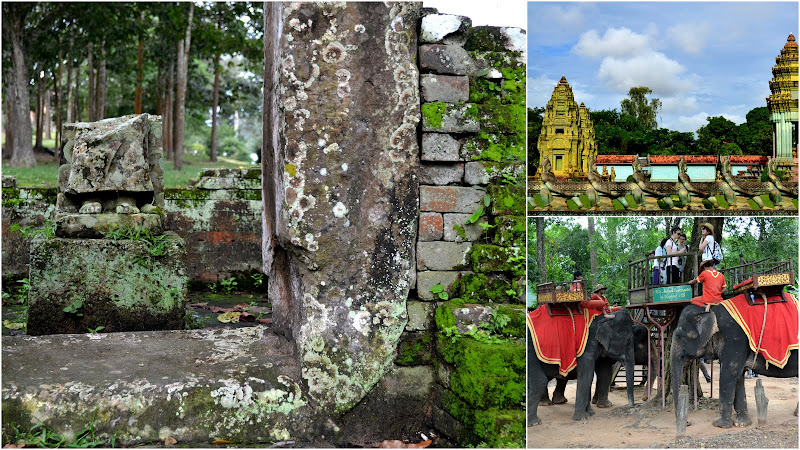 Similar to the famed Louvre in Paris, people talk about how one needs multiple days to view them, but in our opinion, in order for either to be true, you would have to revel in observing the most obscure and subtle changes. One thing this trip has confirmed for us about each other is that we both comfortably reside on the other end of the human spectrum when it comes to musing.

There are three options to doing a tour of the temples; (i) rent bikes and guide yourself, (ii) hire a tuk-tuk ($7 for the day) or a car ($20 for the day) and pseudo guide yourself or (iii) hire a tuk-tuk or car and a personal guide. I am sure you can negotiate down the price, but our guide cost $30 for the day and was well worth his fee. Lastly, you have to decide if you want the ‘sunrise’ option which will tack on an additional $3 to the tuk-tuk driver and $5 to the guide.

We skipped on the car and opted for the tuk-tuk with guide and the sunrise option. We set our alarm for 4:35 am, so that we’d be ready to meet up with our guide promptly at 4:45 am in the lobby of the hotel.

Odd…why is there a circus clown ringing his trike bell in the middle of the mall?

Oh SHIT! (Chris springs up out of bed to answer the phone)

I am sure this happens 7 out of 8 times to the guide, which is why he builds in a 15 minute cushion to his scheduled meeting time. Dreary eyed, we arrive at the most famed of the temples, Angkor Wat, for some iconoclastic sunrise shots. We shuffle through the crowds and set up in a prime spot – at an angle so you can catch the recognizable skyline shot with a reflection in the moat out front. To bad you can’t pay extra to guarantee the clouds will part and the damn sun will actually rise after you schlep your arse out of bed before the crack of dawn. None the less, here are our ‘sunrise’ photos. 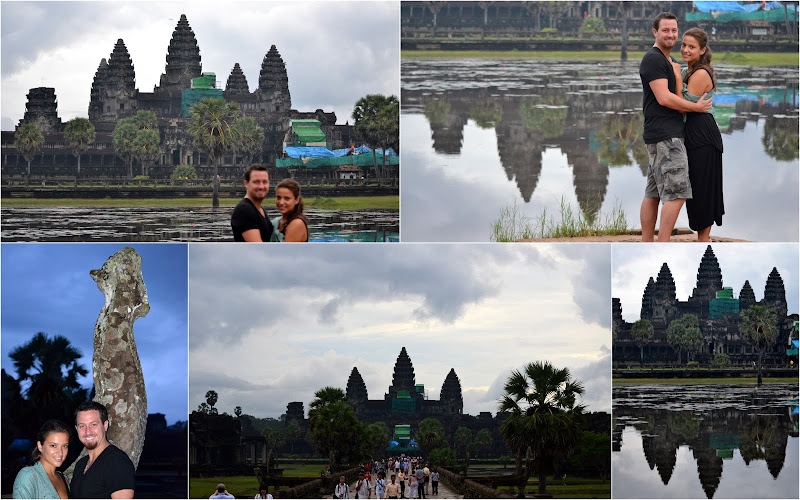 Ironically, the next stop on the tour, after not getting to see the sunrise, is to return to the hotel. Since Angkor Wat doesn’t actually open for another hour and a half and 99% of the hotels include breakfast in their price, this lag in time allows you to double back for your freebie breakfast, and if you are uber quick, sneak in an hour’s worth of Zzz’s.

There are something close to 50 temples in the region with the primary group being about 25 minutes outside of town and another clustering of them another 45 minutes up the road. 5 months into sightseeing and knowing our tolerance for redundancy, we agree on a plan to spend our day seeing the big, famous temples close to town. Therefore, we will see Angkor Wat, Angkor Thom and for lack of its official name the ‘Tomb Raider’ temple.

As we dazzle you with our pictures, we will give you our observations of the day: 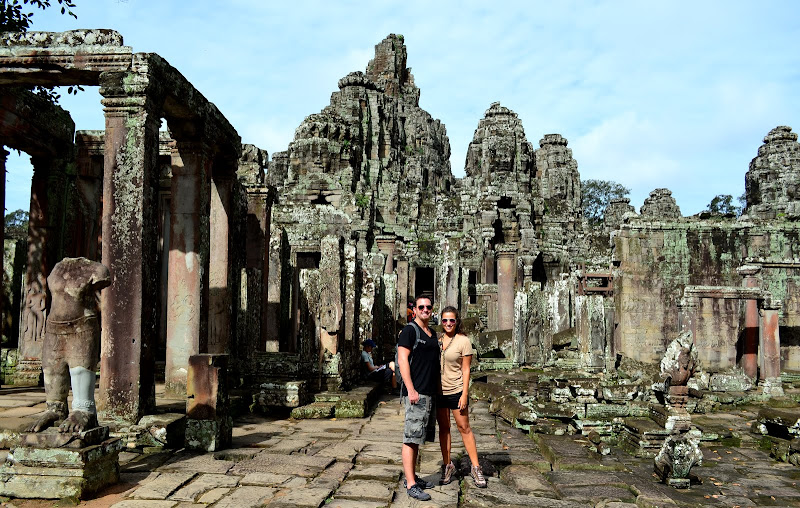 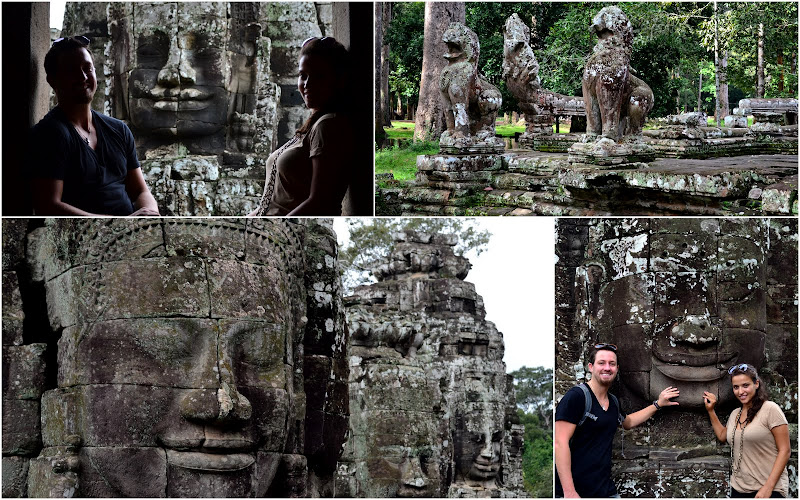 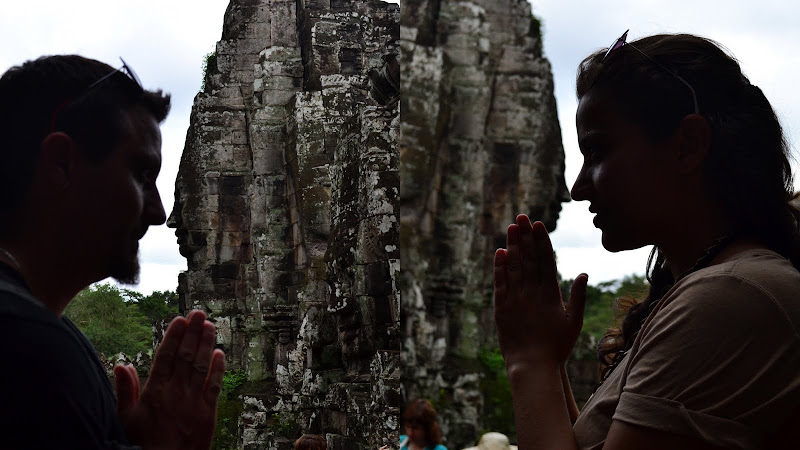 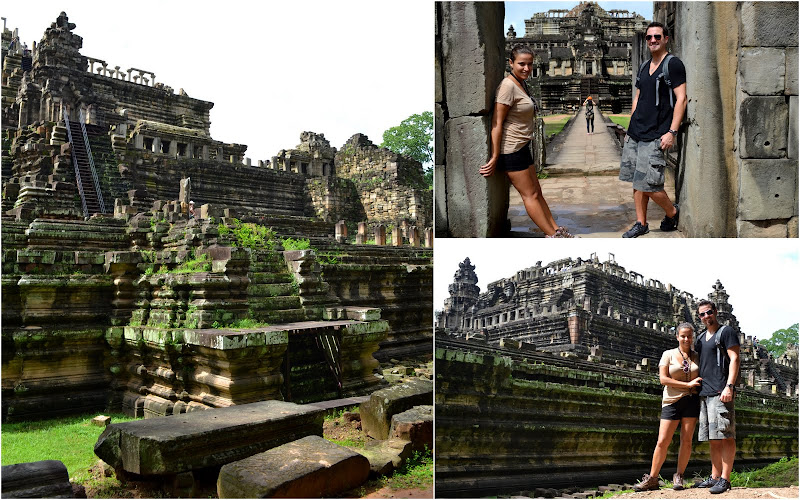 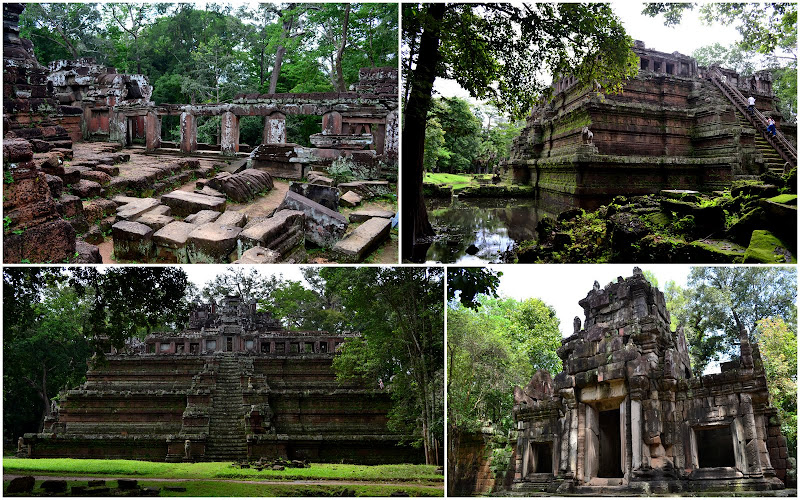 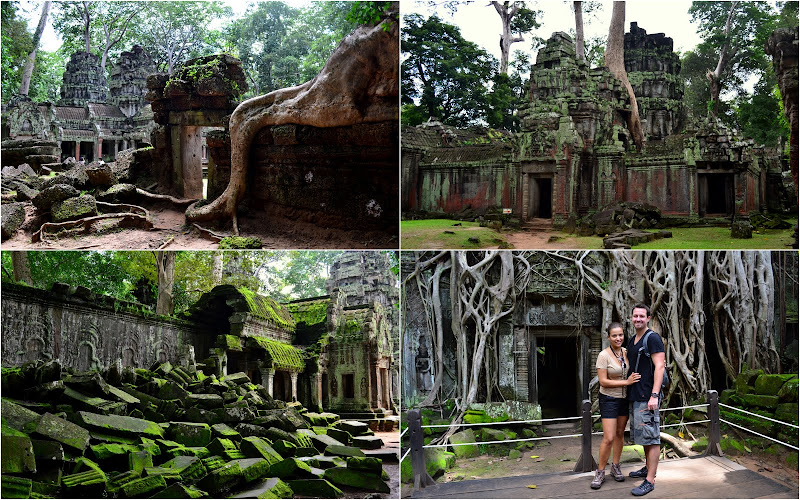 The entrance to Angkor Thom – you’ll see this depicted in many of the paintings that are being sold in the day/night markets. 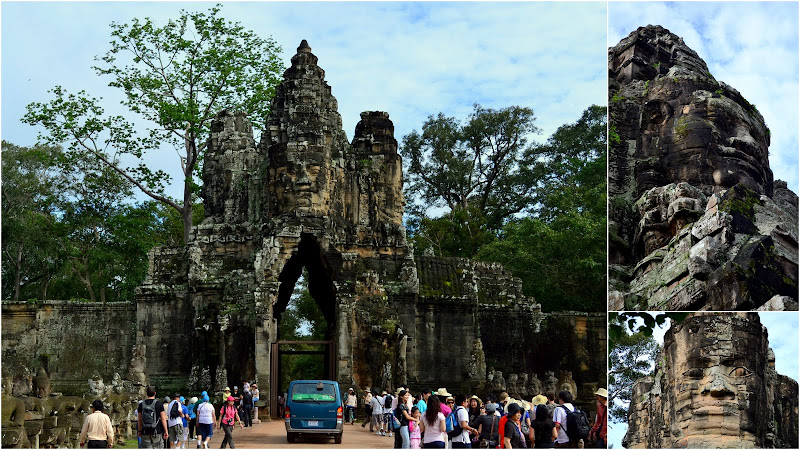 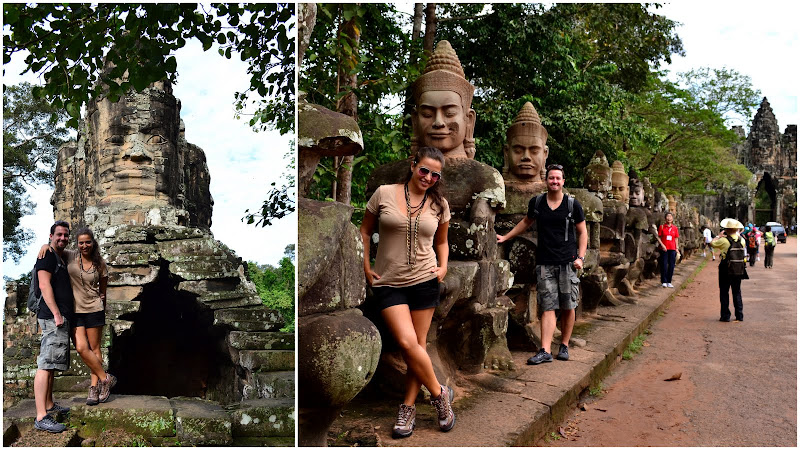 The temples are covered in amazing reliefs and carvings that tell the stories of their ancient civilizations from the wars they fought to the role of animals to how they worshiped the gods. 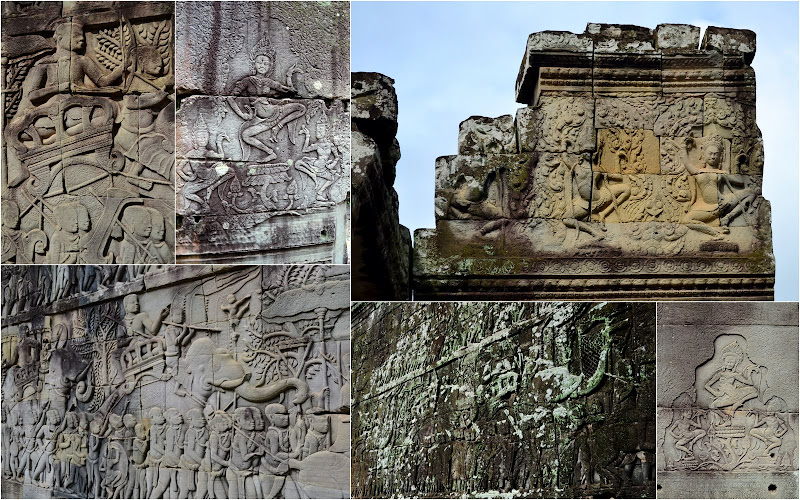 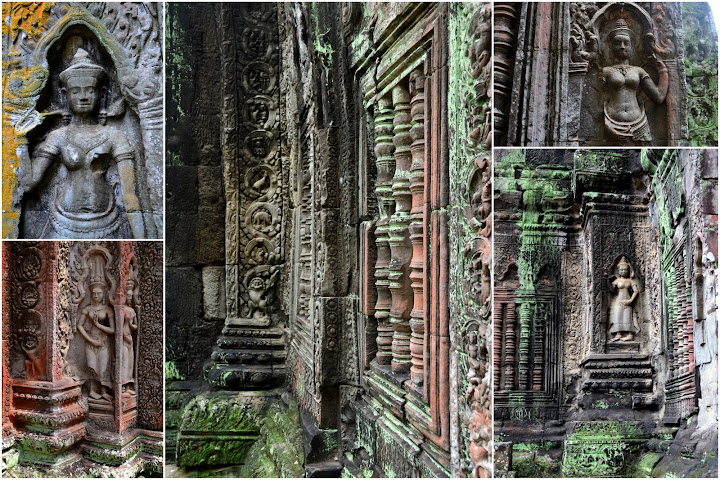 The trees are GINORMOUS and the surrounding land is incredibly lush and beautiful. 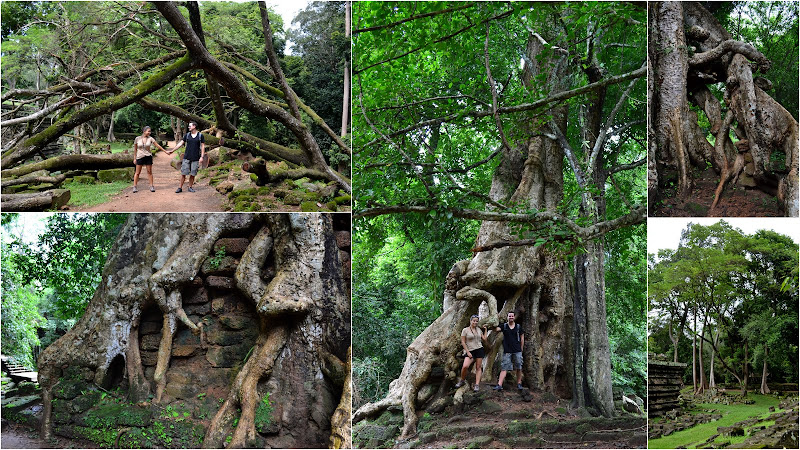 Terrace of the Elephants and cooling down and hydrating with some coconut water! 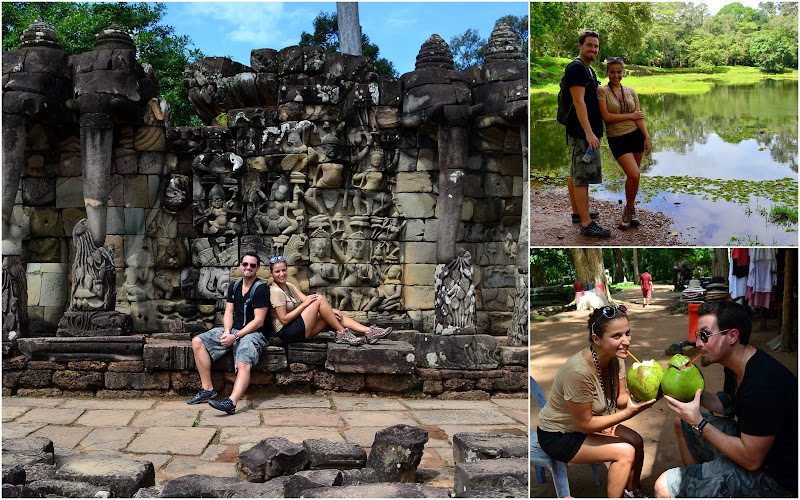 Our last stop of the day…back to Angkor Wat to tour the inside of the temple. We were pretty darn exhausted by this point, soaked with sweat, and it was starting to rain. We were supposed to stay and stake out a spot to watch the sunset over Angkor Wat, but we decided to call it a day early! 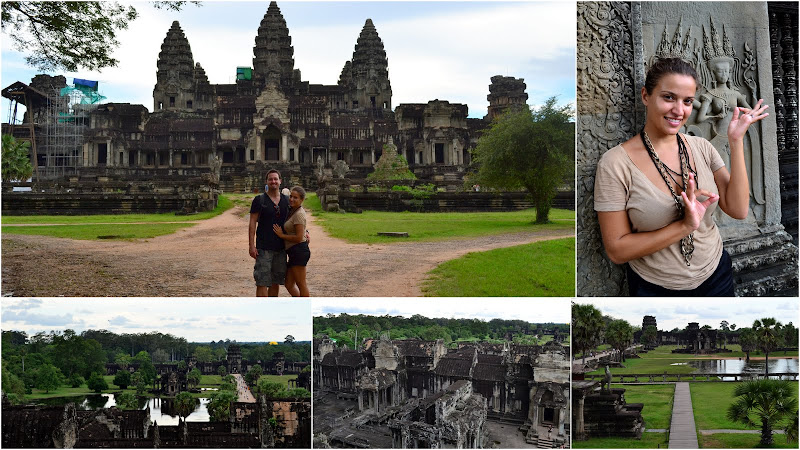 The temples were certainly a marvel to see and we knocked out the main three in thorough fashion in about 6 hrs (not including sunrise or lunch). Our guide was either shocked or offended when we told him we wanted to call it quits early and skip the remaining 4 hrs of activities he had planned. We suspect it was because he didn’t want to give us a refund – which we had no intention of asking for. Really who complains about getting out of work a couple hours early??

In closing, we’ll leave you with a few cool facts about the temples: