With a slogan like that, one would think that Japan would be in some state of eternal summer – sunny and warm all year round. Sooo not the case in December. While the sun continued to rise and rise early each day, it did not conform to our ‘chasing the sun’ vacation plans.

While the winter season meant we were destined to freeze on the outside, at least we could bask in the warmth of being around family. For this leg of the trip, we were being joined by both Val’s mother and grandfather. They had both dreamed of visiting Japan for many years and jumped at the opportunity to join us in this distant land. 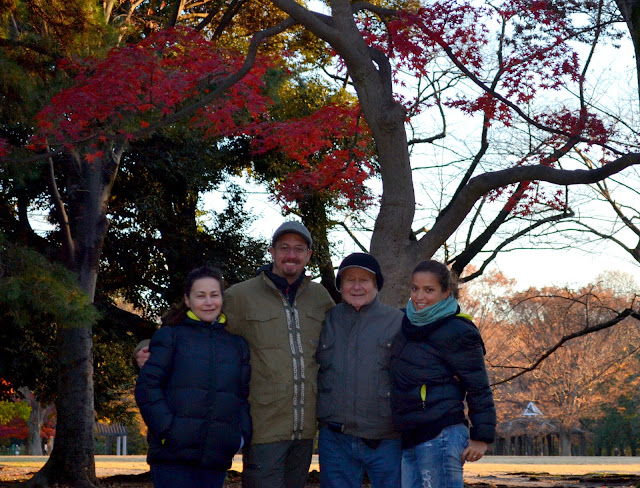 The itinerary for the week was to split our time between Tokyo and the Kyoto/Osaka regions of the main island. In this post we’ll stick to the planning and general thoughts on the region. We’ll get to the particulars of those great cities in our next post(s).

On more than one occasion, we have been asked what this trip has taught us. One of the most profound lessons is just how distorted a picture the standard US centric map of the world leaves in ones mind. It is understandable that a map maker would accentuate the region of focus by increasing its scale, while at the same time keeping the rest of the world whole by fitting in all the other pieces around it. That being said, we don’t remember it being properly disclosed as we looked upon those maps that the world was not being accurately represented. Does anyone else remember that disclaimer placed anywhere on the map? Didn’t the maps have scales, implying accuracy with regards to linear distances?

So when we went to plan our week in Japan, I figured we would be able to see it all with time to spare in our 7 day allotment. After all, it was seemingly the size of Connecticut on the map(s). Well that isn’t quite the case and even if it was, the next snafu you hit is one of cost. The original plan was to hit Tokyo, Kyoto/Osaka, Hiroshima and to visit an island like Okinawa. Of course, the latter was picked because of the Karate Kid movies, Hiroshima for its historical context, and Tokyo/Osaka/Kyoto as that is where the people are. To do that kind of trip from the States, you are talking at least a $4,000 budget and you’d need at least two weeks of travel time. That wasn’t in the cards for us, as we didn’t have the time or the financial commitment. So we had to stick to the big three on the main island and cram our adventures into a shortened schedule.

Little did Val and I realize, that the second issue – cramming in all the stuff, was not going to be a problem. As a matter of background, Val and myself are what I will coin ‘casual travelers’ – we like to visit a city or region by targeting the couple of attractions which make it unique and then spend the rest of our time relaxing amongst the exotic settings and absorbing the culture via there cuisine. In contrast to that model, Val’s mother and grandfather are what I will coin ‘aggressive travelers’ – they want to attack a city with an all day assault, sampling every nook and cranny they can get into for as long as the day can provide them tempered weather conditions and sunlight. Their prevailing logic being that they didn’t travel such a great distance to sit around and not explore. Since we considered ourselves honored to have their company on the trip, we adopted their travel style for this leg of the journey. After only one week, it was very humbling to realize that our elders are more fit then we are and that we are lucky to be of such similar traveling personalities.

Now for the general state of Japan:

Freezing Cold in December: Joked about it above, but it really was colder than we had initially anticipated. If we ever return, outside of business, we will surely target the spring/summer months to make better use of the great parks and to be more comfortable while exploring the streets at night. The city streets are so much more vibrant and alive in the evenings as almost everyone is doing something outside of their home.

Germ-a-phobes: Maybe it is because it was the only region of the world we visited in a true winter season, but in no other city did we even see a hundredth of the amount of people wearing sanitary surgical masks when out an about for everyday life. It was like twenty percent of the population was still part of some ancient ninja society, ready to pull a white katana out of a hidden flap and defend their home at the sound of the masters kong. It was really odd to be honest. Then there was also the irony of it – all that effort to block airborne pathogens and yet not a single person had on a pair of gloves? Maybe they are trained to balance without handrails and to open doors without using handles?

No Second Language Menus: Of course it is not really NO second language menus, but certainly it was the least accommodating of all the countries we visited with regards to having an English version of the menu. Maybe the Spanish or the French rivaled them, but we didn’t notice as we could recognize enough of the romance languages? We also ran into some restaurants where the owners/operators didn’t even want to try to serve us because of the language barrier. Guess they are not big on charades – everyone else seems to know what flapping chicken wings and groaning moooos stand for and worked with us.

Expansive Cities: Suspect this is once again a result of our lack of geographical knowledge, but all three of the cities we visited were much more sprawl then we anticipated. Tokyo being like what New York would be if the Hudson and East River didn’t create such harsh divides and Kyoto and Osaka not being far behind. Whether in the city or just carrying its namesake, the airport in Osaka took a solid hour in a taxi if not more to give some sense of scale.

As for the cost, this was one of the more expensive places we visited. Disclosure: we don’t tend to look at the fluctuations in the Yen as often as we do the Euro or the Aussie dollar, so we would have no clue if this was just a temporary pinch. At the higher end of the restaurant spectrum a quality steakhouse or shabu shabu spot will easily cost $100 or more per person before alcohol consumption. Similarly, a medium-to-high end hotel costs about the same as it would in New York, which is something like 20% percent to say Chicago, Paris, or say Barcelona at the least. Lastly, taxis are a lot more expensive. On the short runs you often get charged a premium because of the ~$10 minimum. On the longer runs you are going so much further, so of course it makes complete sense that you are charged so much more. Which stings when you just want to take the quick way home.

Putting aside the cost, the time we spent in Japan was awesome. The cities glow at night and all the people out and about add a level of intense energy typically only found in small pockets within big cities. The architecture and landscapes are unique and beautiful and the people are incredibly gracious and inviting.