**Arrived on December 8th and departed for Kyoto on the 12th

We flew into Tokyo Narita Airport the evening of the 8th and waited around the airport for Grandpa who was flying in from Atlanta. Mom was flying in the next day, so the three of us spent the night at a nearby airport hotel and met her at the airport the next morning. Once all four of us were reunited, the adventure began!!

Since we took an absurd amount of photos and saw tons of places, we’re going to try a little bit of a different format to show you our time in Tokyo – here goes!!

1.) Where we stayed – Asakusa: this is located in the Taito district of Tokyo and it’s one of the few old-style neighborhoods left. We loved the traditional, authentic feel and there was lots of amazing shopping and sightseeing. 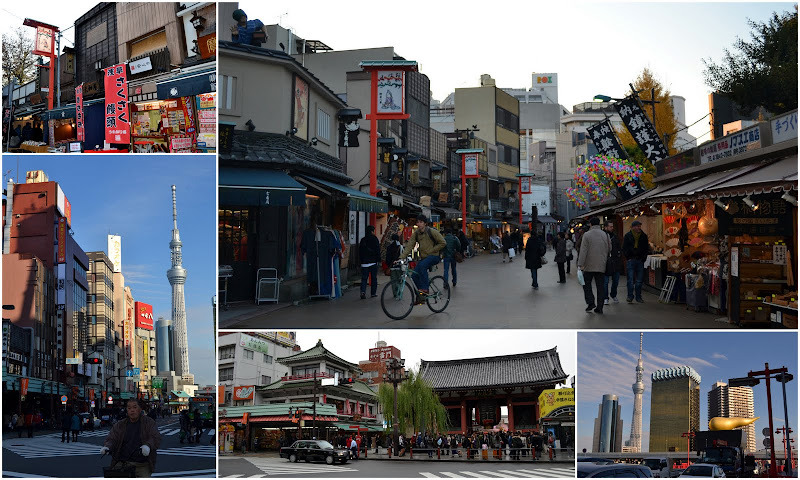 This part of town is famous for being home to the Senso-ji temple, a Buddhist temple and the oldest temple in Tokyo. Next to it is the Asakusa Shrine, which is a Shinto shrine. Can anyone tell us what the HUGE golden thing on the Asahi building is? A carrot? A tadpole? 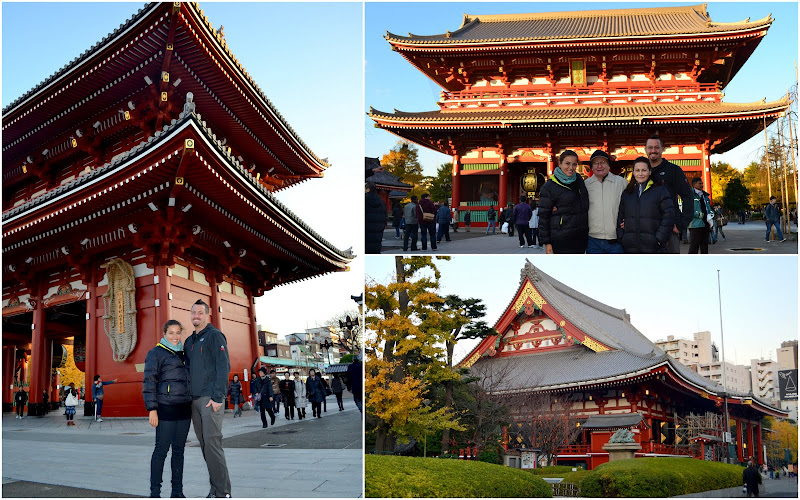 The temple and shrine are absolutely beautiful – there is so much detail and colors are so vivid. There is a lot of ritual involved in visiting, such as lighting incense and breathing in the fumes and taking a sip of water from the fountain. 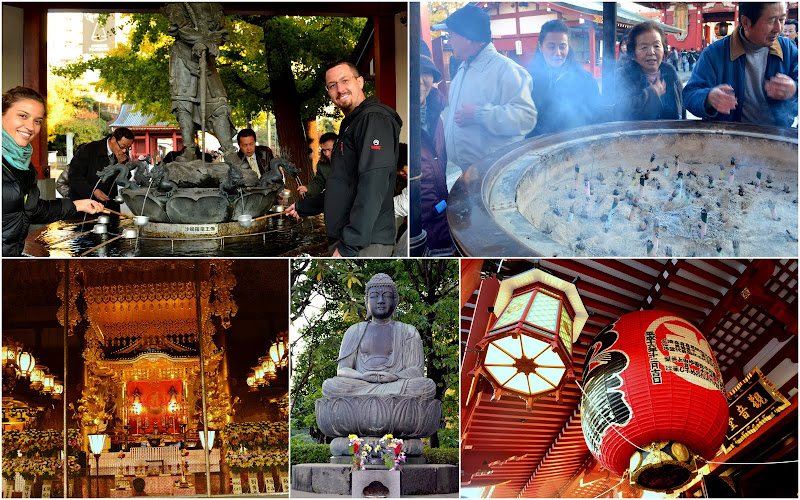 Leading up to these beautiful structures is a street called the Nakamise-dori that is full of shopping and food stands. We got a lot of souvenirs here and tried some interesting Japanese foods – the fish were filled with chocolate and the dumplings with red bean paste! The use of bean paste as a filler in pastries was uniquely Japanese. 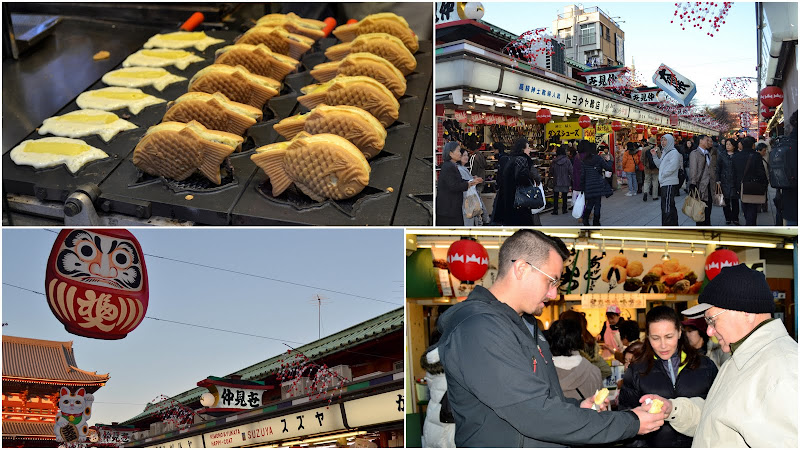 2.) Tsukiji Fish Market – we woke up at 4 am, it was FREEZING, and took a 30 minute cab over to the fish market so we could get in line for the famous tuna auction. After close to an hour of milling around the warehouses, trying to find the tuna auction location, we finally got close and were rudely shooed away by police. Apparantly the tuna auction isn’t open to visitors in December. Major bummer, but we were already up and out, so we settled for the scenery of the fish market.

In our rush to get out the door and over to the market in time for the auction that was not meant to be, we had no time for coffee, so we set out on a mission to find some. Lo and behold, we were pretty astonished to find that it’s sold at 7-Eleven, in a can! Already warm and you can choose your’s black or with cream – ingenious! 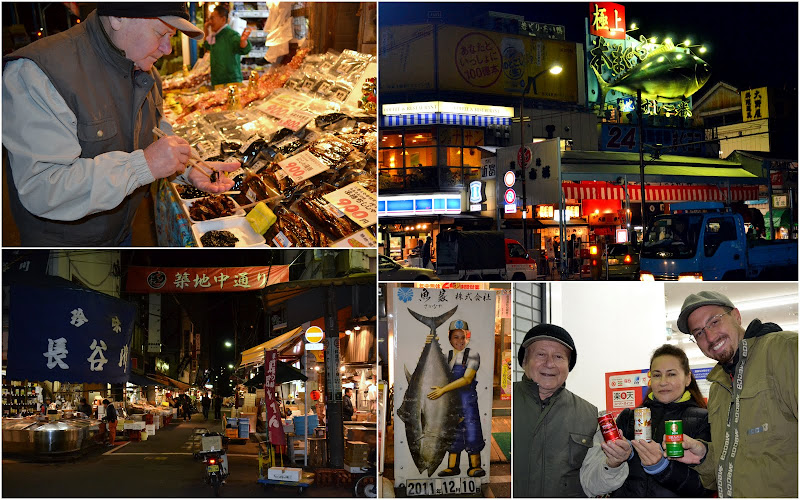 We saw fish in every state imaginable – fresh, dried, frozen, marinated, etc. A lot of the vendors put out samples of various weird goods, so Grandpa had a field day trying everything! 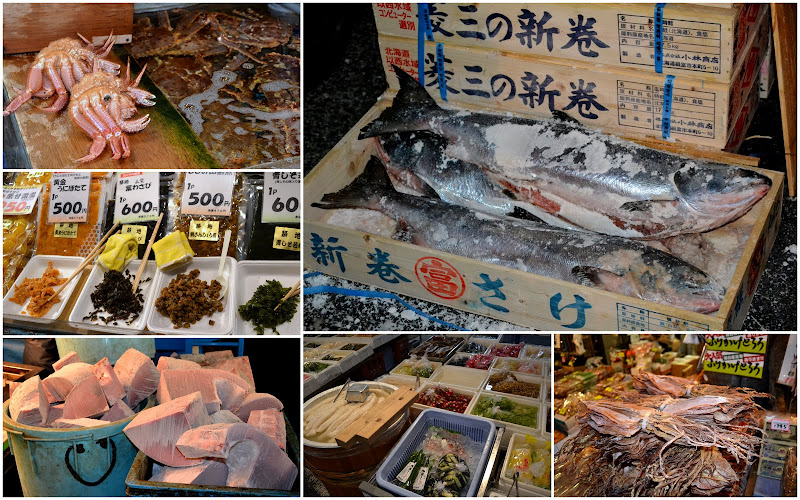 Many people advised us to eat sushi while at the market, and while we can certainly see the logic behind that, since everything is so fresh, we just couldn’t stomach raw fish at 5 a.m. Plus, since it was freezing, steaming hot ramen seemed much more appetizing – it was delicious! 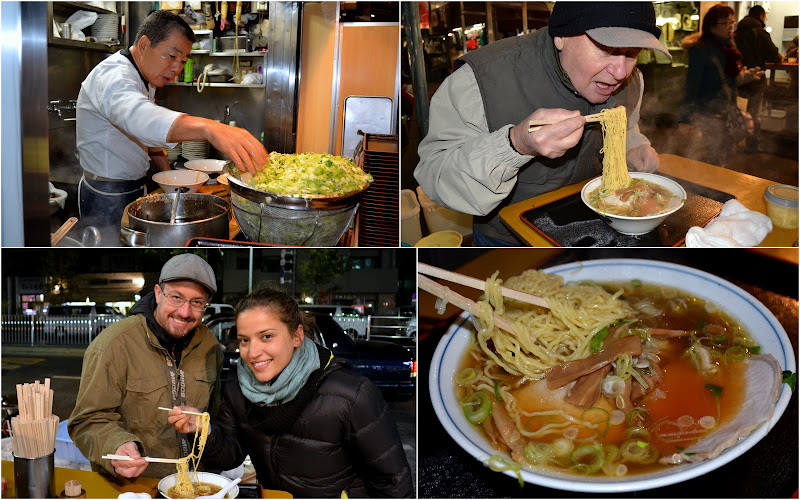 3.) Meiji Shrine & Yoyogi Park – Shabuya district – with our bellies filled with ramen, we set out on a long walk. We came upon the Yoyogi Park, which reminded us a bit of Central Park. The leaves were a gorgeous array of reds and yellows, there were bikers and runners, dogs on walks, and cheerleading teams practicing. Right next to it, is the Meiji Shrine, a Shinto shrine which you reach by walking through a forest of evergreens. It was strange to one minute be in the middle of a bustling city and the next in total peace and solitutude walking down a forest path to an old shrine. We loved the wall of old sake barrels and by the temple is a wall of prayers and wishes written in lots of different languages on thin wooden shingles. 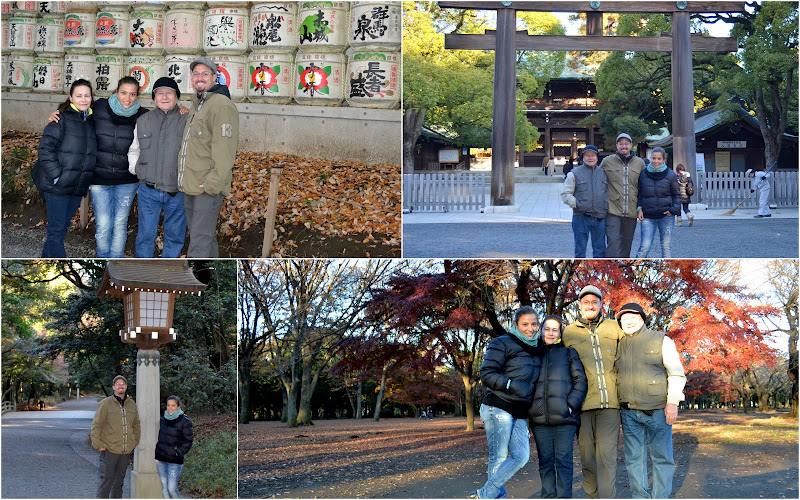 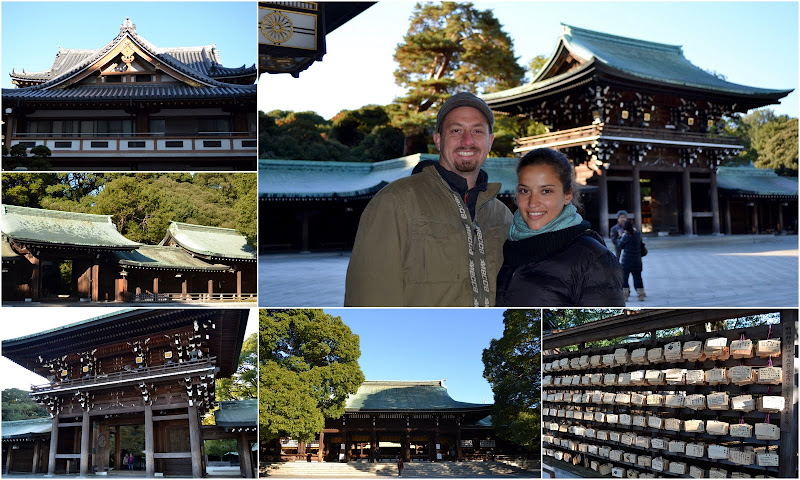 3.) Roppongi Hills – a modern and upscale neighborhood offering more high-end shopping and lots of restaurants/cafes. It is all impeccably manicured. Originally our plan for Roppongi was to see the city from the top of the Mori Tower. That was defused when they explained there was a lofty entry fee and that a similar view is available from the Ministry Towers for free. So our backup plan was to grab a quick bite and then pop back across town. Seeing as we don’t recall the names of the streets we walked, this will have to be a more general warning – do not simply pick a direction to try and find a lunch spot near the Mori Tower. Of course, we learned this the hard way. Nothing like 2 hrs of walking in a big circle to get your tummy rumbling. 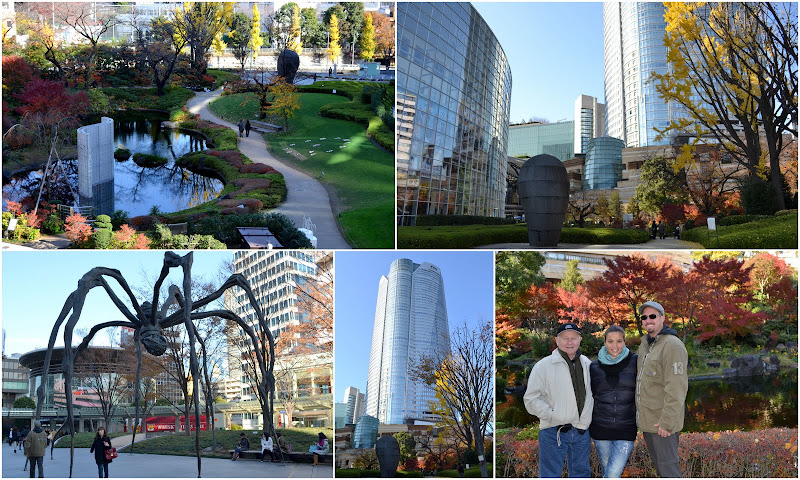 4.) City Streets – we did SOO much walking…probably more walking than we’ve done since the week we spent in Paris at the end of our first month of the trip. The photos below are a complilation of sights – the skyline view of the Tokyo Tower, the streets around Shabuya, and Hachiko Square. Tokyo felt so similar to NYC – if you just changed out the signage, we think you’d have a hard time telling them apart! 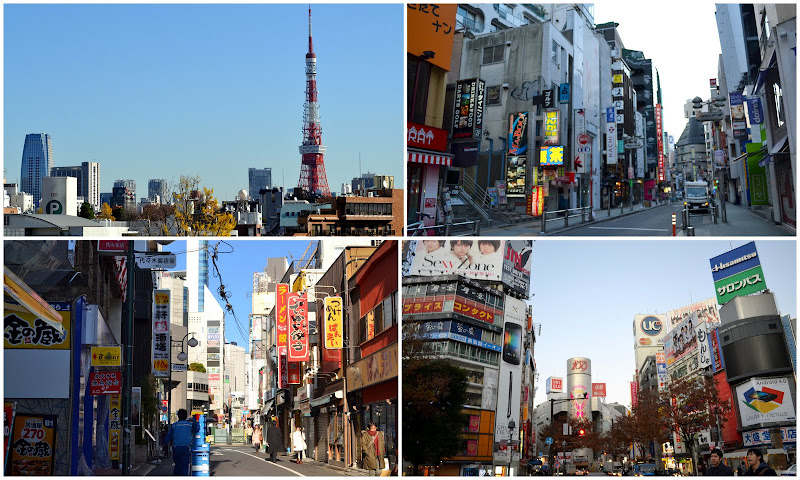 5.) Tokyo Bay – we were lucky enough to be in town for the Tokyo Motor show. It was a bit out of the way, but we got to see some amazing views of the Tokyo Bay from the train. The architechture is so unique! 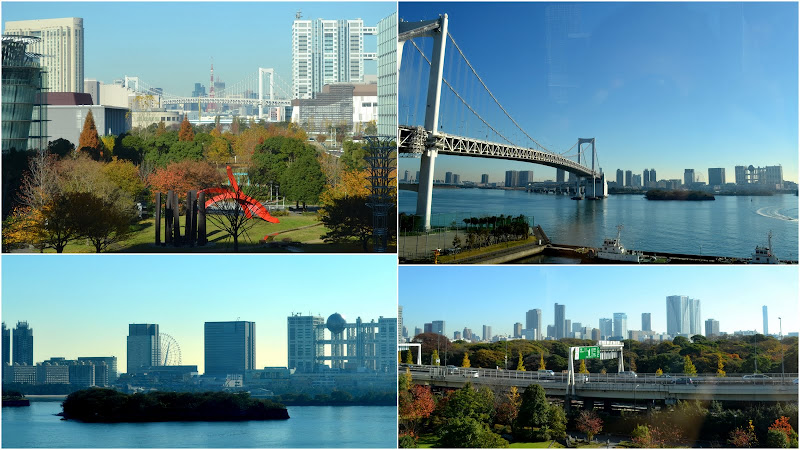 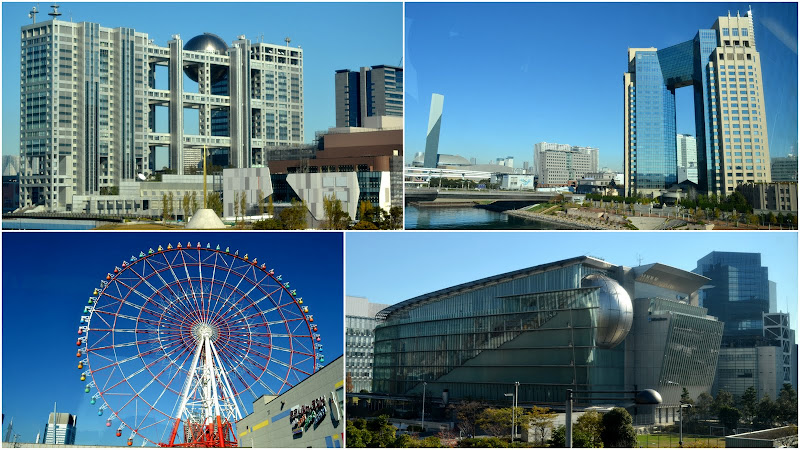 6.) Tokyo Motor Show – not for the claustorphobic, we visited on the last day and they were anticipating 900,000 visitors! The convention space was HUGE and pretty much every single car maker was there. While it was nice to see the new models, the coolest part was seeing all the concept cars! 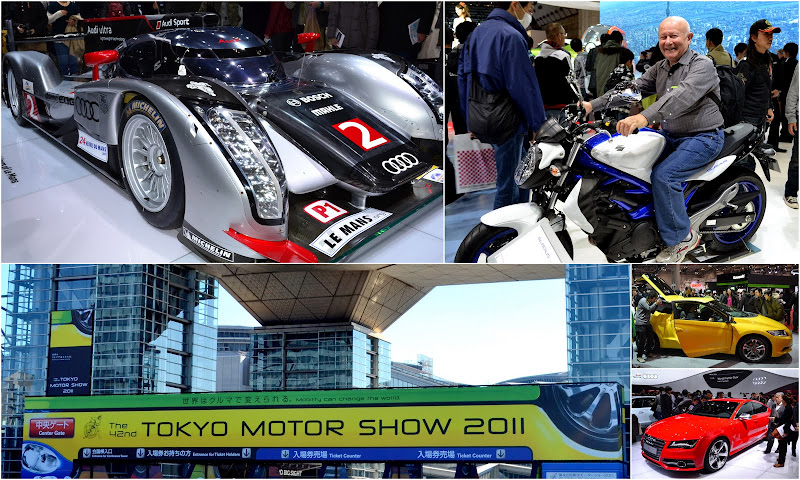 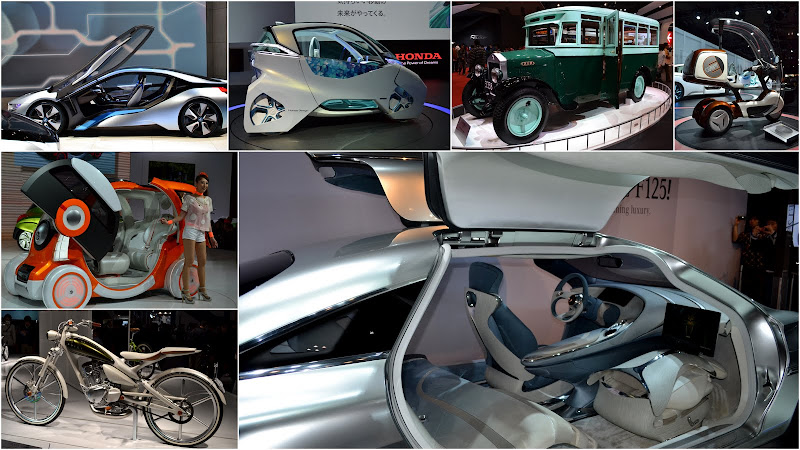 7.) At Night – Tokyo is so alive with bright lights and thousands of people out and about. 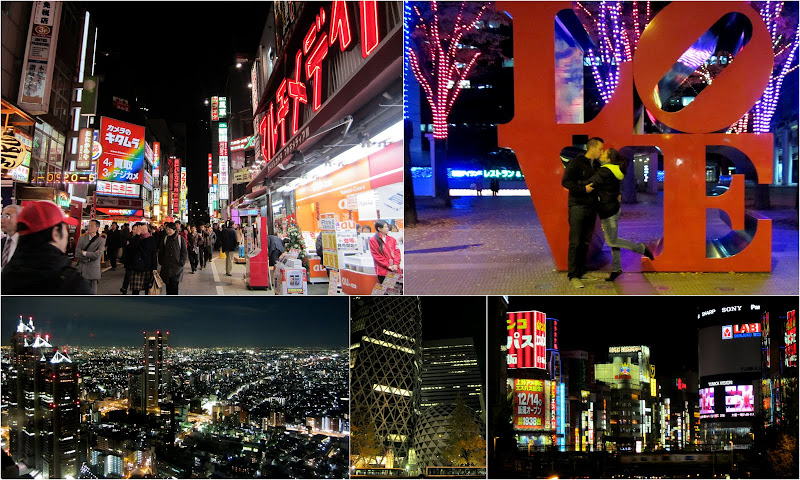 Tokyo was a blast and we were thrilled that it lived up to Grandpa’s and Mom’s dreams 🙂 Next up – Kyoto!