**Arrived on December 12th and departed for Thailand on the 15th

After leaving Tokyo, we took the high-speed train to Kyoto, which was once upon a time ago the imperial capital of Japan. A lot of people had recommended Kyoto to us because it had many of the original wooden temples still in tact. After several days in a very modern Tokyo, we were excited to see the more traditional side of Japan.

We lucked out with our accommodations and were pleasantly surprised when the cab rolled up to an upscale hotel instead of a hostel. It was excellently situated, right next to the main shopping district and the Nishiki market. 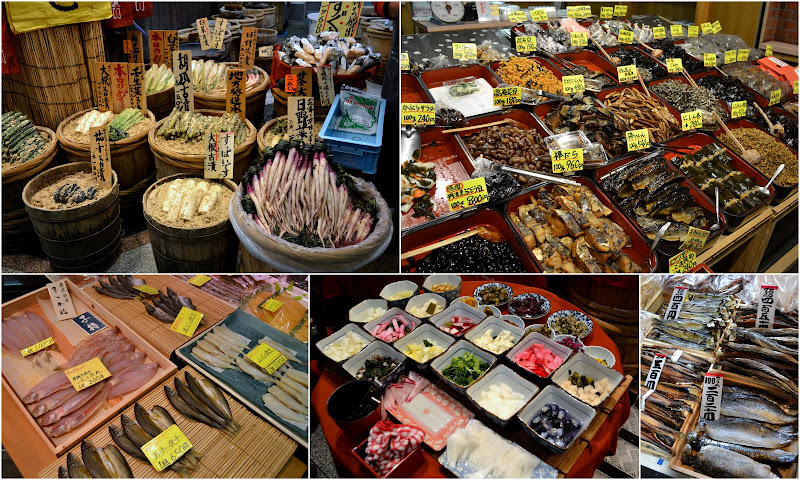 It never gets old walking around the local markets! All the food products, they way they’re prepared and displayed, are so unique – it’s truly a visual feast.

The next day we set out to visit the Fushimi Inari Shrine. We were quite surprised to find it painted a super bright shade of orange! 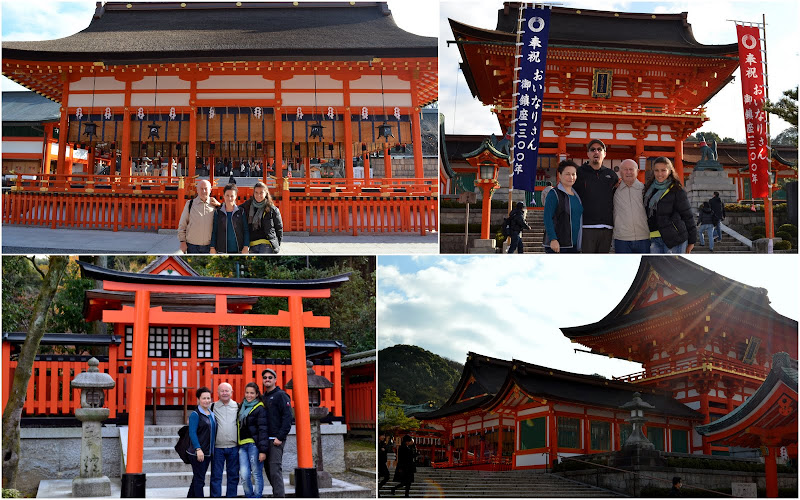 The shrine is very large and is just one part of a much more extensive complex. It’s most famous for its thousands of torii gates which decorate a labryinth of trails that lead through the woods and up the mountain behind the shrine. We of course failed to do our research ahead of time and had no knowledge of this, so when we set out to walk the trails we were a tad unprepared for the miles of walking and steps that lay ahead of us! 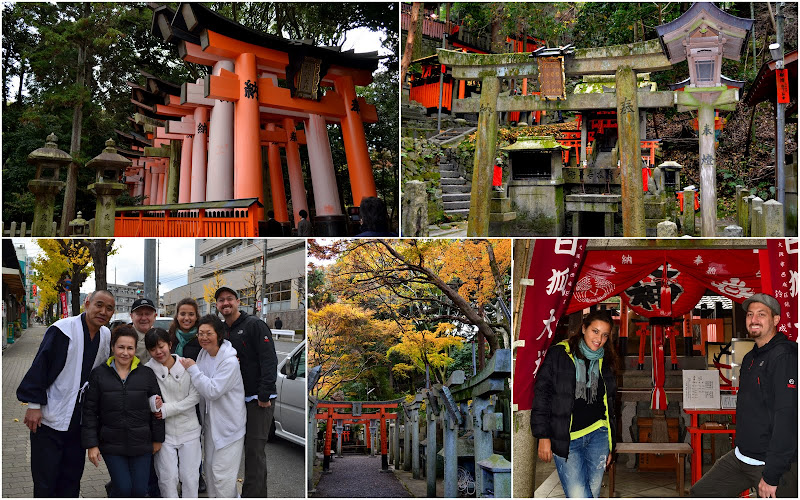 It was here, as we were walking along, admiring all of the torri and mini torri gates, gorgeous foliage, and buddha statues, that we had our coolest experience in all of Japan. Two women (a mother and her daughter), along with their personal monk, befriended us and invited us to participate in their prayer ritual. The monk would stop at various buddha statues along the path and he would perform a small ceremony at each that involved him putting a powder on our hands that we would pat all over our body, light incense, and then put our hands together and bow while he chanted a prayer. Now, nobody in our group is religious, so I can’t say we were spiritually moved by this experience, but it was definitely super interesting to see the ritual behind their prayer because it was so much more involved than just putting your hands together and saying a few words.

Once they were done and we were about the leave, they invited us to watch them during waterfall training. We had no idea what that entailed and figuring that we’d never have such an opportunity again to witness something so authentic, we happily took them up on their offer. They drove us to a private park in another part of Kyoto – it was so beautiful, but unfortunatley we weren’t allowed to take photos there.

After a quick prayer session, they scurried down some stone steps to where the waterfall was located. They undressed and put on some thin cotton robes. It hurt just looking at them because it was very cold that day. The point of the exercise is that the impact and force of the water is supposed to expel all the demons and ills out of you. Before heading under the water, the monk spent a good 5 minutes chanting loudly and using some kung-fu moves over their bodies as if to scare off whatever bad may be inside of them. Then they would stand under this very strong waterfall as he continued to chant – we can’t even imagine how freezing that must have felt or how much conviction and belief they must have in this process to do it monthly!! We felt very fortunate that they let us observe them – they were the nicest people and it was a very special experience for all of us.

After refueling over an incredibly delicious lunch of ramen, we headed to the Higashiyama district. This is a very quaint, old-style walking district with a cobble-stone streets that are lined with cafes and artisan shops. At the end of the street stands the Hokan-ji Temple and the Yasaka Pagoda – they’re at the top of the hill and the view of Kyoto below is quite beautiful. 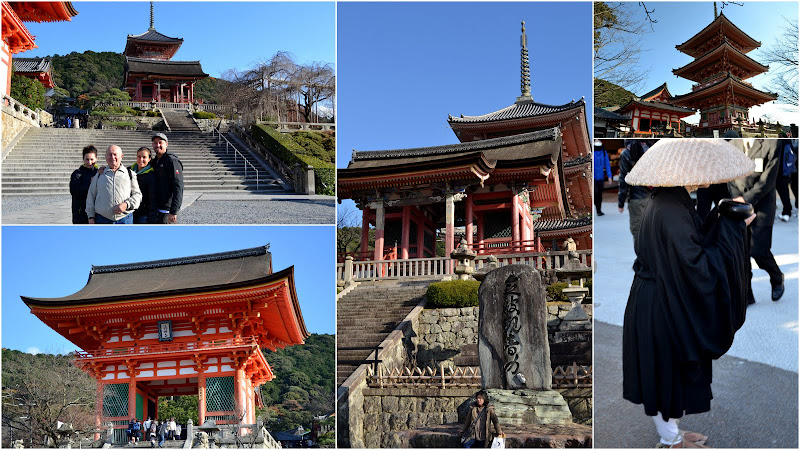 From Kyoto, Osaka is just a quick hour long train ride away. This was our last stop in our week-long jaunt across Japan! We had no idea that Osaka was such an expansive city – it was really much larger and more sprawled out than we had imagined.

Our first stop was the Osaka Castle. Its a very impressive structure, built on a wall of cut rocks and surrounded by a big moat. 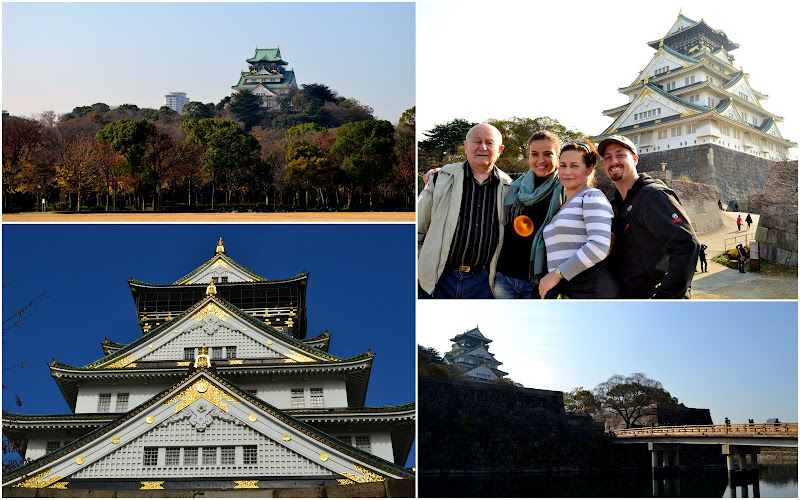 On the top floor is an observation deck that offers 360 degree views of Osaka. It’s a very modern looking city –  if we hadn’t told you this cityscape was from Osaka, don’t you think it could easily pass as the cityscape for any number of other cities around the world? 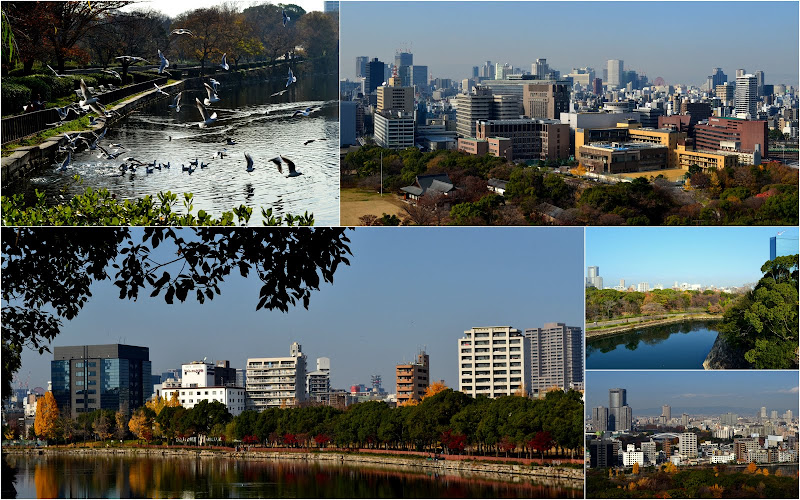 Since we had done a lot of sightseeing of markets and shrines, we opted for a change of scenery and visited the aquarium! It was the perfect way to end and amazing trip 🙂 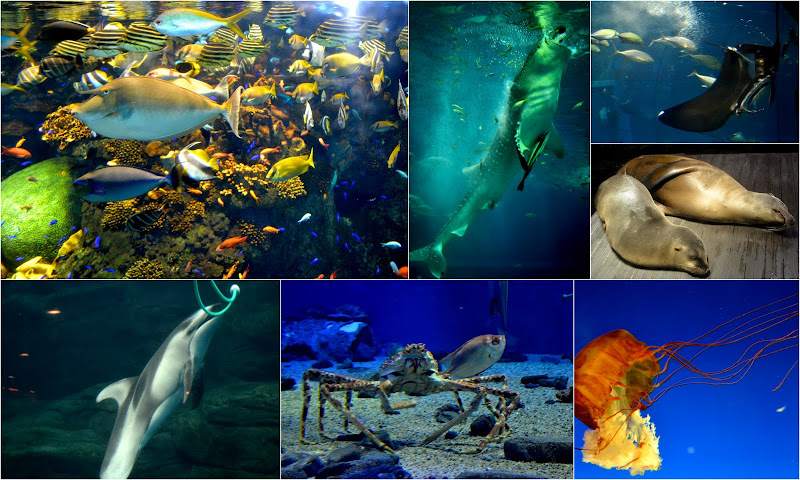 Next up…two weeks in Thailand!!