Yesterday was our first official day on the road. We picked up Bitsy and headed towards our first destination in Normandy, a town called Rouen. It’s a cute town with cobble stone streets, old architecture, and a beautiful clock tower. What wasn’t cute was that most of the shops were closed. We later found out that it was some sort of religious holiday and just about everything was closed in every town we went to.

From Rouen we headed to Bayeux to see the D-Day beaches and the Normandy American Memorial Cemetery. Before we go any further a quick side story about Bitsy…. Bitsy comes fully equipped with a GPS and we have already established in just one short day that without Bitsy’s built-in sense of direction, this trip would not be possible. Bitsy gives us the option of taking the fast route -the highway, or the short route – country roads. We chose to take the short route so that it would be more scenic. Val took a nap between Rouen and Bayeux and woke up to Chris cursing that we were low on gas and in the middle of a bunch of villages that apparently had no need for gas as we hadn’t passed a petrol station in miles. We proceeded to attempt to ask locals thru Val’s rudimentary memory of high school French, “ouest le petrol?” . Nobody could tell us until we luckily came upon an old man on a bike that pointed us in a direction but with instructions that we couldn’t understand. We ended up just heading towards the next big town, keeping our fingers crossed that our tank wouldn’t empty fully before we got there and luckily all turned out well in the end.

So back to Bayeux….because finding gas took so long, the cemetery was closed by the time we got there, but we did snap a pic in front of the gate. We also got to see the one of the D-day beaches, called Omaha Beach. It now serves as a pseudo racing track for kiting go carts. It was really windy, but the weather has been absolutely gorgeous – it’s sunny and not to hot and the sky is super blue with not a cloud to be seen. Fact of the day: we learned that only 31 Germans manned the bunker and the big guns to hold the beach. 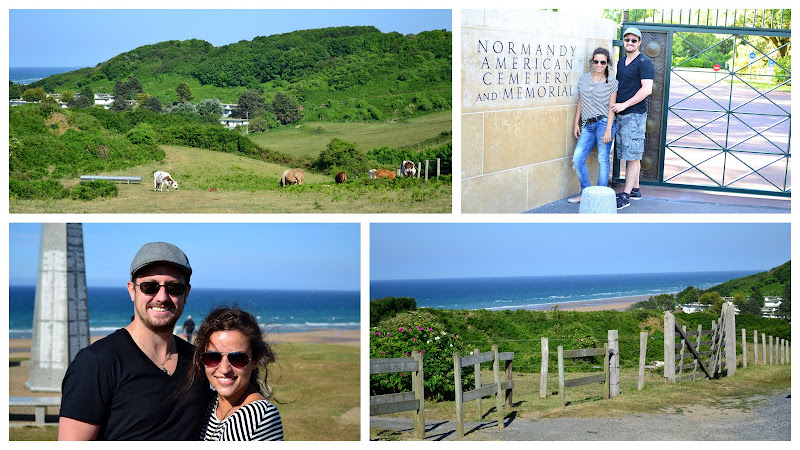 From Normandy we drove to Brittany region, to the coastal town of St.Malo. On the way we learned another fact about Bitsy. She likes to describe certain turns as half-right/left which we are not even close to getting right half the time. As you can imagine that makes for some fun listening to as Chris spews a bunch of expletives when we keep having to reroute. One of the nice things we’ve discovered is that the sun sets quite late here, around 9:30pm, so we get lots of time to sight-see. To describe St.Malo, think of a massive rectangular stone fort built onto a bluff. Inside everything is stone and is either a hotel, a creperie, or a tabac shop. We drove around the tiny alley streets trying to find a hotel as it was getting dark but everything was booked. Apparently there was some kind of event or festival or holiday but every hotel within 70 km was occupied so we had to drive an hour south to get one. We wish we could have gotten to see more of St. Malo, but to drive an hour back in the morning to just walk around and then drive an hour south again, just didn’t make sense, so we are pushing forward.