To have great friends in a beautiful city is truly the best thing one can hope for when traveling for an extend period of time. Val’s high school friend, Lucien, was kind enough to host us for a few days. He even gave us his bed – now that’s a true friend right there!

The adventure began as soon as we set foot on Dutch soil.  Lu had agreed to grab us at the train station but we never really formalized how that would work. The plan on our part was to give him a ring on his mobile as our train pulled into the station but no matter what combination of international codes, country codes, area codes or other random numbers we dialed we could not seem to connect. Feels like we should have it mastered by now.  Long story short we eventually logged onto the net and used the power of Skype to connect by ironically dialing the exact same combination of digits?

From Central Station we took the tram to his place. Lu’s apartment is beautiful. Spacious layout, tons of natural light and roof top access with one drawback….the climb up the stairs. It is not how many but rather what kind. Chris dubbed it ‘Mt. Lu’ because it’s pretty much a straight incline up! In the winter the building keeps a selection of ice picks at the bottom.

In addition to having a great pad he also lives in a great part of town, really popular, with lots of bars, restaurants, and shops just around the corner. To top it off there is an open market on his street 6 days out of the week – it’s pretty incredible, all of the sights and smells. Everything from produce to seafood, household products to flowers, and lots of clothing, shoes, and accessories. 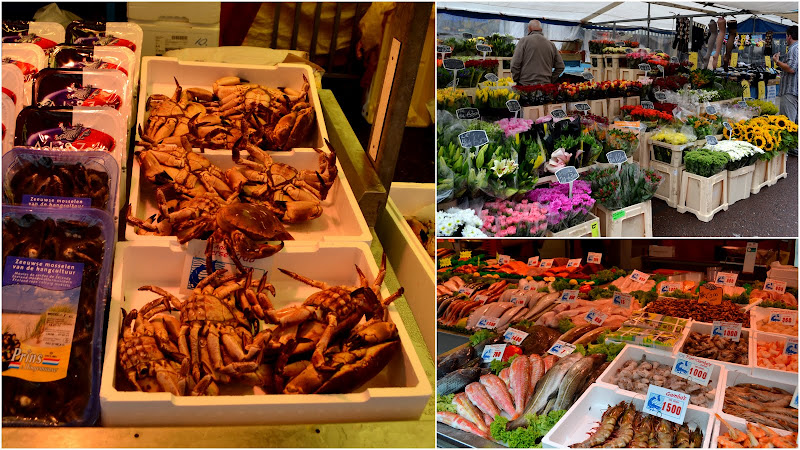 One of the first things Lu asked us was what we wanted to do while we were in Amsterdam and we both quickly answered no sightseeing! Paris really did us in – we ran around seeing everything and it kinda exhausted us, so we just wanted to spend time walking around and catching up with Lu.

The next morning Lu took us to a great pancake shop and we gorged on savory Dutch pancakes (think crepes), finished by these little mini pancakes that were topped with powdered sugar and served with half a stick of salted butter…it was little like heaven. 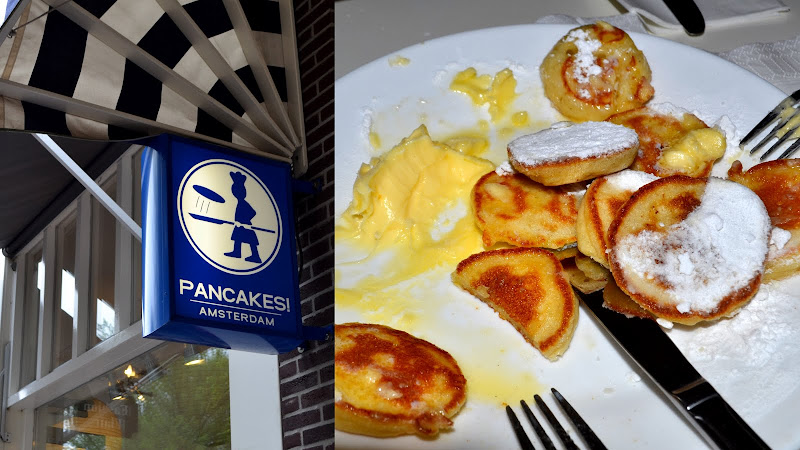 As we were walking around, Lu pointed out how a lot of the buildings in Amsterdam are pitched forward and have hooks at the top. This is so that people can use a pulley system to hoist items into their homes since most of the staircases are too narrow and steep to carry things in that way. Also, since Amsterdam sits on the water, there is problem with some buildings sinking, so every once in a while, we’d see a building that was leaning pretty drastically. Can’t imagine living in one of those! 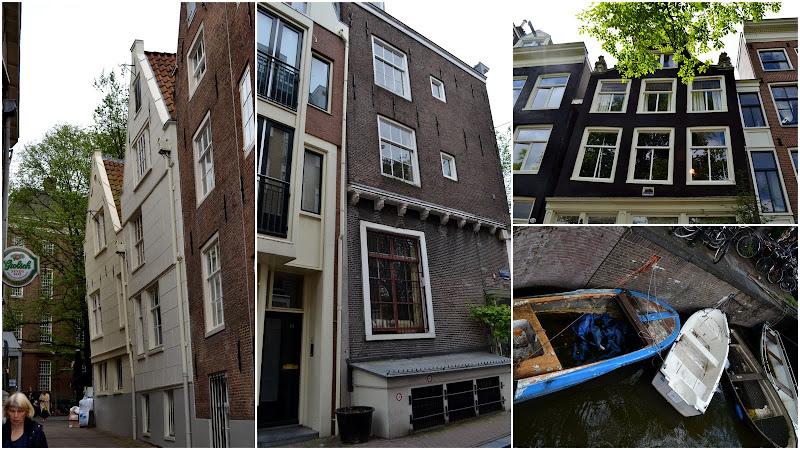 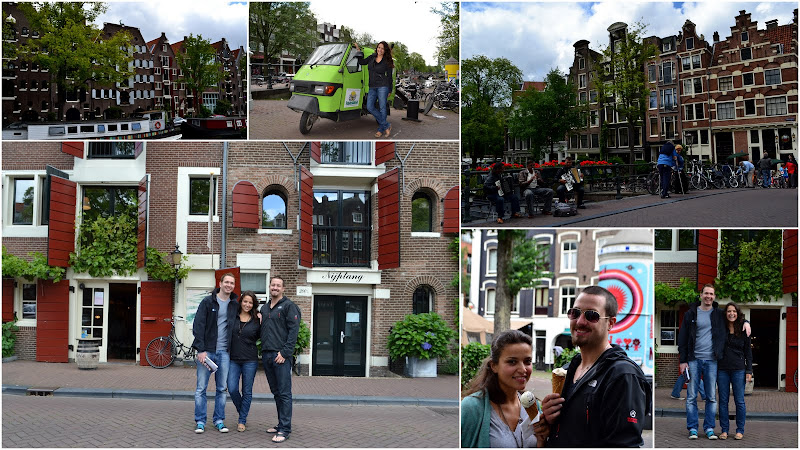 Amsterdam also has the most bikes we’ve seen anywhere – it’s really staggering, there are thousands upon thousands. They even have whole parking decks just full of bikes! Val’s favorite bike is one with a passenger bucket. It’s meant for little kids, but she has visions of sitting back and reading a book, while Chris peddles them around town 🙂 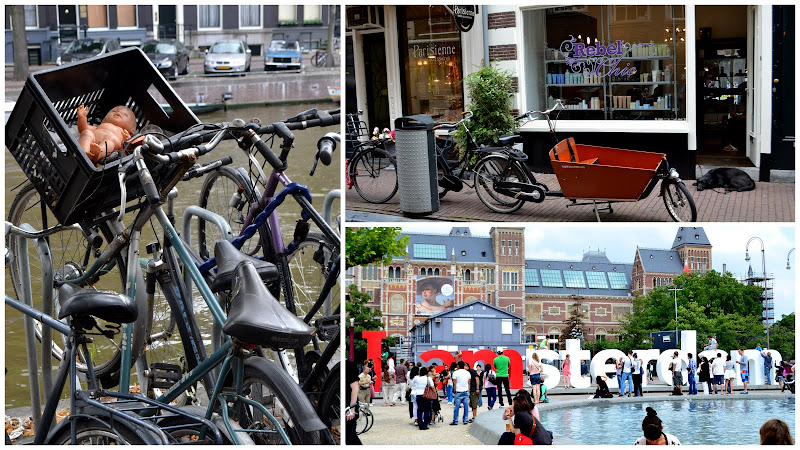 Note: Bike with random baby doll is not the type of bucket Val wants, it’s the other bike pictured, with the big wooden bucket.

In the evening we went to eat Indonesian food, which was quite delicious and then went to a bar for drinks. The place was called Bo Cinq. It was a lounge with a long bar in one room, a series of lounge chairs in another, a smokers room and a outdoor patio. We lounged inside and tipped back drinks with Lu and his brother Collin till the wee hours of the morning.

The next day, Lu took us to Vondel Park. Not nearly as big as Central Park, but it was very charming with beautiful landscaping, lots of people laying out and musicians playing tunes. We enjoyed some of the sun and then grabbed some beers on the terrace. On our way to and fro the park we walked the canal lined streets and Lu talked about some of the history and events of the city. We will be back one day to take part in the Queens Day celebration where the people of Amsterdam take to the canals, clog them up so nothing can move and then hop from boat to boat in true party fashion. 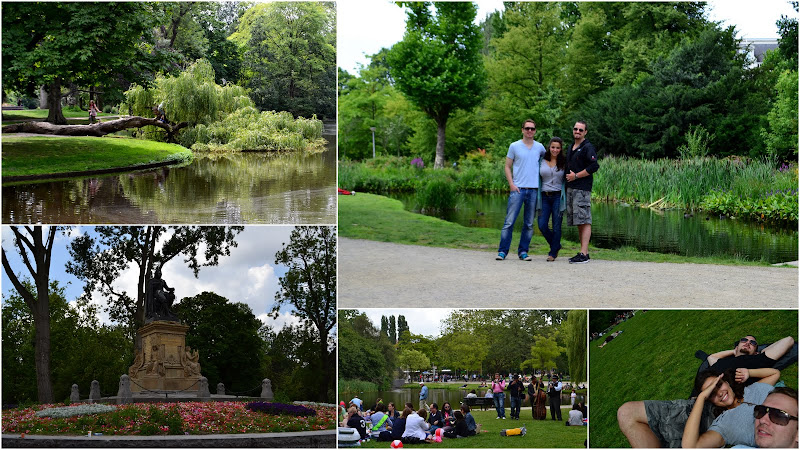 For dinner we went to Lu’s parent’s house for a barbeque with his family. After almost a month and half of being away, it was really great to be in a family atmosphere and to have a delicious home cooked meal and be amongst such fun company! 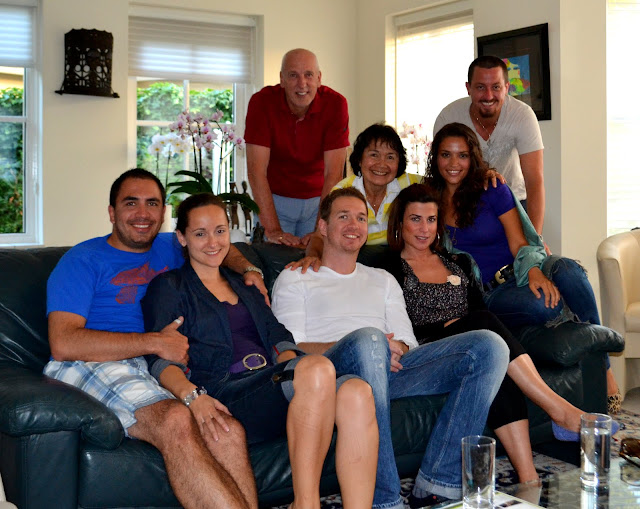 Thank you to Rien and Joke, Collin and Kim, Lu, and Stella for making the evening so fun! We hope to see all of you again soon!!