Laos had a lot of character and while we didn’t find it as ‘majestic’ as some people have, it was an adventure to see it. One could also argue we didn’t capitalize on some of its beauty by adventure trekking, but we knew we had plans to return to Northern Thailand for an extended stay at the end of the year and would be doing the same adventure stuff then. Also, being honest, the Mekong River did not look all that appetizing as something that we wanted to “adventure” in.

The flight from Luang Prabang to Siem Reap proved to be one of the most memorable of the trip. Here is a collage of photos Val took out the airplane window. 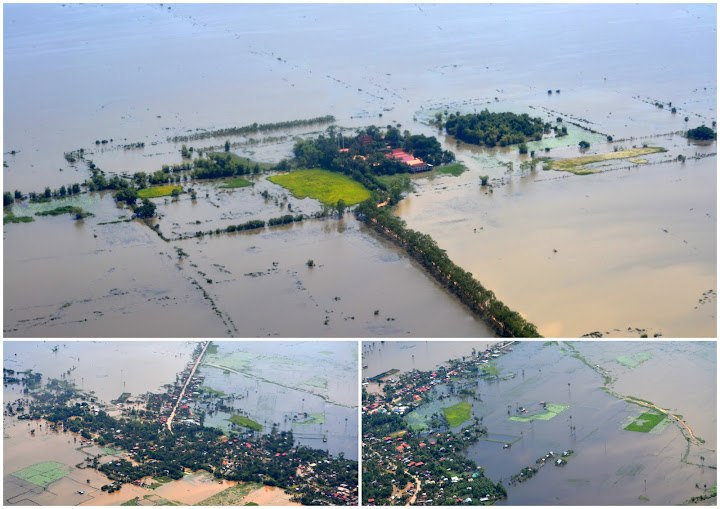 Keep in mind your geography here – from southern Laos to central Cambodia you are flying over land, not water. Like most of you, we had heard that the region was experiencing flooding, but we could never have imagined it was this bad. As the airplane descended and we curiously looked out the window at the terrain below we saw what looked like an optical illusion. You could see what appeared to be an ocean below us and it stretched for miles and miles as far as the eye could see. At first we thought the illusion was being created by some low clouds, but as we descended further it clicked that what we were seeing was the massive flooding. As you can see from the photos the entire country was under water with only the tree tops and tallest of structures escaping the blanket of wet.

Luckily Siem Reap was not under water and the plane was able to land just fine. After making friends with a fellow traveller while completing the inane immigration process and getting our visas, we decided to share a cab into town to our hotels. The cab driver explained that it is customary for Siem Reap to flood once a year or so, but that this year it had done so 3 times already and he had never seen the flooding this bad. There was even a question as to whether he would be able to drive our friend to her hotel as the flooding from a couple days past may not have subsided enough to allow access by car. Crazy!

Similar to Laos, our hotel in Siem Reap was spotless and quite frankly spectacular for the price. You can stay in guesthouses or hostels in this region for approximately $10 per person per night, but I don’t know why you wouldn’t splurge and stay at a nice hotel for $20 as it affords you a king size bed and a great breakfast every morning. 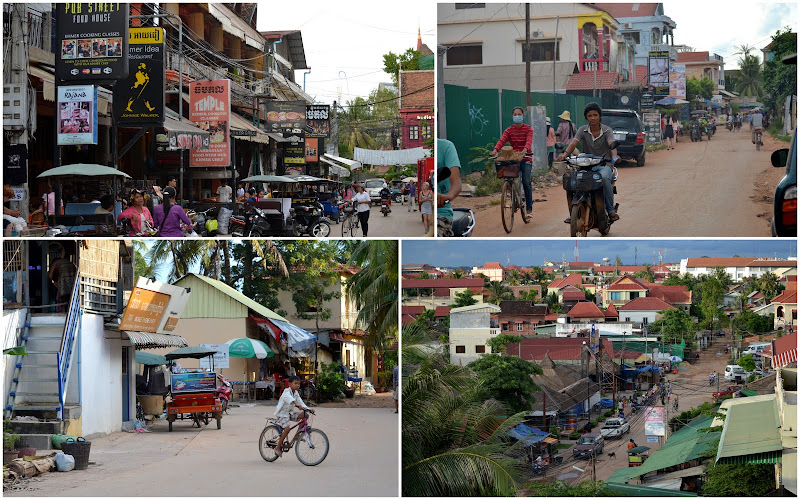 In the center of town is Pub Street and this is where the majority of restaurants and bars are located. Playing ‘Where’s Waldo’ for a moment with the photo above what piece of branding sticks out? Does everyone see Johnny? For those of you not familiar with the branding, the yellow man with the walking stick is Johnnie Walker and he is everywhere in this town. Putting an estimate on it, one out of ten restaurant vendors use this logo in there signage. The true irony is no one drinks the stuff and a couple bars don’t even have it available for sale? There is however plenty of beer being vended and it couldn’t get an cheaper, only 50 cents a pint! And if you get a fish massage, you get a beer for free! 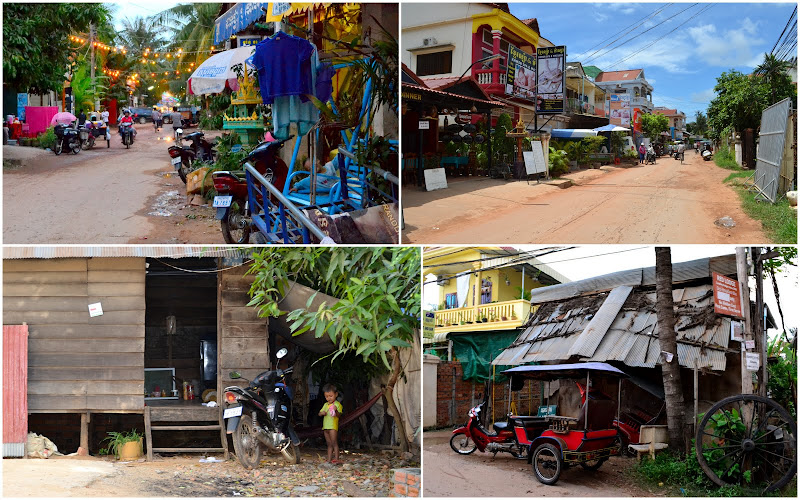 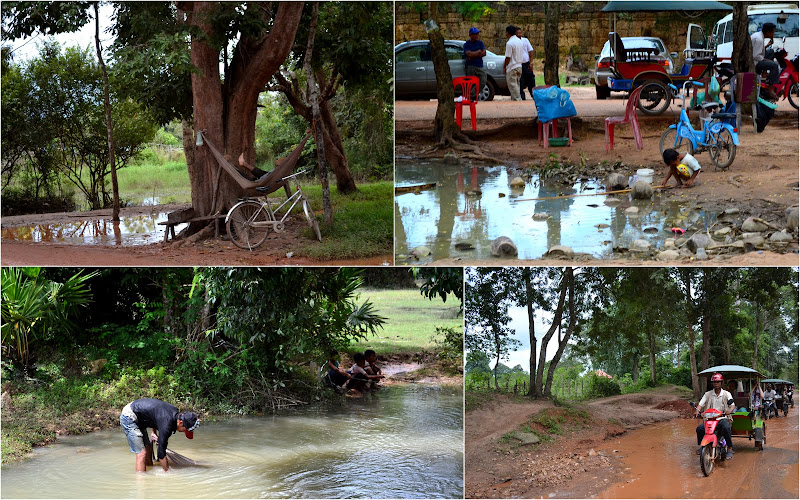 The best restaurant we found in town was called Aha and the highlight of the meal was the dessert course – honeycomb with vanilla bean ice cream and steamed chocolate cake with raspberry sorbet. This place stood out above the rest on the block. It was definitely on the pricier side, we paid about $50 bucks for an appetizer, two main courses, three desserts, two glasses of wine, and a large Perrier, but the food was first rate and this same restaurant experience would have easily cost us 3x in NYC.

Following our practice of checking out the top restaurant suggestions on Tripadvisor, we also visited a place called Touiche which was rated #1 and had hundreds of great reviews. Touiche is a short hop out of town, so we had to pay a whopping $3 to a tuk-tuk driver to take us there. Of course our tuk-tuk driver had no clue where the spot was and outside of the main road no one uses road names to navigate, so we had to rely on his knowledge of a nearby temple. The guy was kind of a dolt, so when he refused to take us all the way to the restaurant we just hopped out and took it upon ourselves to walk the rest of the way. Well there was a reason that he refused to cross through the temple to the restaurant. The reason was a 20 ft mud-puddle-pond which blocked the entire road. We are now outside of town, off the beaten path, the sun is setting, and we’re at an impasse to getting to our dinner reservation. Flagging down another tuk-tuk was not an option, so Chris ventured off to see if we could go around the massive puddle through a graveyard – no such luck. Just as we were about to give up and huff it back to town, a little lady who spoke no English pantomimed to us to wait patiently, someone from the restaurant was coming to picks us up. Sure enough a waiter emerges on a scooter and scoots his way through the puddle in expert fashion. Val is told to hop on the back as he will take us across one by one. A bird’s eye view would have made for a comical show, but we made it safely across and most importantly dry. The food was great and for our return trip the owner took us back to the city with another couple in a hefty looking Jeep. We grabbed coffee and dessert with the couple who were also from NY. They had just been jungle trekking in northern Thailand and had some crazy stories to tell, which may alter our path later in the year. We will see how much of the experience they had comes true in our own adventure. 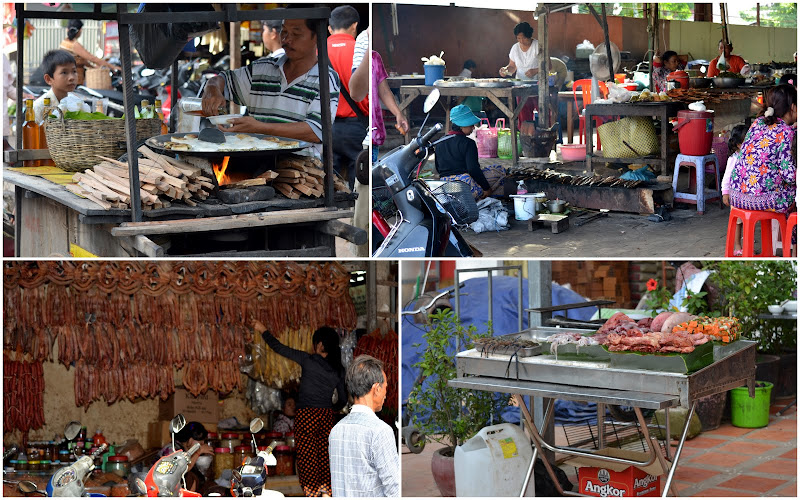 As for the markets, Siem Reap offers a couple of day markets and a large night market. Both sell the same stuff and even though we were hundred of miles farther east from Europe a lot of the goods were of the same ilk. 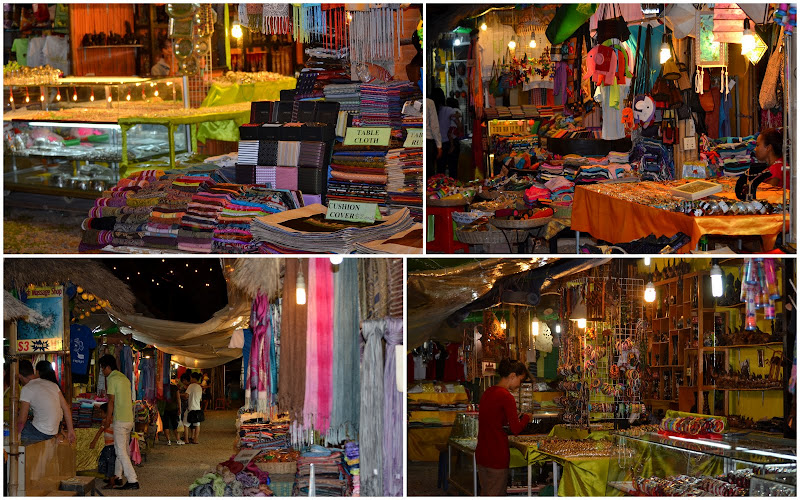 One of the more interesting parts of the market scene is the volume of hand painted pieces depicting the temples, Buddha, the monks or local flowers. There are hundreds of paintings, so you would expect a wide variety of subject material. Unfortunately not – it appears all the artists have been taught by the same guy and crank out an endless stream of the same content. It is really a shame as the art is cheap and if we felt it was unique we likely would have bought a bunch. For the life of us we can’t figure out why they use the cookie cutter approach? 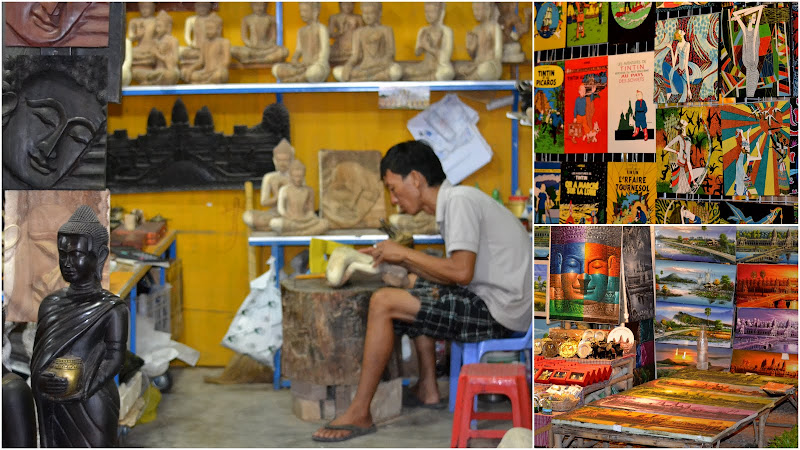 So keep in mind the pictures at the top of this post of Pub Street on day one when we first arrived. Here is picture of it just a couple days later. 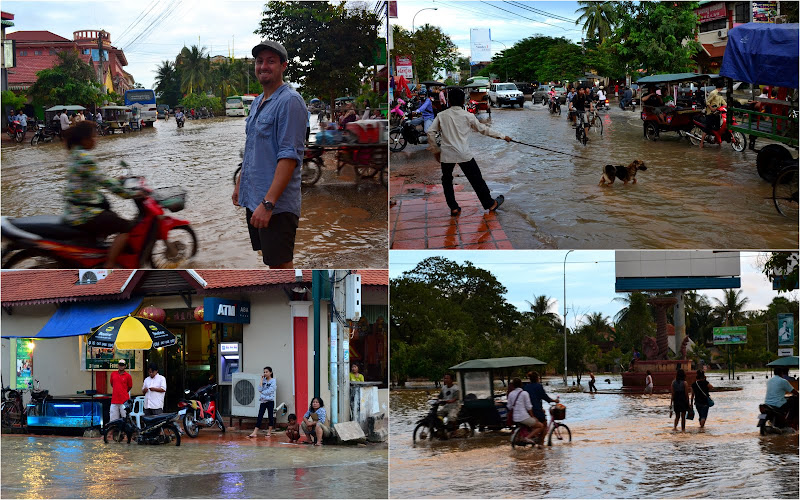 There were apparently torrential rains to the north which caused the river to over flood its bank, yet again, and cause this flooding in the main town. Of course this greatly limited our food options, as Val refused to traverse the waters to get to the restaurants. As luck had it, our hotel was located on the one street that stayed above water the entire time, so at least we stayed dry! We found a great place right around the corner from our hotel to have our last dinner in Siem Reap. 4 beers, one appetizer, and two delicious mains – only 7 bucks!! 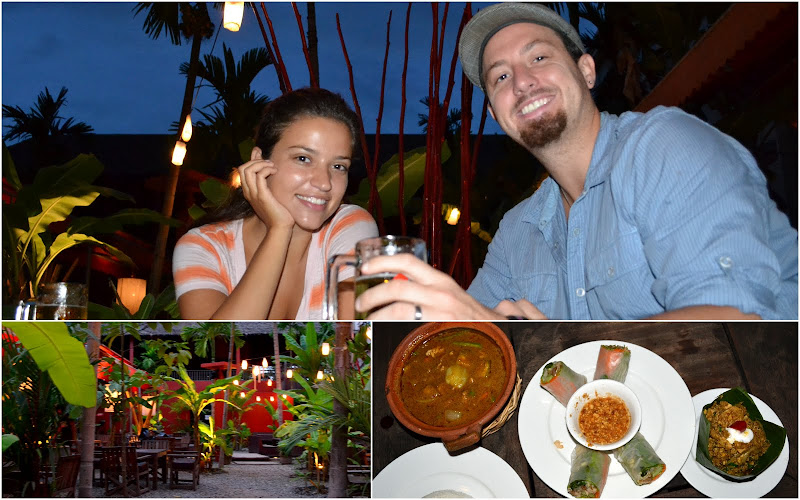 Next post – our tour of Angkor Wat and the surrounding temples! Get ready for photo overload 🙂